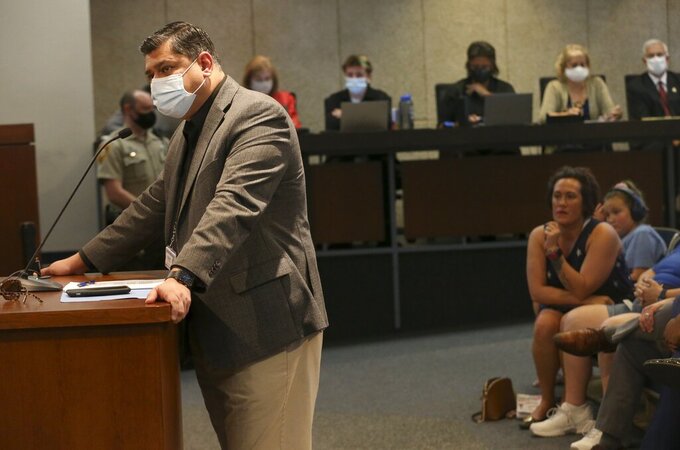 St. Louis County Health Director Dr. Faisal Khan said in response, he raised his middle finger at a crowd gathered at a St. Louis County Council meeting, according to a Wednesday letter obtained by the St. Louis Post-Dispatch.

“After being physically assaulted, called racial slurs and surrounded by an angry mob, I expressed my displeasure by using my middle finger toward an individual who had physically threatened me and called me racist slurs,” Khan wrote to the councilwoman who led the meeting.

St. Louis County Council voted 5-2 on Tuesday to end the county’s mask mandate, saying the county executive did not consult with them before issuing it. County Executive Sam Page has insisted the mask mandate is still in effect, despite the vote.

Orders took effect Monday there and in the city of St. Louis, requiring everyone age 5 or older to wear masks inside public spaces and on public transportation even if they are vaccinated.

Khan was at the Tuesday meeting to defend the mask mandate.

While testifying, Khan said members of the crowd mocked his accent. As he left, Khan said he was shoulder-bumped, then surrounded by a crowd and called a racial slur.

He also called out Councilman Tim Fitch for what Khan described as a xenophobic dog-whistle in asking Khan about his credentials.

“Dr. Khan, we certainly have heard of your background before, but most here have not,” Fitch said during the meeting. “Can you tell us why you’re called Dr. Khan? Are you a physician in the United States?”

Fitch told the Post-Dispatch that the question was meant to familiarize the crowd with Khan's background.

“The entire letter is another desperate attempt at deflection and diversion by Sam Page,” Fitch said told the newspaper. “Dr. Khan knew he was in trouble for (giving the middle finger), and this was an opportunity to put that on someone else.”

Khan said his response in flipping off the audience risked distracting from his main message to promote vaccines. But he also said in light of the “racist vitriol” he said Fitch has been stoking against him, “I cannot say I'm sorry.”

The county executive's office is working to gather more information about what happened.

“These actions against Dr. Khan are troubling and under investigation," Page said in a statement. "The behavior he has detailed is shameful and cannot be tolerated.”