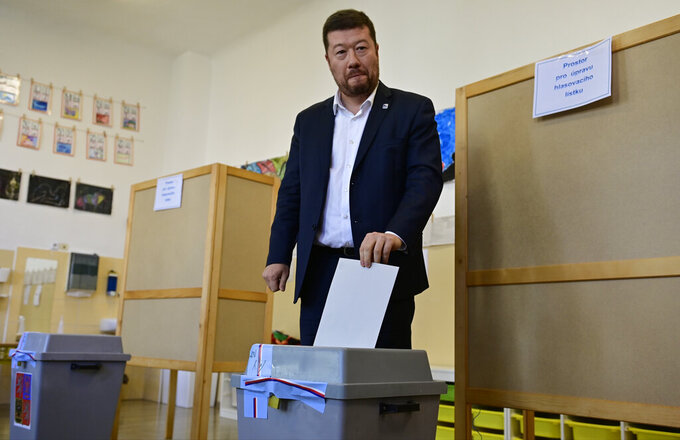 PRAGUE (AP) — Czechs begin voting Friday in a parliamentary election with polls showing Prime Minister Andrej Babis, a populist billionaire, has a good chance of keeping his job despite a new scandal over his financial dealings.

Two days of balloting are being held to fill 200 seats in the lower house of Parliament, the main legislative body in the eastern European country that's a member of the European Union and NATO.

Euroskeptic Babis, 67, has had a turbulent term featuring numerous scandals. Among them, police recommended that he should be indicted over alleged fraud involving EU subsidies, and a recently published EU report concluded that Babis has a conflict of interest over subsidies from the bloc involving his former business empire.

However all polls favor his centrist ANO (YES) movement to come first with at least 25% of the vote. But it’s not clear if Babis will win big enough to be able to form a new coalition government.

“What we need is stability in these turbulent times,” Babis said Friday after casting his ballot in northern town of Lovosice. “We shouldn’t change the government now.”

Findings by the International Consortium of Investigative Journalists, dubbed the “Pandora Papers,” alleged that Babis put $22 million into shell companies to buy 16 properties in southern France. The Pandora Papers presented details of how many of the world’s richest and most powerful people allegedly hide their wealth from tax collectors.

The French properties were not disclosed in the prime minister’s required asset declarations, according to documents obtained by the journalism group’s Czech partner. Babis has denied any wrongdoing and claims that the recent report was meant to harm him in the election.

Babis has led a minority coalition government of ANO and the leftist Social Democrats. He has also governed with the support of the Communists, who oppose the country's NATO membership and who thus gained an indirect share in running the country for the first time since the collapse of the communist-run Eastern Bloc in 1989.

Both the Social Democrats and the Communists might struggle to win any parliamentary seats at all this time.

Five opposition parties have put aside their differences to create two coalitions aimed at ousting the euroskeptic prime minister from power.

The center-right Together coalition consists of the conservative Civic Democratic Party and Christian Democrats and the liberal-conservative TOP 09 party. The liberal Pirate Party and STAN, a group of mayors and independent candidates, formed a center-left coalition.

Each coalition is predicted to win about 20% of the vote, and they have both signaled that they would cooperate in forming a new government if given the chance.

Babis has bet on an aggressive campaign, with migration a major topic even though his country is not a typical destination for migrants and refugees. He invited Europe's anti-migration champion, Hungarian Prime Minister Viktor Orban, to attend a campaign rally.

Babis has also pledged to protect Czech sovereignty, which he has claimed is threatened by the EU, and has accused his main opponents in the election of being “controlled” by Brussels. Babis is also critical of the 27-member bloc's plan to tackle climate change, saying it would hurt the country's economy and is responsible for high energy prices.

He hasn't ruled out forming a coalition with Freedom and Direct Democracy, an anti-migrant, anti-Muslim party that wants to lead the country out of the EU and hold a referendum on NATO membership. The party is polling at a bit over 10%.

The election will determine “if we will be moving towards Brussels to lose Czech sovereignty and independence,” Freedom and Direct Democracy leader Tomio Okamura said on Friday.