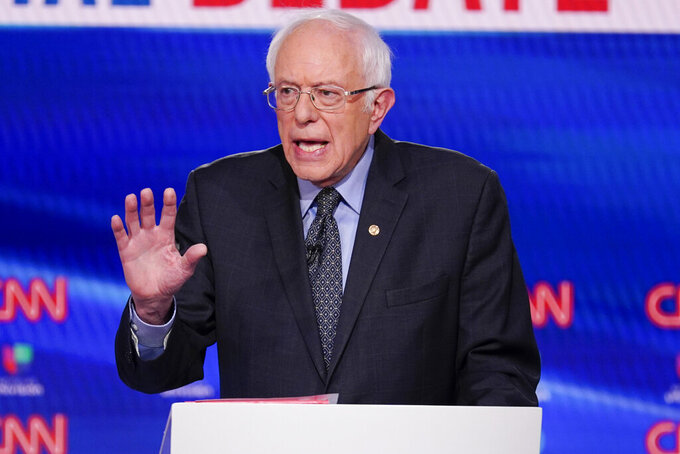 WASHINGTON (AP) — Stinging from the disappointment of Bernie Sanders' loss in the 2016 Democratic presidential primary, supporters pumped millions into the powerful advocacy group Our Revolution to keep the progressive fight alive and prepare for another swing at the White House.

But after another defeat in 2020, the 79-year-old Vermont senator is unlikely to run for president a third time. And the organization centered on his fiery brand of politics is undergoing a rebranding.

Rather than insisting on “Medicare for All” — Sanders' trademark universal, government-funded health care plan — or the climate-change-fighting Green New Deal, Our Revolution is focusing on the more modest alternatives endorsed by President Joe Biden. Those include expanding eligibility for the existing Medicare program and curtailing federal subsidies for fossil fuel companies. The group says it wants to make sure Biden keeps his promises on those and other top issues.

The shift reflects a progressive movement that is at a crossroads. Biden won the Democratic nomination last year by offering more centrist alternatives to much of Sanders' agenda. Since then, progressive candidates have faced a series of electoral disappointments and are contending with anxiety from moderate Democrats worried that the party's leftward shift could cost them control of Congress during next year's midterm elections.

And, for the first time since 2016, Sanders is no longer the undisputed leader of the left.

“Coming out of Bernie’s 2016 campaign, in some ways the organization was probably more of a bridge organization between the two electoral cycles,” Joseph Geevarghese, Our Revolution’s executive director, said in an interview. “What we’re trying to build is something that is longer term" and "part of the overall ecosystem of the progressive movement.”

“I think we are rooted in a bold, progressive vision, but we’re also pragmatic progressives,” Geevarghese said.

Sanders, who now heads the powerful Senate budget committee, can't legally work with outside political groups like Our Revolution. But many of his top allies have been closely aligned with the group since its August 2016 founding.

Despite the group's change in emphasis, it remains deeply engaged in progressive politics. Its Ohio chapter has contacted more than 190,000 voters ahead of next week's Democratic primary to replace Rep. Marcia Fudge, who left Congress to become Biden's housing chief.

Former Ohio state Sen. Nina Turner, one of the top voices in Sanders' presidential campaigns and a former president of Our Revolution, is competing in a crowded Democratic field that has emerged as one of the final tests of the left's political strength this year. Her principal rival, county councilwoman Shontel Brown, has been endorsed by Hillary Clinton, House Minority Whip Jim Clyburn and the Congressional Black Caucus' advocacy arm.

“I need you, whether you live in this district or not, to help us turn out the vote,” said Turner, joining a video chat from a grocery store parking lot. "Our Revolution family, please keep doing what you are doing.”

Sanders himself will campaign for Turner this weekend, and Our Revolution's all-out effort for one of his key acolytes shows that the group is not yet ready to distance itself from the democratic socialist. But Geevarghese said Our Revolution has forged an identity beyond its highest profile ally.

“Is our brand identified with Bernie? Yes. But it’s really not the individual more than what he stands for," he said, "and we’re still committed to that.”

Turner's race also exemplifies Our Revolution's renewed emphasis on on-the-ground organizing. It depends on roughly 600 chapters around the country who train activists to more efficiently mobilize behind candidates or causes — like cities raising their minimum wages to $15 per hour, even as the federal proposal to do so languishes in Congress.

Geevarghese dismisses perceptions that moderate Democrats are on the rise as “fuzzy math.” He notes that, some higher profile races this year aside, progressive candidates endorsed by Our Revolution have made down-ballot gains nationwide.

“We’re building a bench," Geevarghese said, "and the establishment should take notice.”

In Congress, in addition to its more modest health care and environmental goals, the group is prioritizing passage of a major bill to make voting easier. While the bill faces significant hurdles, it would counter voting restrictions passed by many Republican-controlled legislatures.

“We’re not getting Medicare for All, but we can get major pieces of it,” Our Revolution Board Chair Larry Cohen said on the same call where Turner spoke. “But we’ve got to fight with every one of the Democrats. No Republicans are going to vote for any of these things."

California Rep. Ro Khanna, a member of the House Progressive Caucus, said Our Revolution has mastered an “understanding of the minutia” of policy better than many activist groups. Recently, the group's focus has been "translating the ideals into practical wins,” Khanna said.

That's a far cry from the group's founding, when some activists worried that it was the kind of outside fundraising organization that could make Sanders — and his denunciations of big-money politics — look hypocritical. Sanders also spent the 2020 presidential campaign saying he didn't want a super PAC, and even though it is a nonprofit that doesn't produce campaign advertising, Our Revolution effectively acted like one for him in other ways.

Now, though, some other progressive organizations salute Our Revolution as further mobilizing grassroots activists heartened by Sanders' strong presidential runs.

“You can see a real change in the trajectory of where the Democratic Party is when it comes to the big investments, the use of government levers to improve people's livelihoods, the fight against climate change,” said Erich Pica, president of Friends of the Earth Action. "That is Our Revolution and Sen. Sanders really energizing that progressive base out there — and that base has made itself known in the electoral context.”

With the midterms approaching, Our Revolution doesn't plan to stop supporting progressives who challenge more moderate Democrats in primaries — even as the party clings to its narrow majority in both chambers.

“We want to have a united party going in, and that means mainstream Democrats have to make progress on our policy priorities," Geevarghese said. “They can’t just talk the talk in the campaign and then get elected and then say, ‘Oh, it’s not doable.’”