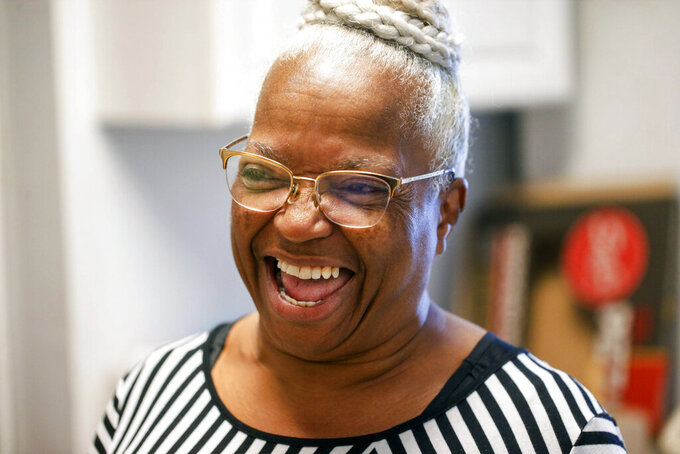 Shaban Athuman, ASSOCIATED PRESS
Pastor Mary Gleaton chats with her congregate on Thursday, Oct. 13, 2022 in Richmond, Va. The Underground Kitchen Community first meal program has been reaching out to community group since the pandemic offering healthy, nutritious meals. They have been delivering meals to Faith Covenant Christian Fellowship Church, who serve the Mosby Court Community. (Shaban Athuman/Richmond Times-Dispatch via AP)

RICHMOND, Va. (AP) — Before the pandemic, The Underground Kitchen was known for its glamorous, sold-out, $150-per-plate dinners from top chefs in secret locations.

But when the pandemic closed down bars and restaurants, UGK was shuttered, too.

“For weeks, we didn’t know what we were going to do. We had refrigerators full of food and folks who couldn’t work. We decided we were going to make meals for anyone in Richmond,” founder Micheal Sparks said. “Whatever your socio or economic background was, you could have a free meal. We wanted to spread a little love in the city.”

During its first week, UGK delivered 175 meals to the public. They began working with agencies around the city to deliver meals to the food-insecure and poverty-stricken areas in the city, especially in the East End.

Now, UGK has served more than 225,000 meals to those in need and launched its nonprofit arm, The Underground Kitchen Community First Meals Program.

“This is a community facing high blood pressure, diabetes, heart disease. We wanted to introduce healthy, chef-prepared, organic, free-range food that is tasty and that can make people feel better,” Sparks said.

In 2021, more than 34 million people, including 9 million children, faced food insecurity, according to the United States Department of Agriculture. Families in low-income urban areas often live in “food deserts” with limited access to a grocery store, which makes it harder to access healthy food. Now, with inflation, grocery stories prices have soared 13.5% in August from the year before, the highest annual increase in over 40 years, according to government data, making it even harder for low-income families to access healthy food.

“There’s no one doing fresh, prepared, organic food for this community. That’s why we stepped in,” Sparks said.

“This right here, this one is my favorite,” Serena Pittman said, pointing to the collard green soup. It’s made with fresh collard greens, chard, strawberry spinach, rice and roasted pork.

Pittman lives in the neighborhood and stops by the church with her nephew to pick up meals throughout the week. Pastor Mary Gleason works hard to receive food from Food Lion and BJ’s that she uses to help feed the community. But the fresh, chef-prepared dishes from UGK are a neighborhood favorite.

“I’d rather have greens than meat,” Pittman said. “And my nephew eats it up.”

Besides the collard green favorite, Jermaine Carson dropped off cabbage soup, brimming with fresh cabbage and tomatoes, and beef stew, with seasonal root vegetables and herbs.

Carson is the kitchen manager in UGK’s Community First Meals Program. After spending years in Richmond restaurants and catering, he said cooking for UGK’s meals program “is a chance to do something positive. It’s good to see the food I’m cooking is touching people for the better. It’s not fast food. It exposes people to a healthy lifestyle.”

His niche is healthier soul food.

“Some people think that with Southern food, all the flavor comes from butter and fat. But I like to show how you can incorporate healthy flavors, and people won’t miss the fat or the butter,” Carson said.

“We believe that everybody deserves access to fresh, healthy food wherever they are,” Anna Ibrahim, executive director of the farm, said. “We’ve very mission aligned with UGK in how we view the scope of the problem in the communities we serve. Fresh food shouldn’t be out of reach for anybody.”

“Micheal calls it ‘food with dignity,’” Kate Houck, Sparks’ business partner in UGK, said. “It’s from our hearts to theirs. We want them to feel cared for. That’s very important.”

“We’ve always promoted chefs of color, women, minorities and members of the LGBTQ community in the industry,” Sparks said. “What we’re doing is kind of new in the industry. We’re promoting diversity through food and beverage, which is really special.”

Chef Hamidullah Noori, owner of The Mantu, a modern Afghan restaurant in Carytown, credits UGK for helping launch his career.

After serving as executive chef at the five-star Kabul Serena Hotel, Noori, along with his family, fled Afghanistan in 2015 when conditions became too dangerous to stay.

He was introduced to Sparks and Houck, who tapped him as a headlining chef for countless dining events throughout Virginia and beyond.

“It was the first time I was preparing a modern style of cuisine from Afghanistan, which became The Mantu,” Noori said. “We traveled everywhere and cooked from North Carolina to D.C.”

Noori formed a fast friendship with Sparks and Houck, who helped him launch The Mantu.

“Everything that you see in the restaurant is designed by UGK, starting from the table to the menu to the plating, the wine and cocktails. When I was opening the restaurant, Micheal even drove with me to Alexandria to pick out the silverware,” Noori said. “I owe him a lot. I call him my Black brother.”

During COVID-19, when the kitchen was closed, Noori helped at UGK on Oliver Hill Way, preparing soups for the Community First Meals program.

“We wanted to create a safe space for chefs to cook, for chefs to get to know restaurant literacy, legal literacy and financial literacy so that they can go to the next level,” Sparks said.

“For Micheal and Kate, it’s not about the money. It’s about introducing unknown chefs to the world,” Noori said.

Calvette Clanton didn’t know what to do when the pandemic closed doors and residents had to stay in their homes at Armstrong Renaissance, the new mixed-income community that is replacing Creighton Court in the East End.

“We’re a new non-profit to Richmond. 30% of our residents came from Creighton Court,” she said.

“One of the biggest issues this community faces is being a food desert. We’re struggling with access to fresh fruits, fresh vegetables,” Clanton said.

When the pandemic kept everyone inside, Clanton struggled to find resources to keep the residents safe and stable in their homes, especially the seniors. As the community life services coordinator, she reached out to UGK, which began delivering soups for the seniors.

“Micheal and Kate have a clear passion for feeding the community,” she said.

Now, Armstrong is working with UGK to develop a program of healthy meal kits for families and seniors.

“With seniors, you can’t go to a food bank and get a meal that’s customized to your nutritional needs. If you’re fighting high blood pressure, you don’t want a meal that’s high in sodium. UGK will be developing one-pot meals for them. We’re looking to track over time the health impact this food is making for our seniors,” Calvette said.

“There’s no reason why this community shouldn’t have the same quality food that the people coming to our dinners have,” Houck said.

For the foodies who follow UGK’s high-end, $150-per-plate dinners, those are ramping back up again. In August, UGK held a sold-out dinner with Bowles and, in October, another sold-out meal from chef Jason Bullard.

UGK has also launched a wine-tasting program to highlight women in wine, Black wine makers and other underrepresented players in the industry. UGK has been hosting special dinners, like at Fort Monroe in Hampton, to help raise funds for the African Landing Memorial Project and explore the history of the area. In Manchester, UGK opened a public-facing shop at 205 Hull St. that sells curated wines, food items and wares. A portion of all sales go to support UGK Community First.

Sparks said that as much as UGK lost during COVID — which was hundreds of thousands of dollars in planned dinners and lost revenue — he said, “I think that we gained so much more because of the work we did during COVID. I think we’re coming back with a stronger, more robust Underground Kitchen.”

“Kate and I always wanted to do something like this, but we were never able to slow down enough to do it,” Sparks added. “We had to ramp up really fast. Our experience in experiential pop-ups put us in a good position to get everybody gathered and make things happen really fast. COVID made us better people and a lot more conscious. We wake up differently every morning. We know that we’re feeding hundreds of people and teaching them how to eat better, to extend their lives.”