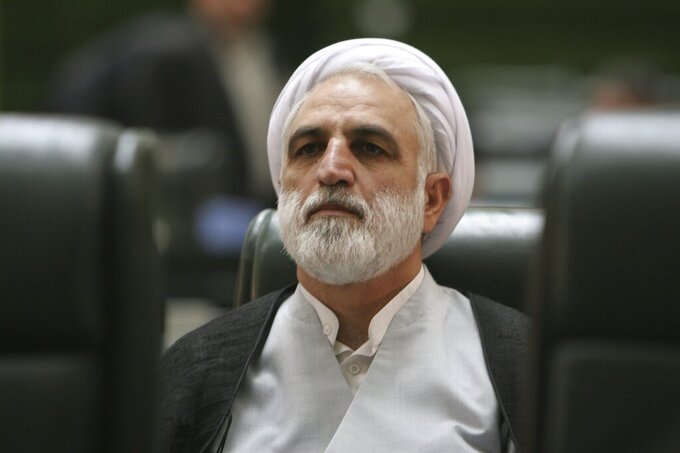 The new chief, Gholamhossein Mohseni Ejehi, 64, takes the reins from Ebrahim Raisi, who will ascend to the country's highest civilian position after his election victory earlier this month.

Ayatollah Ali Khamenei, who has the final say on all state matters in Iran, announced Ejehi's appointment, urging him to advocate for justice and fight corruption. In a decree, he praised Ejehi's “valuable experience, shining records and legal competence.”

Ejehi takes over a judiciary widely criticized by international rights groups for being one of the world’s top executioners, as well as conducting closed-door trials of dual nationals and individuals with Western ties. Raisi, the previous judiciary chief and a protege of Khamenei, was sanctioned by the United States in part over his involvement in the mass execution of thousands of political prisoners in 1988, as well as over his tenure at the judiciary.

Thursday's announcement was widely expected as Ejehi, considered close to Khamenei, had served as deputy judiciary chief after a long history in the branch, including as prosecutor general. In that post, from 2009-2014, he pushed to further limit access to the internet and popular social media apps, sparking worries among his opponents over the increase of social oppression.

From 2005-2009, during the first term of hard-line populist former President Mahmoud Ahmadinejad, Ejehi served as intelligence minister, following decades of deep involvement in the services dating back to his role as head of the ministry's recruiting office in the 1980s.

The conservative cleric landed on the U.S. Treasury Department and European Unions sanctions lists over allegations of severe human rights abuses linked to Ahmadinejad's disputed reelection in 2009. That vote, considered rigged by the reformist opposition, sparked massive “Green Movement” protests and a sweeping crackdown in which thousands of people were detained and dozens were killed.

Ejehi's relationship to Ahmadinejad became strained in 2009, when as intelligence minister he openly opposed the administration's tactic of broadcasting televised confessions from government opponents arrested in the post-election turmoil. In 2009, Ahmadinejad dismissed Ejehi from his post.

Even before the 2009 crackdown, Ejehi was associated with moves to jail reformist politicians. In 1998, he became known as the ultraconservative judge who shocked Tehran, the capital, with a harsh verdict against its reformist mayor. He initially sentenced Gholamhossein Karbaschi to five years in prison, 60 lashes and a hefty fine.

Ejehi also has come under heavy criticism over his role as a prosecutor in the Special Court of Clerics in the 1990s. His opponents accuse him of involvement in a string of killings of activists, dissidents and intellectuals that began in 1998.

Many moderates saw the slayings as an assault by hard-liners against the country’s reform movement. The Intelligence Ministry admitted in early 1999 that rogue agents were behind a limited number of killings, and the intelligence minister resigned. Dissidents claim that more than 80 opposition activists were killed by the security services in the 1990s.