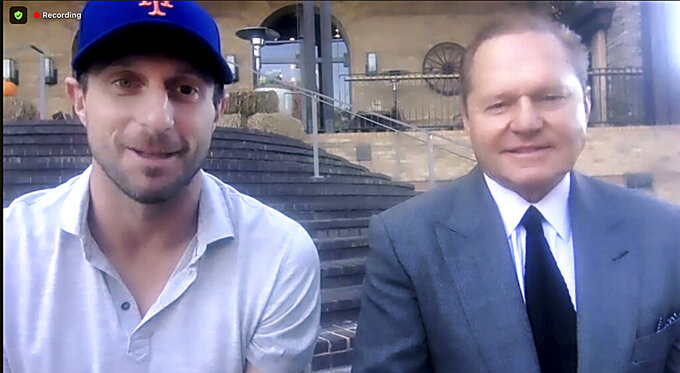 Scherzer said he was convinced during a video call with Cohen last month that the second-year owner was going to do whatever it took to build a winner in Flushing.

“You don't hear that from owners too much these days,” Scherzer said Wednesday. “When you hear an owner wants to do what it takes to win, obviously that piqued my interest.”

Of course, Cohen put his wallet behind his words.

The 37-year-old Scherzer will earn $43.33 million per year, 20% higher than the previous mark, the $36 million Yankees pitcher Gerrit Cole is averaging in his $324 million, nine-year contract signed prior to the 2020 season. Scherzer has the right to opt out after the 2023 season and become a free agent again.

The eight-time All-Star was 15-4 with a 2.46 ERA last season with the Washington Nationals and Los Angeles Dodgers, who acquired him on July 30. He didn't lose a game after May 30 and was as dominant as ever in his first nine starts with LA, going 7-0 with an 0.78 ERA.

The right-hander ran out of steam following heavy usage in the postseason, though. He was unable to start Game 6 of the NL Championship Series against Atlanta as planned due to arm fatigue. The Dodgers lost that game to end the series.

Scherzer said he took about two weeks off before resuming throwing. He's back on his normal offsesaon program, and he said the arm has turned a corner and felt better over the past two weeks.

“I needed to see where my arm was at, make sure there wasn't any damage, and there wasn't," he said. "I just needed time. I overcooked my arm, I worked past my work capacity and what it was built for.

This deal will raise his career earnings to at least $370 million.

“Max is one of the best pitchers of this or any generation,” Cohen said. “It’s a great day for the New York Mets. It’s an even better day for our fans.”

Cohen said new general manager Billy Eppler and the team’s analytics department calculated Scherzer’s value in the “vicinity” of where his contract ended up.

“I might have added a little more for brand building, but that’s how I got to the number,” he said.

Scherzer, who has thrown two no-hitters, lives in West Palm Beach, Florida, about an hour’s drive from the Mets spring training complex in Port St. Lucie. With his young daughters starting school, that proximity played in New York's favor.

Scherzer won his first Cy Young in 2013 with Detroit, then consecutive best-pitcher awards in 2016 and '17 with Washington. He finished third in this year's NL balloting behind Milwaukee's Corbin Burnes and Philadelphia's Zack Wheeler.

DeGrom won the Cy Young Award in 2018 and '19, and Scherzer will be the seventh multi-time Cy Young winner to pitch for the Mets — also Tom Glavine, Pedro Martinez, Bret Saberhagen, Johan Santana and Tom Seaver. That's two more than any other franchise, according to the Elias Sports Bureau.

Scherzer and deGrom will be the seventh pair of teammates to pitch together after winning multiple Cy Youngs. Scherzer did it with Clayton Kershaw last season, and the Mets had the previous two pairings with Martinez-Santana in 2008 and Martinez-Glavine from 2005-07.

“I've been fortunate throughout my whole career to have great starting pitchers beside me,” Scherzer said. “I know how powerful that can be, to have guys to feed off of and watch great pitchers.”

DeGrom didn't pitch after July 7 this year because of right forearm tightness, and Scherzer said he called deGrom to check on his status and inquire about the New York market before signing. They'll top a rotation that also includes Carlos Carrasco, Taijuan Walker and Tylor Megill.

They also announced a $20 million, two-year agreement with infielder Eduardo Escobar on Wednesday that includes a club option for 2024. The 32-year-old switch-hitter from Venezuela was a first-time All-Star in 2021, hitting .253 with 28 homers and 90 RBIs for the Arizona Diamondbacks and Milwaukee Brewers. He'll receive $10 million in 2022, $9.5 million in 2023 and his club option is for $9 million with a $500,000 buyout.

Marte, Canha and Escobar all agreed to their deals last Friday.

“When I saw those names, it was like, ‘OK, we're cooking a little bit now,'” Canha said.

The Mets had baseball’s third-highest payroll on Aug. 31 at $196 million, trailing the Dodgers ($261 million) and Yankees ($204 million), They could emerge as the top spender following their first full offseason under Cohen, who bought the team in November 2020 from the Wilpon and Katz families in a deal that valued the Mets at a baseball-record $2.42 billion.

As baseball heads to a likely lockout when the collective bargaining agreement expires Wednesday night, Scherzer is a member of the union’s eight-player executive subcommittee.

His agreement, like Cole’s, was negotiated by agent Scott Boras.