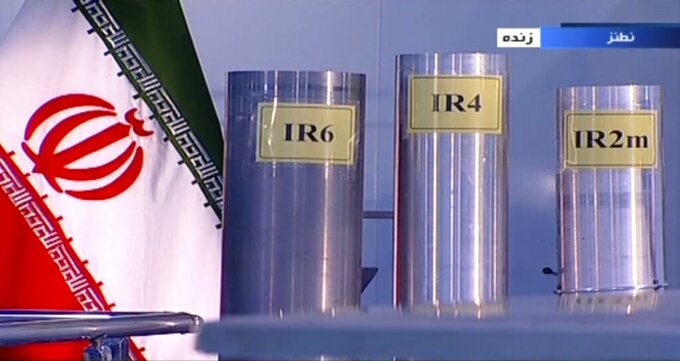 Uncredited, ASSOCIATED PRESS
FILE - In this June 6, 2018 frame grab from the Islamic Republic Iran Broadcasting, IRIB, state-run TV, three versions of domestically-built centrifuges are shown in a live TV program from Natanz, an Iranian uranium enrichment plant, in Iran. Iran has not made a decision yet about whether to extend an agreement with the U.N. atomic watchdog over access to surveillance footage at its nuclear sites, the country’s foreign ministry said Monday, June 28, 2021. (IRIB via AP, File)

TEHRAN, Iran (AP) — Iran has not made a decision yet about whether to extend an agreement with the U.N. atomic watchdog over access to surveillance footage at its nuclear sites, the country’s foreign ministry said Monday.

“No decision, either negative or positive has been made,” Khatibzadeh told reporters. “Neither the continuation of the deal nor the erasure (of data). We are in the previous position for the time being.”

Iran began limiting the access of U.N. atomic watchdog inspectors to its nuclear sites earlier this year, part of a pressure campaign on the West over its tattered 2015 nuclear deal with world powers.

Tehran was trying to push European powers to provide relief from oil and banking sanctions imposed three years ago when then-President Donald Trump withdrew America from the landmark accord. As part of that effort, Iran abandoned the accord's enrichment limits and is now enriching uranium to 60% purity, its highest ever levels, although still short of weapons grade 90%.

In order to limit diplomatic damage amid ongoing negotiations in Vienna to resurrect the nuclear deal, Iran and the International Atomic Energy Agency reached a last-minute February agreement over Tehran’s newly imposed limits on inspections. Iran promised to save the video data for later access — but only for three months, after which authorities threatened to delete the tapes.

The IAEA did not immediately respond to request for comment on Monday.

The move to erase the surveillance footage would steeply escalate tensions, complicating diplomatic efforts to find a path for America to lift sanctions and Iran to reimpose curbs on its nuclear program.

Nuclear deal negotiations have gathered urgency amid the presidential election victory of Iran’s hard-line judiciary chief, Ebrahim Raisi. Although known for his hostility to the West, Raisi has committed to securing sanctions relief through a return to the nuclear deal.

Khatibzadeh repeated that the arrival of a new administration would not affect negotiations in Vienna, since final authority rests with Iran's Supreme Leader Ayatollah Ali Khamenei.

“Basically, it does not matter under which administration the agreement happens,” he said.