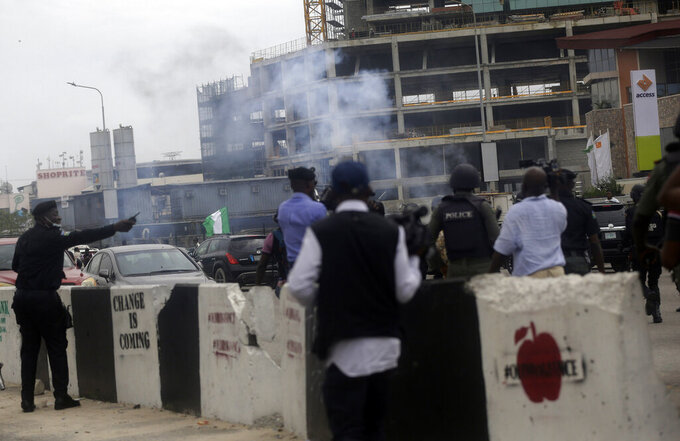 Sunday Alamba, ASSOCIATED PRESS
Policemen disperse protesters with tear gas following a demonstration at Lekki Toll plaza in Lagos Nigeria Wednesday, Oct. 20, 2021. Nigerian police officers fired tear gas at protesters in Lagos, the country's largest city, as they tried to disperse hundreds of people demonstrating against police brutality on Wednesday. One year ago, thousands marched in Nigeria for the #EndSARS movement to protest the activities of the now-disbanded Special Anti-Robbery Squad, a unit accused of police brutality. (AP Photo/Sunday Alamba)

One year ago, thousands marched in Nigeria for the #EndSARS movement to protest the activities of the now-disbanded Special Anti-Robbery Squad, a unit accused of police brutality.

The police on Wednesday fired tear gas at the Lekki tollgate in Lagos, a key site of those protests.

While people ran away, one officer shot at a protester in a bid to arrest him, according to Lawrence Akinkpelumi, who was at the protests.

There are widespread accusations of police brutality in Nigeria and police often clamp down on Nigerians demonstrating against police. In the days leading up to Wednesday’s demonstration, police warned protesters against any public gatherings, threatening to arrest anyone who disobeyed the directive.

Protesters marched through the Lekki tollgate Wednesday, chanting and singing songs calling on authorities to ensure justice for those they say were arrested and killed by security forces last year during the #EndSARS protests.

Four protesters were initially arrested in Lagos just as demonstrators started to arrive at the Lekki tollgate to mark the anniversary. More were arrested and put into police vans as police shot teargas into the air.

Shuaibu Yakubu, 23, said the tear gas also got into his eyes.

“They started shooting tear gas at us and chasing people who came here to remember those killed in October 2020. All my eyes are full of teargas,” he said.