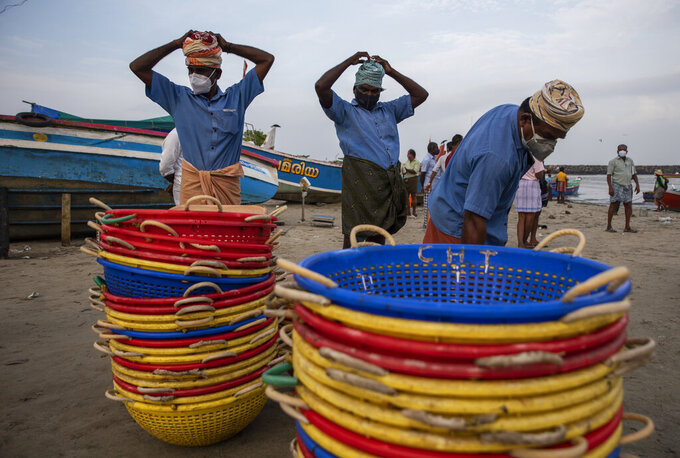 MELBOURNE, Australia — Hundreds of demonstrators have marched in the streets of Australia’s second-largest city to protest against mandatory coronavirus vaccine rules in the construction industry.,

The protest Tuesday in Melbourne was aimed at a Victoria state government mandate requiring all construction workers to get vaccinated.

The march came a day after riot police were called in to disperse about 500 protesters who smashed the door at the offices of the Construction, Forestry, Maritime, Mining and Energy Union, which represents construction workers.

On Monday night, the state government announced that the construction industry would be shut down from Tuesday for two weeks in metropolitan Melbourne and some regional areas.

Officials say all worksites will need to demonstrate compliance with health directions prior to reopening, including that staff have had at least one dose of a vaccine before they return to work Oct. 5.

HANOI, Vietnam — Vietnamese authorities are relaxing some pandemic restrictions in Hanoi starting Tuesday after two months of lockdown to contain a surge in coronavirus cases.

But schools will remain closed, public events and gatherings of more than 10 people are still banned and public transport including train and air travel stay suspended. Hanoi will also maintain 22 checkpoints on the outer ring roads to control travel into the city.

A dozen of high risk neighborhoods in Hanoi where recent virus cases were found will continue to be in lockdown.

Since July, Vietnam has enabled a strict lockdown order for more than half of the country in an effort to contain the spread of the delta variant.

CHARLESTON, W.Va. — Active coronavirus cases in West Virginia have fallen dramatically in recent days, bringing a hope that the latest surge is at or past its peak, though officials warn that deaths and hospitalizations will continue to swell before dropping.

The number of current virus cases statewide fell to 21,490 on Monday, down 28% from Thursday’s pandemic high of nearly 30,000. However, the head of the state’s pandemic task force says deaths and hospitalizations for COVID-19 are expected to continue increasing for as many as six more weeks.

The number of virus-related deaths so far this month is 340, which is more than those in June, July and August combined. Hospitalized for COVID-19 hit a record 957 on Sunday.

The suit argues that requiring masks in school regardless of vaccination status is causing emotional harm and psychological distress to students who must cover their faces six to eight hours a day. It contends the policy is unconstitutional because it violates parental rights and due process requirements.

Aides to Sisolak and Ford have declined to comment on the latest court filing.

OLYMPIA, Wash. — Washington state’s governor is asking the federal government to provide military personnel to help in staffing hospitals and long-term care facilities in response to the COVID-19 pandemic.

In a letter made public Monday, Gov. Jay Inslee says that “in Washington State, our hospitals are currently at or beyond capacity, and we need additional assistance at this time.”

The letter was sent Friday to Jeffrey Zients, the White House pandemic coordinator.

Inslee notes the state Department of Health has requested 1,200 clinical and non-clinical staff and says he is requesting deployment of military medical personnel “to assist with the current hospital crisis.”

WASHINGTON — Aiming to pressure wealthy countries to boost their investment in global COVID-19 vaccine sharing, the Open Society Foundations is devoting a new $30.5 million pledge to address inequity in the distribution of the live saving shots.

The funds will support vaccine access and distribution efforts in lower income countries and comes ahead of a virtual COVID-19 vaccination summit on Wednesday to be convened by President Joe Biden on the margins of the United Nations General Assembly.

Mark Malloch-Brown, president of the Open Society Foundations, highlighted that well-off nations have fallen behind their global vaccine sharing pledges and are hoarding doses that could be administered immediately in poorer countries.

“Wealthy countries need to stop stockpiling doses, forcing the rest of the world to rely on handouts. Nations with means must do better,’” he said.

The new pledge brings the George Soros-backed nonprofit’s spending on COVID-19 to more than $230 million.

OMAHA, Neb. — Gov. Pete Ricketts is resurrecting a version of Nebraska’s daily virus reporting dashboard website because the number of COVID-19 hospitalizations has continued to rise through the summer.

The state eliminated its daily virus dashboard in June at the same time the last of Ricketts’ emergency orders related to the pandemic were allowed to expire and cases were low. At the end of June, the state was reporting 253 virus cases per week and 28 people were hospitalized statewide.

The state’s decision to stop providing daily COVID-19 updates was widely criticized by health experts who use the data to track the virus’ spread. A group of 11 state senators wrote a letter to Ricketts last month urging him to reinstate the daily virus dashboard.

The state launched a weekly website to report some virus numbers in July but it didn’t offer as much detail and information as the old daily site. As of the state’s most recent update last Wednesday, 415 people were hospitalized with the virus.

WOONSOCKET, RHODE ISLAND — CVS Health aims to fill 25,000 openings at its drugstores nationally, as the chain gears up to deliver more COVID-19 vaccines as well as preventive shots for the flu this fall and winter.

The company said Monday that it is looking for full- and part-time pharmacists, pharmacy technicians and nurses for its stores. It also wants to fill temporary positions.

The Woonsocket, Rhode Island, company runs around 9,900 retail locations, including some pharmacies inside Target stores. It employs about 300,000 people.

CVS Health said the hiring campaign will help its stores deliver COVID-19 booster shots and continue to offer shots to those who have not been vaccinated. The company’s stores have administered more than 34 million COVID-19 vaccines so far.

President Joe Biden announced plans last month to deliver booster shots of the coronavirus vaccine to all Americans. But a key government advisory panel recommended last week that extra doses should be used only for those who are age 65 or older or run a high risk of severe disease.

The Food and Drug Administration and the Centers for Disease Control and Prevention are expected to weigh in soon on the matter.

WASHINGTON — In a major escalation of the District of Columbia’s COVID-19 virus protocols, Washington DC will require all adults who regularly enter schools or child care facilities to be vaccinated by Nov. 1.

The new rule, announced Monday by Mayor Muriel Bowser, rescinds the previous option that school teachers and staff could remain unvaccinated provided they submit to regular testing. Bowser said in a statement that the new requirement “will add another critical layer to the robust measures we have implemented to reopen our schools and keep our child care centers safe.”

The mayoral order will also require that student athletes age 12 and up must be fully vaccinated in order to participate in school-based athletics.

The abrupt change drew protests from the Washington Teachers’ Union, which said it had not been consulted in advance.

WTU President Jacqueline Pogue Lyons said in a statement that the union “supports the principle of a vaccination mandate,” but seeks a negotiated agreement “for those with legitimate religious or medical exemptions” and an agreement on how to handle staffers who don’t fall under these exemptions but wish to remain unvaccinated.

Pogue Lyons said the union wants to “get clarity and work this out through bargaining immediately.”

The changes come after the first full week of the school year in which nearly 900 classrooms, including those in charter schools, were fully or partially closed in the city’s 1,876 schools because of reports positive COVID-19 cases. One school entirely closed for 10 days after a cluster of cases.

Unlike other school districts, New York City is not offering any remote instruction this school year, despite concerns about the highly contagious delta variant’s ability to spread. De Blasio has said children need to be back in school for their mental and physical health and social development.

The new rules take effect on Sept. 27. That day is also the deadline for the city’s public school teachers and staff to get at least their first shot of the COVID-19 vaccine under a city-wide schools mandate.

Greece has already started offering booster vaccinations to people who are immunocompromised.

On Monday, health officials said the new eligible categories will be able to get an additional shot from six months after they complete their initial full vaccination.

The country has so far vaccinated 65.6% of the eligible population.

LONDON — Britain welcomed the U.S. announcement that it is lifting quarantine requirements for vaccinated international travelers, though the news appeared to have taken the U.K. government by surprise.

Prime Minister Boris Johnson tweeted that he was “delighted” by the news. He said: “It’s a fantastic boost for business and trade, and great that family and friends on both sides of the pond can be reunited once again.”

Britain scrapped quarantine for fully vaccinated travelers from the U.S. and the European Union in early August, and has been pushing for Washington to ease its rules. But Johnson said Sunday that he did not expect the change to come this week.

Airlines hailed the U.S. decision as a lifeline for the struggling industry. Tim Alderslade, chief executive of industry body Airlines U.K. said it was “a major breakthrough.”

Shai Weiss, chief executive of Virgin Atlantic, said it was “a major milestone to the reopening of travel at scale, allowing consumers and businesses to book travel to the US with confidence.”

“The U.K. will now be able to strengthen ties with our most important economic partner, the US, boosting trade and tourism as well as reuniting friends, families and business colleagues,” Weiss said.