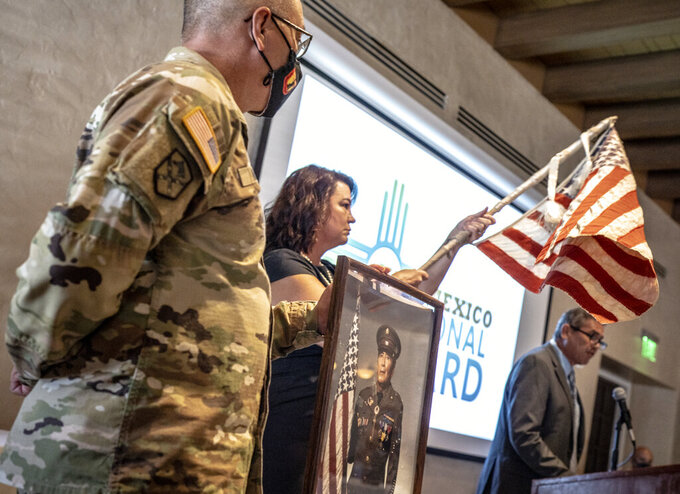 ROBERTO E. ROSALES, ASSOCIATED PRESS
Retired Col. Brian Baca, right, tells New Mexico National Guard soldiers and airmen the incredible story of an American flag made from scraps of material in a Japanese prisoner of war camp during World War II, Wednesday, Sept. 8, 2021 in Albuquerque, N.M.. The flag was scheduled to be given to representatives of the Smithsonian Institution on Wednesday. At left is Maj. Gen. Kenneth Nava, Adjutant General of New Mexico, and Baca's sister Karen Nielsen, who holds the flag made by late Albuquerque resident Joseph O. "Jose" Quintero. (Roberto E. Rosales/The Albuquerque Journal via AP) 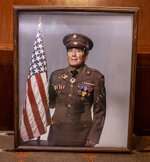 ALBUQUERQUE, N.M. (AP) — Its beginnings were humble, but proud and brave too.

An American flag, assembled secretively and at risk in a Japanese prisoner-of-war camp, was fashioned out of pieces of red blanket, white bedsheets and blue denim dungarees.

For 25 years, it was stored in a closet at the Albuquerque home of Joseph O. “Jose” Quintero, the American soldier responsible for its creation.

Then for nearly 30 years it traveled with Army Lt. Gen. Edward Baca to every U.S. state and territory and seven continents, as Baca told the story of the flag and the brave men who battled the Japanese in the Philippines before falling to the enemy during World War II.

Now this flag, its pieces once wrapped in canvas and buried in dirt to keep it concealed from Japanese guards, is on the way to the Smithsonian National Museum of American History in Washington, the Albuquerque Journal reports.

“One of the first places my father gave his speech about the flag was at the Smithsonian,” said retired Col. Brian Baca, son of Lt. Gen. Baca, who died in September 2020.

“He said then he would give the flag to the Smithsonian, and my father’s word was his bond.”

“We couldn’t let the flag leave New Mexico without doing something like this,” Brian Baca said. “It was awesome to be telling this story for the last time in front of these soldiers.”

The flag was scheduled to be handed off to Smithsonian representatives in Albuquerque in September. There are plans to make a replica of the flag, which would be kept in New Mexico.

Quintero died in Albuquerque at age 82 in November 2000. According to his obituary, he was born in Fort Worth, the oldest of nine children. He moved to Albuquerque in 1946 and worked as a research technician with the federal government.

During World War II, he served as a corporal with the U.S. Army’s 60th Coastal Artillery Regiment on Corregidor. Like the many New Mexicans serving in the 200th and 515th Coastal Artillery regiments in Bataan and Corregidor, the men in the 60th were overcome by the Japanese in the spring of 1942.

“They held back the Japanese for months,” Brian Baca said. “They were finally defeated by disease, hunger and lack of ammunition.”

Many of the defenders of Bataan and Corregidor who survived the fighting, the forced marches after their defeat and initial imprisonment in the Philippines, were put on ships and transported, in hellish conditions, to prisoner-of-war and labor camps in Japan. Quintero was among those sent to Japan.

It took Quintero more than a year to make the flag. His fellow prisoners helped.

A Canadian soldier, a double amputee who had access to a sewing machine because he was tasked with mending the uniforms of Japanese soldiers, put the flag together.

“Jose wanted to make the flag as a tribute to those who were dying around him,” Brian Baca said. “But if the Japanese had found it, it could have been death for not only him, but also for his comrades. Jose did not even know how many states were in the union or the significance of the 13 stripes. He had to ask an officer.”

In the early ’90s, Gen. Baca was speaking to a group of Bataan and Corregidor survivors at an Albuquerque hotel, when Jose Quintero approached him with his flag, told Baca its story and entrusted the general with it. Baca promised to tell the story of the flag’s incredible origin and the men it honored wherever he went.

“He told the story in Russia,” Brian Baca said. “One of the last places he visited was the Philippines.”

Nielsen said her father told the story to all his children and grandchildren. She said it’s difficult to give the flag up.

“It feels very sad to me,” she said. “It’s like letting part of my father go. It’s very emotional.”

But her brother believes the flag needs to go to the Smithsonian, so its story can live on.

“Memories are what we have now,” Brian said.