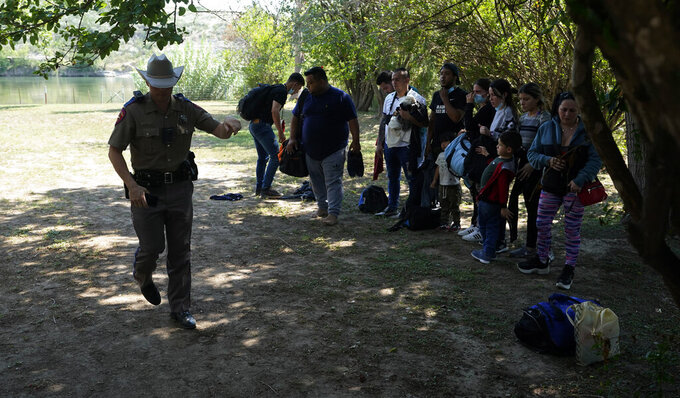 Eric Gay, ASSOCIATED PRESS
FILE - In this June 16, 2021 file photo, Texas Department of Public Safety officers work with a group of migrants who crossed the border and turned themselves in Del Rio, Texas. Republican Texas Gov. Greg Abbott's newest immigration crackdown, allowing state troopers to pull over vehicles suspected of carrying migrants on the basis that they could increase the spread of COVID-19 in the U.S., brought swift backlash from the Justice Department as criticism of the order mounted. (AP Photo/Eric Gay, File)

AUSTIN, Texas (AP) — A new order by Texas Gov. Greg Abbott that allows state troopers to stop and turnaround vehicles carrying migrants on the basis that they could increase the spread of COVID-19 drew swift backlash and a threat of a lawsuit from the Justice Department on Thursday.

Attorney General Merrick Garland urged Abbott, a Republican, to immediately walk back the directive a day after it was issued by the two-term governor, who is up for reelection in 2022 and for months has sought to claim former President Donald Trump's hardline mantle on immigration.

The letter from Garland is among the most forceful pushback yet from the Biden administration over the actions taken by Abbott along the U.S.-Mexico border, which have also included jailing migrants on state crimes and building new fencing. Civil rights groups and immigration advocates have also slammed Abbott's latest move to curb border crossings, saying it could invite racial profiling and restrict the ability of shelters to take in newly arriving families.

“The order is both dangerous and unlawful," Garland wrote.

Garland said Texas had “no authority to interfere" with the federal government's broad powers of immigration and raised the potential of a lawsuit if the order was not lifted.

In releasing the directive Wednesday, Abbott said “we must do more to protect Texans from this virus and reduce the burden on our communities." The order allows the Texas Department of Public Safety to “stop any vehicle upon reasonable suspicion" that it was providing ground transportation to a group of migrants. Troopers could then reroute vehicles back to its point of origin or impound it.

Abbott shrugged off Garland's letter in a statement that blamed the Biden administration for high levels of migration along the southern border.

“The Biden Administration is jeopardizing the health and safety of Texans on a daily basis by refusing to follow the law," he said.

The directive is not the first time during the pandemic that Abbott has put focus on migrants and the virus’ spread at a time of heightened worry over COVID-19. He raised similar worries over migrants in March — without providing any evidence that they were causing increased COVID-19 caseloads — which came as he faced criticism from public health officials for lifting a statewide mask mandate.

Abbott is now again facing calls to impose new coronavirus safeguards as the spread of the COVID-19 delta variant is raising infections. But he says he will not order new lockdowns or reimpose mask mandates.

“Blaming the current coronavirus surge on immigrants in his executive order, is a flagrant attempt to absolve his ineffective leadership that ultimately led to the unnecessary loss of life of our fellow Texans," Democratic state Rep. Rafael Anchia said.

Large numbers of migrants have been showing up at the U.S. border with Mexico, with many turning themselves over to U.S. Border Patrol agents in seeking legal asylum status. U.S. officials reported this month that they had encountered 55,805 members of families with children in June, up 25% from the previous month. That figure still remains far below the high of 88,587 in May 2019.