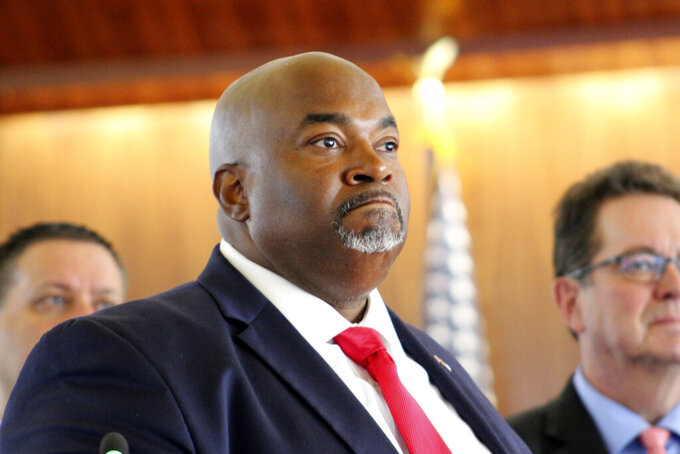 “There’s no reason anybody anywhere in America should be telling any child about transgenderism, homosexuality, any of that filth,” Robinson said at Asbury Baptist Church in Seagrove.

The state's highest Republican executive officeholder, already the focus of criticism for trying to influence how racism can be discussed in public schools, is getting more pushback since Right Wing Watch, a project of the progressive advocacy group People For the American Way, posted the video on social media last week.

The Human Rights Campaign, Equality North Carolina, prominent Democratic lawmakers and the White House have condemned the remarks, with some demanding the lieutenant governor's resignation.

“We are calling on Lieutenant Governor Mark Robinson to resign for his disgraceful, hateful statements directed at LGBTQ+ people. If Lt. Governor Robinson still doesn’t understand how anti-LGBTQ+ rhetoric is received in North Carolina, he should ask former Governor Pat McCrory," Human Rights Campaign Interim President Joni Madison said in a statement, referring to McCrory's 2016 gubernatorial election loss months after signing a bill compelling North Carolinians to use the restroom of the gender assigned at their birth.

“Of course he should step down,” Jackson wrote. “This isn't hard, folks. Basic decency is all we should need to agree on to see that.”

Democratic Gov. Roy Cooper's office has called Robinson's June remarks “abhorrent," but it did not respond when asked if the governor himself has anything to say on the matter, or if Cooper believes the independently elected lieutenant governor should resign. Among many largely bureaucratic activities, Robinson could preside as North Carolina's top officeholder if Cooper chose to travel outside the state.

In a video posted on his Facebook page Saturday night, Robinson narrated over images depicting gay sex that were taken from “Gender Queer.” Robinson claimed the illustrated book “is currently in North Carolina schools,” though it wasn't mentioned a single time in the 831-page report he released in August highlighting cases of alleged “indoctrination.” That report was designed to support a Republican bill that would have limited teaching about race if not for Cooper's veto.

“The media and those on the left have tried to change the focus from education to the LGBT community, specifically, that I hate them,” Robinson said in the video. “Let me be clear: I will fight for and protect the rights of all citizens, including those in the LGBTQ community to express themselves however they want. That is their right as Americans, and I don't think the government has any role in telling them otherwise. However, the idea that our children should be taught about concepts of transgenderism and be exposed to sexually explicit materials in the classrooms is abhorrent."

In an email, John Waugh, a spokesperson for Robinson, said the “Gender Queer” book “came to our office’s attention from Cedar Ridge High School in Hillsborough, North Carolina (Orange County). However, we have found this book in other counties across the state as well, including Wake and Buncombe counties.”

Robinson's critics say these remarks are only the latest examples of the discriminatory views he has espoused over the years.

After the 2016 shooting at Pulse, a gay nightclub in Orlando, Florida, Robinson wrote on Facebook, “I pray for the souls of all those killed, healing for all those wounded, and comfort for the family members of the terrorist shooting in Orlando. However, homosexuality is STILL an abominable sin and I WILL NOT join in ‘celebrating gay pride’ nor will I fly their sacrilegious flag on my page.”

In December 2016, Robinson criticized a National Geographic magazine cover titled “Gender Revolution" that displayed a 9-year-old transgender child. Robinson wrote, “The sick, deranged, sexual degenerates who promote this type of demonic behavior are the ones who will take the next step in our continuing moral decline toward total depravity. Free love, then homosexuality.”

In 2017, Robinson wrote, “You CAN NOT love God and support the homosexual agenda.”

Two years later, he chastised gender reassignment surgeries and accused parents of having “mentally raped” their transgender children. He also wrote in 2019 that “the same people who claim the new Rambo movie is (too) ‘manly’ are the same people who think it’s okay for the homecoming queen to BE a man.”

“This is not the first time Robinson has shared his discriminatory views, but it should be the last time he gets away with it as an elected leader,” Madison wrote. “North Carolinians deserve better than these dehumanizing comments.”