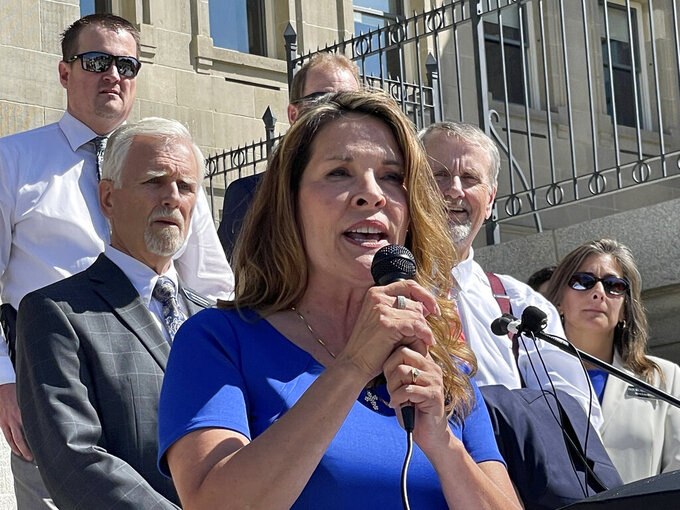 Keith Ridler, ASSOCIATED PRESS
FILE - In this Sept. 15, 2021 file photo Republican Lt. Gov. Janice McGeachin addresses a rally on the Statehouse steps in Boise, Idaho. Idaho Gov. Brad Little said he will rescind an executive order involving COVID-19 vaccines by McGeachin, and the commanding general of the Idaho National Guard also on Tuesday, Oct. 5 told McGeachin she can’t activate troops to send to the U.S.-Mexico border. Little and Major General Michael J. Garshak made the decisions as McGeachin attempted to exercise her authority as acting governor with Little out of the state. (AP Photo/Keith Ridler,File)

Republican Gov. Brad Little issued the order while still in Texas, a move that challenges the state’s longstanding practice of making the lieutenant governor acting governor when the governor is out of state.

Lt. Gov. Janice McGeachin, a far-right Republican who is running to take Little’s job, issued her order Tuesday and also sought to activate the Idaho National Guard and send soldiers to the U.S.-Mexico border.

Little is in Texas meeting with nine other Republican governors over concerns on how President Joe Biden is handling border issues. In Idaho, the governor and lieutenant governor don’t run on the same ticket. Little was expected back late Wednesday.

Little’s executive order appears to lay the groundwork for a court challenge to determine who is in charge when governor leaves the state.

Little's order states that he did not authorize McGeachin to act, and it cites Idaho law.

“Nor does my temporary presence in Texas on official business impair my ability to represent the people of Idaho thus necessitating action by another executive to ensure the continuity of state government,” the executive order states.

The order also notes that Little had previously through an executive order banned state entities from requiring vaccine passports.

Little's order also states that McGeachin's order prohibiting COVID-19 testing would harm the state's ability to curb the spread of the disease.

Idaho is currently under crisis standards of care because of unvaccinated COVID-19 patients filling hospitals. Nearly 3,000 people have died from the disease in the state.

Little's office declined to comment about his executive order.

McGeachin's office didn't return a call from The Associated Press.

The attorney general's office, which would appear to have to defend the state's top executive in the dispute, declined to comment.