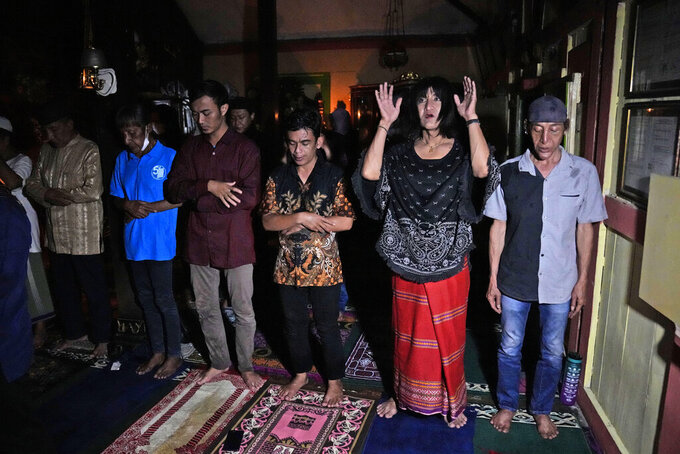 Dita Alangkara, ASSOCIATED PRESS
Trans women and activists perform an early evening prayer at Al-Fatah Islamic school in Yogyakarta, Indonesia, Sunday, Nov. 6, 2022. On the outskirts of the Indonesian city that's home to many universities, the small boarding school is on a mission that seems out of place in a nation with more Muslim citizens than any other. Its students are transgender women. (AP Photo/Dita Alangkara)

YOGYAKARTA, Indonesia (AP) — On the outskirts of Yogyakarta is a small boarding school with a mission that seems out of place in Indonesia, a nation with more Muslim citizens than any other. Its students are transgender women.

It is a rare oasis of LGBTQ acceptance across the far-flung Muslim world. Many Muslim nations criminalize gay sex — including World Cup host Qatar. LGBTQ people routinely are rejected by their families, denounced by Islamic authorities and hounded by security forces. Appeals for change from LGBTQ-friendly nations are routinely dismissed as unwarranted outside interference.

Yogyakarta’s Al-Fatah Islamic school was founded 14 years ago by Shinta Ratri, a trans woman who previously struggled with whether her gender transition was sinful. Eventually, she devoted herself to enabling other trans women to study Islam. The student body has grown from 20 to 60.

Among them is Y.S. Al Buchory, 55, who struggled for years with lack of acceptance, but now feels at home at the school and hopes tolerance spreads: “We must be able to respect each other, tolerate, not interfere with each other.”

In Aceh, two men were publicly caned last year after neighbors reported them for having sex. Earlier this year, Indonesian Vice President Ma’ruf Amin, a Muslim cleric, said in a speech that LGBTQ people were engaged in “deviant behavior” that should be outlawed.

That attitude was reinforced last week, when the United States canceled an Indonesia trip by a special envoy on LGBTQ rights after a key Islamic group objected.

“We cannot accept guests whose purpose of coming here is to damage and mess up the noble values of our nation’s religion and culture,” said Anwar Abbas, the Indonesian Ulema Council vice chairman.

Dédé Oetomo, founder of the LGBTQ-rights organization GAYa NUSANTARA, said acceptance of his community varies. He cited a few examples – such as a trans woman chosen as leader of a village council – yet said there is little hope of meaningful government support.

“We still cannot imagine if there would be a law for the protection against discrimination,” Oetomo said.

That’s the norm throughout the Muslim and Arab worlds, said Rasha Younes, a senior researcher with Human Rights Watch who investigates anti-LGBTQ abuses in the Middle East and North Africa.

In a few countries, LGBTQ-friendly cafes have surfaced, and activists have been able to offer social services and campaign for reforms, Younes said.

“But the results are as weak as ever,” Younes said, noting that anti-LGBTQ laws still stand and activists often face crackdowns: “LGBTQ people will continue to live on the margins unless the governments repeal these laws.”

In many cases, the religious underpinnings of anti-LGBTQ attitudes are coupled with resentment of outside pressure from nations that embrace inclusion. More than a dozen Muslim nations recently barred Disney’s animated film “Lightyear” from playing at cinemas due to inclusion of a lesbian couple's kiss. In Qatar, authorities have urged visiting World Cup fans to respect the culture.

In some countries, pushbacks have followed apparent advances. Over recent years, Lebanon's LGBTQ community was widely seen as the most vibrant in the Arab world. Yet many in the community have been reeling from a wave of hostility this year that included a ban on events described as aiming to promote “sexual perversion.”

In November, relieved activist groups reported the event ban had been suspended.

In Turkey, which is overwhelmingly Muslim, President Recep Tayyip Erdogan’s government has shown increasing intolerance toward any expression of LGBTQ rights. It’s a marked change for Erdogan, who, before coming to power in 2003, said mistreating gay people was inhumane and called for protections.

In Istanbul, a Pride march has been canceled since 2014. The government in contrast recently allowed an anti-LGBTQ rally to proceed.

The ruling party is expected to propose constitutional amendments that would protect family values from what Erdogan describes as “perverted currents.” Activists fear the amendments would curb LGBTQ rights and discourage same-sex relationships.

Among Arab nations, most explicitly outlaw gay sex, including Qatar. It has faced intense international criticism before and during the World Cup, including whether LGBTQ visitors would feel safe and welcome.

Other Arab countries, such as Egypt, prosecute LGBTQ people under charges of immorality or debauchery. The situation is similar in Iraq; Human Rights Watch says lack of an explicit ban on gay sex there has not protected LGBTQ people.

A transgender Iraqi woman who identifies as Kween B, told The Associated Press her life felt precarious: “You could get smashed any second.”

In her case, that has meant getting bullied and suppressing her feminine identity while coming of age. Now, at 33 and living in the Kurdish city of Sulaymaniyah, she believes she would be rejected, or even physically harmed, if she came out to her family. But she has increasingly pushed the boundaries, like donning a rainbow wristband in public.

Earlier this year, Human Rights Watch alleged that armed groups in Iraq abduct, rape, torture and kill LGBTQ people with impunity and that the police arrest and also carry out violence against them.

Iraqi officials deny any attacks by security forces on gay people; one commander said the violence was likely from their families.

Looking ahead, leading LGBTQ-rights advocates salute the courage of activists trying to operate publicly in certain countries. But they're not optimistic about major advances happening,

“In many countries, where civil society is not allowed, where there’s complete lack of rights and free association, activism cannot be viewed in the public realm,” Younes said. “People cannot protest or express support online for LGBTQ rights, so there’s total repression of LGBTQ rights.”

He’s skeptical the LGBTQ cause can rise to the forefront when repression in the region affects so many people. He sees the current widespread anti-government protests in Iran – where homosexual acts can be punished by death – as a possible model for change.

“The discourse should be about bodily autonomy — the right over your body and decisions over your sexual rights, not specific to men, women, gay, straight,” he said.