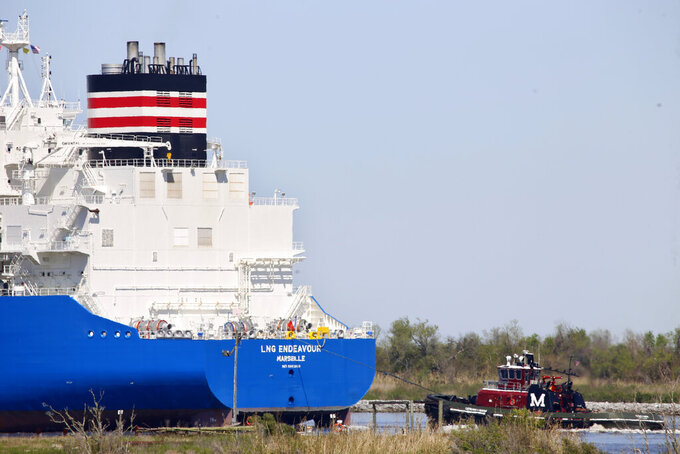 Martha Irvine, ASSOCIATED PRESS
A tugboat helps guide a French ship, known as the LNG Endeavor, through Calcasieu Lake near Hackberry, La., on Thursday, March 31, 2022. The ship was on its way to the Cameron LNG export facility to pick up liquified natural gas. Companies and investors have poured $63 billion into building U.S. LNG export terminals over the past decade and could spend more than $100 billion over the next 20 years, according to an analysis by Rystad Energy. (AP Photo/Martha Irvine)

LAKE CHARLES, Louisiana (AP) — The front lawn of Lydia Larce’s home is strewn with debris: remnants of cabinets and chunks of pink shower. She lives in a FEMA trailer out back, her home in shambles after hurricanes tore through Lake Charles.

Larce, like many in Southwest Louisiana, has what she calls “storm PTSD.” Tornado warnings trigger anxiety. She struggles to sleep.

"The fear and the unknown — it has me on an edge,” Larce said.

A string of devastating hurricanes tore through this region in recent years. Nationally, too, there have been more Category 4 and 5 hurricane landfalls in the past five years than in the previous 50 combined. Larce and her neighbors know they are on the front lines of climate change.

Her region is now the epicenter of a trend that she fears will make those disasters worse. Developers plan to build a series of liquefied natural gas export facilities nearby.

Greenhouse gases are raising global temperatures and fueling extreme weather, including storms like those that pummeled Larce’s hometown.

For awhile, it seemed as though an era of expanding fossil fuel facilities might be ending. Last year, President Joseph Biden announced his intention to fight climate change by sharply reducing emissions.

Yet since Biden became president, the U.S. has become the world’s largest exporter of liquefied natural gas (LNG) as demand for the fuel escalated. Russia’s invasion of Ukraine intensified the push, heightening demand for natural gas, especially for European countries reliant on Russian energy.

The natural gas industry promoted U.S.-produced LNG as a way to fill the gaps. American terminals are exporting gas at full capacity, so expansion of the terminals accelerated.

The new and proposed export terminals are clustered along the Gulf Coast, where some locals are supportive.

“It’s a significant boon to our economy, because it provides good, high-paying jobs,” said Eric Tarver, a member of the Calcasieu Parish School Board. “More than that, it’s a tremendous amount of tax revenue that just dwarfs what we’ve had from any other industry.”

But other locals say few of those coveted jobs go to long-time residents.

“I feel Southwest Louisiana has been made a sacrificial lamb,” said Roishetta Ozane, an organizer for Healthy Gulf.

A critic of the expansion of LNG facilities, Ozane warns neighbors that the emissions worsen global warming and violent storms.

“Now is the time to get people’s attention, to open their eyes that climate change is real,” Ozane said.

Nearby, Cindy Robertson refills a pantry box in her front yard to help feed homeless neighbors.

Her region has endured seven federally declared disasters in two years. With a succession of LNG terminals opening around her, she fears her region hasn't yet seen the worst.

“Instead of focusing on LNG... we need to take all that brainpower and all that money and put it into expanding our renewable resources,” Robertson said.

The use of wind and solar energy has grown as prices for such renewables have plunged. But so has the world’s thirst for natural gas. In February, the U.S. exported six times times the LNG it did five years earlier.

Investors poured $63 billion into building American LNG terminals over the past decade, and could spend $100 billion more over the next two decades, according to Rystad Energy.

That's despite warnings from the United Nations Intergovernmental Panel on Climate Change that emissions from existing fossil fuel infrastructure would cause global warming to exceed 1.5 degrees Celsius (2.7 Fahrenheit) — a level scientists say would bring dangerous consequences.

Of the eight terminals now exporting LNG, five are in Louisiana and Texas. At least 16 more are proposed, nearly all in those states.

The projects are backed by Exxon Mobil, Qatar Energy, Total Energies and other global energy giants.

“We’re delivering a cleaner, more environmentally friendly fuel,” said Charlie Riedl, executive director of the Center for LNG, the industry's lobbying group. “The U.S. can use that to help defuse some of the geopolitical issues around the world by delivering a reliable fuel source.”

Initially, Biden's administration didn't approve requests to expand the LNG industry. But after the war in Ukraine began, it allowed some facilities to upgrade, increasing how much they could produce, and encouraged the oil and gas industry to boost production.

Asked whether encouraging fossil fuel exports contradicts Biden's climate goals, Energy Secretary Jennifer Granholm told The Associated Press, “We have got to do both," adding the U.S. can help allies, reduce fuel cost and transition to cleaner energy.

At sunrise on the Gulf Coast, the dark sky cracks into shades of orange and gray. A bright orb on the horizon looks like the rising sun. It’s not. It’s a flare from Calcasieu Pass LNG, a new terminal which opened about a mile from John Allaire’s beachfront property.

A retired environmental engineer for an oil company, Allaire doesn't oppose oil and gas use. But he fears a proposed terminal which would cover about half the ponds here packed with mud minnows and spawning shrimp.

“I’m glad there’s still places like this left — I really don’t want to see it paved over,” Allaire said.

Together, the four LNG export terminals on the Gulf Coast emitted nearly 10 million metric tons of carbon dioxide equivalent in 2020 — comparable to all of Costa Rica, according to the Global Carbon Project.

The LNG exports are also tied to climate change because methane, the main ingredient of LNG, is a powerful greenhouse gas. And methane escapes in large quantities from leaky wells and pipelines.

Natural gas proponents say it's better for the climate than burning coal, because it releases fewer emissions when burned. But in most places globally, gas isn’t substituting for coal; it's adding to coal and other energy sources, said Rob Jackson, a professor at Stanford University.

According to the Energy Information Administration, natural gas use will drive an overall increase in greenhouse gas emissions in the U.S. from 2037 to 2050.