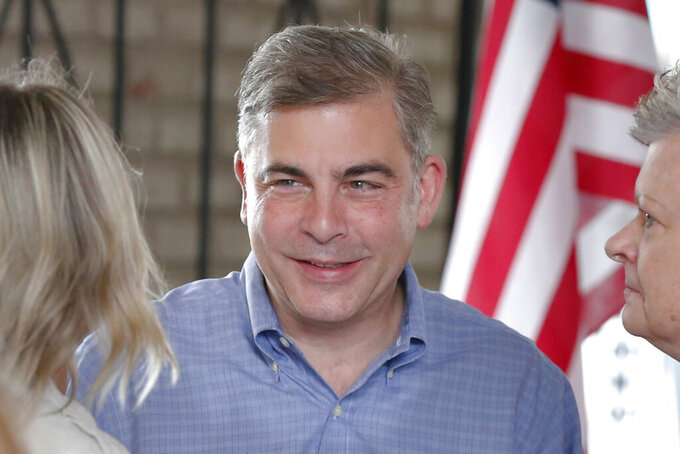 The seat opened up in May, when veteran Republican U.S. Rep. Steve Stivers retired to lead the Ohio Chamber of Commerce. A centrist and former campaign chair for House Republicans, Stivers had held the seat for a decade.

The gerrymandered district stretches across all or part of 12 Ohio counties, from tiny impoverished Vinton County in the Appalachian foothills to the Columbus suburb of Upper Arlington, one of the state's wealthiest communities.

Buoyed by the former president's endorsement, Carey won a crowded Republican primary in August in which Stivers endorsed someone else. That signaled Trump's continued sway in a state he twice won by more than 8 percentage points. Carey's longtime friend Corey Lewandowski, the Trump confidant and former top campaign aide, set up his introduction to the former president, Carey said.

However, Russo slightly outraised Carey for the fundraising period ending in mid-October, as national groups such as EMILY's List and the League of Conservation Voters saw promise in her run and donated. The public health policy consultant also is backed by 314 Action, which supports scientists in public office.

Carey, 50, of Columbus, has sought to leverage his lobbying experience in Columbus and Washington with voters, while emphasizing that he has never held elected office and would go to Washington as a “political outsider.” Among the Army veteran’s endorsements are the National Federation of Independent Business-Ohio and the Fraternal Order of Police.

Russo, 45, of Upper Arlington, has sought in her TV ads, many featuring her young daughter, to tie Carey to the legislation at the heart of a sweeping corruption scandal centered on former Republican Ohio House Speaker Larry Householder, House Bill 6 — a claim Carey has fought.

Carey has been vice president of government affairs for American Consolidated Natural Resources, formerly Murray Energy, since 2012. He also chairs the board of the Ohio Coal Association.

Murray was among corporate contributors involved in an elaborate $60 million bribery-for-energy legislation scheme alleged by federal prosecutors, though the coal giant has not been charged with a crime in the ongoing probe. Russo's ad targets statements by Carey that he didn't lobby on the bill, when he did. He says that's a mischaracterization.

Russo tells voters she would be “a voice for working families" if elected, rejecting claims in grainy Carey attack ads that paint her as a Democratic loyalist who would vote “100% with Nancy Pelosi” when she got to Washington.

“I have been an independent voice in the Statehouse. It has been very clear from my time in office that I am not about partisan politics, I'm not about special interest politics,” she said in an interview last week. “I'm there to represent the people that I serve and their issues. I am a pragmatist. I'm interested in getting things done. If my opponent wants to run against this made-up bogeyman, then that's pretty typical of the Republican playbook.”

Two different organizations tried to set up debates where the candidates could have hashed out their differences before voters. Carey declined to participate.

“We don’t believe that candidates who lie in their ads or run illegal ads are worthy of debating,” Carey's spokesperson Blaine Kelly said. Russo's campaign stands by the ads.