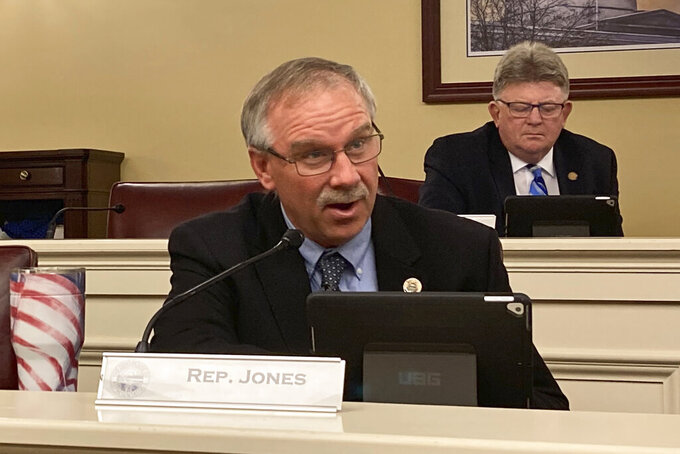 Andrew Welsh Huggins, ASSOCIATED PRESS
In this Oct. 6, 2021 photo, Rep. Don Jones, a Freeport Republican, asks a question about a bill that would limit employers' abilities to require that workers receive the coronavirus vaccine at a legislative hearing in Columbus, Ohio. Jones is the sponsor of legislation pending in the House State and Local Government Committee that would prevent districts from requiring that history or civics teachers "discuss current events or widely debated and currently controversial issues of public policy or social affairs." (AP Photo/Andrew Welsh-Huggins)

COLUMBUS, Ohio (AP) — A pair of Republican-backed bills in the Ohio House would restrict how the topic of racism is taught in K-12 schools as part of a conservative broadside against a 40-year-old scholarly theory more typically associated with higher education classes in college or law school.

Neither of the two bills pending before the House State and Local Government Committee mention the phrase critical race theory. But the bills' sponsors and their supporters have made clear in public comments that that theory is the target of the legislation. The bills introduced in May are similar to legislation introduced nationwide by GOP lawmakers.

There was a hearing about the bills earlier this month and no additional hearings scheduled for now. Here is a look at critical race theory and the Ohio legislation:

WHAT IS CRITICAL RACE THEORY?

Critical race theory is part of a scholarly movement developed in the 1970s that examines U.S. history and modern society through a focus on the legacy of slavery, racism and discrimination.

Critics say it proposes that the United States is a fundamentally racist country.

Although the theory has been around for decades, conservatives more recently began focusing on it as a way to oppose classroom efforts to discuss topics related to race and racism. Such pushback became stronger following the country’s reckoning over racial injustice and police brutality in the aftermath of the 2020 murder of George Floyd, who was Black, by white Minneapolis police officer Derek Chauvin.

WHAT DO OHIO'S BILLS SAY?

Both bills aim to restrict the teaching of controversial subjects, though they use different language. In one bill, sponsored by Republican Rep. Don Jones, districts would be prevented from requiring that history or civics teachers “discuss current events or widely debated and currently controversial issues of public policy or social affairs.”

It also would prevent instruction that says the advent of slavery “constituted the true founding of the United States.”

Another bill, sponsored by GOP Reps. Sarah Fowler Arthur and Diane Grendell, prohibits teaching or promotion of “divisive concepts.” The exception is that such concepts could be taught if done so in an “objective” or “impartial” manner, say the bill sponsors, who are white as is the majority — 86 seats — of representatives in the 99-seat House.

Both bills take aim at the notion of race “scapegoating,” or teaching anything that places blame on someone for past deeds by people of the "same nationality, color, ethnicity, race, or sex.” Both bills would also ban instruction that suggests the U.S. is intrinsically racist.

As of late August, 27 states have introduced legislation or taken other steps to restrict teaching critical race theory or limit ways that educators can discuss racism and sexism, according to an Education Week analysis. Twelve states have enacted such bans, either through legislation or other means.

IS CRITICAL RACE THEORY BEING TAUGHT IN OHIO?

At this time, there's little evidence that the subject is being taught in Ohio schools under the name critical race theory.

However, critics who allege such instruction is taking place say the absence of the phrase itself doesn’t mean the concept isn’t present. They cite examples of policies approved by Ohio districts that make references to disrupting “systemic inequities,” engaging students who feel “marginalized,” or eliminating “racism, bias, inequity.”

Middletown City Schools in southwestern Ohio, for example, drew criticism for hiring a consulting company to produce a strategic plan for the district that includes phrases such as “diversity, equity and inclusion” and the effects of “personal and institutional bias.”

Oakwood City Schools in suburban Dayton came under scrutiny for a list of staff professional development resources, which included references to social injustice as a result of “systemic racism.”

The district doesn't teach critical race theory, said spokesperson Traci Hale. “As a community of learners, it is important for our educators to be knowledgeable about current topics and terms,” she said.

Such examples are collected by the conservative Protect Ohio Children Coalition, which encourages community members to anonymously submit evidence of critical race theory in classrooms.

WHAT ARE PEOPLE SAYING ABOUT THE BILLS?

Sponsors of the legislation say their bills themselves are anti-racist by emphasizing that all people should be treated equally.

“The purpose of this bill is to provide equal and non-discriminatory education opportunities to students, while preventing further division among Americans,” Grendell said earlier this year.

Detractors say that rather than provide for unbiased discussion, the bills would remove historical truths in favor of false objectivity.

“Racism and sexism are real issues in our society,” said Fan Jiang of the Athens Asian American Alliance. “They will not disappear simply because the teachers are not talking about them, or the students are not discussing them.”

Jiang, a U.S. citizen, told lawmakers that as a native of China, she was sensitive to government suppression of thought, which she likened the Ohio bills to.

This story has been corrected to say that opponents, not backers, of critical race theory reject arguments from The New York Times Magazine’s 1619 Project.