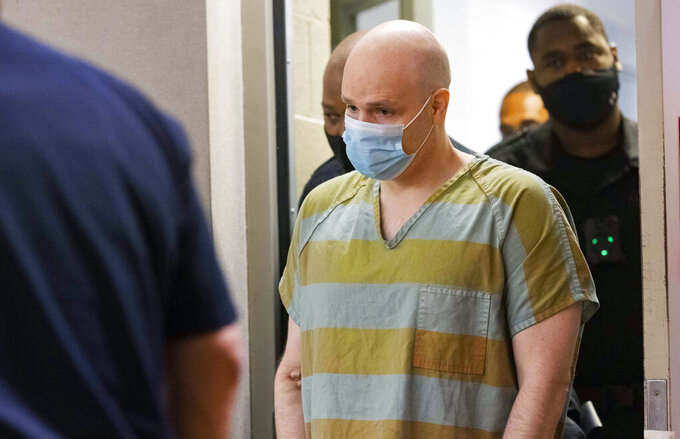 Juan Figueroa, ASSOCIATED PRESS
FILE - Randy Halprin, who was part of the so-called “Texas 7” gang who escaped from prison in 2000 and was convicted in the murder of an Irving police officer, enters the 283rd Judicial District Court on July 14, 2021, at Frank Crowley Courthouse in Dallas. A state district judge on Monday, Oct. 11 said the Jewish death row inmate should get a new capital murder trial because the judge who presided over his case held anti-Semitic views. (Juan Figueroa/The Dallas Morning News via AP, File)

A Jewish death row inmate who was part of the so-called “Texas 7” gang should get a new capital murder trial because the judge who presided over his case held anti-Semitic views, a state district judge said Monday.

Dallas Criminal District Court Judge Lela Mays found that her predecessor, former Judge Vickers Cunningham, violated Randy Halprin’s right to a fair trial by not recusing himself from Halprin's trial for bias. She recommended that the Texas Court of Criminal Appeals toss Halprin's conviction and death sentence imposed by Cunningham.

Cunningham could not immediately be reached for comment Monday.

Halprin and six other inmates escaped from prison in 2000. The group later robbed a sporting goods store in Irving, Texas, fatally shooting responding police officer Aubrey Hawkins as they fled.

The men were referred to as the “Texas 7” gang of escaped prisoners. One member killed himself before the group was arrested. Four have been executed, while Halprin and Patrick Murphy await execution.

The allegations against Cunningham, who oversaw Halprin's trial in 2003, came after a Dallas Morning News story in 2018 revealed that he has a living trust that rewards his children for marrying straight. Cunningham confirmed the trust but said he was not a bigot, the newspaper reported.

The story prompted an investigation from Halprin’s lawyers, which found that Cunningham used racial slurs and anti-Semitic language to refer to Halprin and some of his co-defendants, according to an appeal they filed in state court. Cunningham also denied this.

The Texas Court of Appeals halted Halprin's execution in 2019, and ordered the case be sent back to the Dallas County court that convicted him so it can review Halprin's claims.