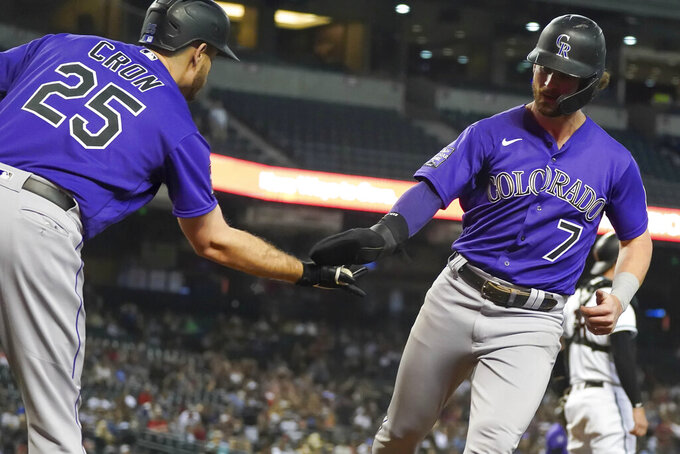 Darryl Webb, ASSOCIATED PRESS
Colorado Rockies' C.J Cron (25) gives a high five to Brendan Rodgers (7) after he scores the go-ahead run against the Arizona Diamondbacks' during the ninth inning of a baseball game Friday, Oct 1, 2021, in Phoenix. Rockies won 9-7 over the Diamondbacks. (AP Photo/Darryl Webb)

Senzatela was signed by Colorado as a non-drafted international free agent on July 8, 2011, out of Valencia, Venezuela. Over five seasons with Colorado, he's gone 36-35 with a 4.84 ERA.

Known for his effective breaking ball, Senzatela has thrived at hitter-friendly Coors Field. His .667 winning percentage in Denver is the second-highest by a Rockies starter at home (minimum 40 starts) in team history. He trails only Jorge De La Rosa, who was 53-20 at home (.726).

The 31-year-old Cron hit .281 with a team-leading 28 homers after signing a free-agent deal last February. His three grand slams this season were the most in franchise history.