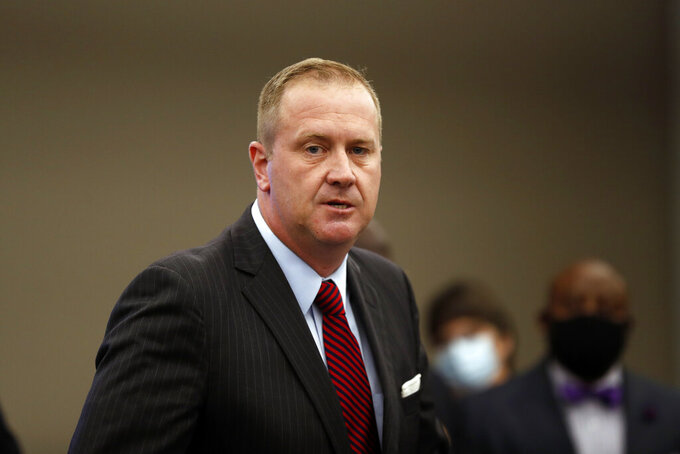 Jeff Roberson, ASSOCIATED PRESS
FILE - In this Aug. 6, 2020, file photo, Missouri Attorney General Eric Schmitt speaks during a news conference in St. Louis. Schmitt, sued China over the coronavirus. He signed on to a failed lawsuit seeking to overturn the results of the 2020 presidential election. Now, as he positions himself for a Senate run, he’s turning his attention closer to home and suing to stop mask mandates in the state's liberal cities and Missouri schools. (AP Photo/Jeff Roberson, File)

COLUMBIA, Mo. (AP) — Missouri’s Republican attorney general, Eric Schmitt, sued China over the coronavirus. He signed on to a failed lawsuit seeking to overturn the results of the 2020 presidential election. Now, as he positions himself for a Senate run, he’s turning his attention closer to home and suing to stop mask mandates in the state's liberal cities and Missouri schools.

For state attorneys general hoping to gain greater influence and advance their own political agendas, filing lawsuits has become an increasingly common strategy. The partisan divide over coronavirus restrictions has given GOP politicians an opening to showcase their conservative bona fides to voters and capitalize on the public’s exhaustion with COVID-19 protocols a year and a half into a pandemic that shows no signs of waning.

For Schmitt, the fight over mask mandates could bolster his support in a crowded primary for retiring GOP Sen. Roy Blunt’s seat in next year’s midterm elections.

Schmitt is “taking advantage of what we call the politics of grievance,” said retired St. Louis University political scientist Steven Puro. “He’s going to play on that as much as he possibly can.”

Schmitt’s spokesperson framed the lawsuits as his way of “fighting back against government bureaucrats.”

“Nothing is off the table in our mission to beat back the encroachment and overreach from local to federal government on the liberties and freedom of the people of Missouri,” Chris Nuelle said in a statement.

Schmitt, 46, signed on to a letter Thursday from two dozen Republican state attorney generals warning the White House of impending legal action over President Joe Biden’s federal vaccine mandate that all employers with more than 100 workers require them to be vaccinated or be tested for the virus weekly.

“Missouri has been a national leader in pushing back against the Biden Administration & Covid related mandates,” Schmitt tweeted last week. “Biden’s historic overreach on vaccine mandates will not stand in Missouri.”

While the job’s responsibilities vary by state, most attorneys general are tasked with defending state laws and constitutions and acting as consumer-protection watchdogs.

They’ve long had the power to file headline-grabbing lawsuits with a political edge, but Paul Nolette, an associate professor at Marquette University and an expert on state attorneys general, said they’ve traditionally stuck to lower-profile lawsuits against scammers and defending state laws that are challenged in court.

“Now Republican (attorneys general) are flexing their muscles during the Biden administration as well, particularly on this issue of suing municipalities and essentially their own constituents," Nolette said. "I would classify that as still unusual, but it's become more common just in the last few years.”

GOP attorneys general in red states now are zeroing in on liberal policies adopted by majority Democratic cities, the one place where Democrats have some control, he said.

For example, Texas Attorney General Ken Paxton has been fighting in court with San Antonio since 2018 over the city's handling of immigrants suspected of being in the United States illegally, accusing city officials of violating a new state law targeting what conservative critics call “sanctuary cities."

The practice is less common among Democratic attorneys general. Not because they’re less political, Nolette said, but because fewer people tend to live in rural Republican strongholds, so the impact of blocking conservative policies there is less attention-grabbing.

Even though Schmitt is technically suing his own constituents, University of Central Missouri political scientist Robynn Kuhlmann said Schmitt's lawsuits will resonate in drastically different ways with Republicans and Democrats.

“While it may seem as if he’s attacking constituents of the liberal perspective, I think it’s important to note for those who are conservative it is in essence defending rights and liberties,” Kuhlmann said.

In fighting mask mandates, Schmitt is acting against the guidance of public health officials, who encourage mask wearing to stop the spread of COVID-19, particularly when it's caused by the more contagious delta variant that has caused a spike in cases, hospitalizations and deaths. Schmitt’s lawsuit cites the low death rate among school-age children, and he has stressed the importance of letting families make their own health decisions.

A Columbia Public Schools spokesperson said in a statement after Schmitt sued that the district is “extremely disappointed to learn that the Missouri Attorney General has chosen to pursue litigation against the school district for providing safety measures for its scholars, teachers, and staff members.”

But Republicans might find there are limits to such moves. A recent Republican-fueled effort in California to recall Democratic Gov. Gavin Newsom, in part over COVID-19 restrictions that he imposed, came up short amid increasing worries over the perniciousness of the delta variant.

Lawsuits can be used as a tool for politically ambitious attorneys general to drum up name recognition, fundraising and votes, Nolette said.

The tactic works, Nolette said, because attorneys general can sue and immediately cash in on the recognition for taking action. The process is more complicated for a state lawmaker, who must work for months and sometimes years to get legislation passed.

“Some of these lawsuits, even if the expectation is that they’re not really going to go anywhere, the fact is you can always sue and get a hearing, even if the argument is ridiculous,” Nolette said.

Schmitt's lawsuit seeking to hold China responsible for the COVID-19 pandemic is pending in federal court, and the Chinese government has refused to participate. Lawsuits against other countries typically don’t go anywhere because U.S. law generally prohibits them.

Schmitt is making more progress on his lawsuits against local masking rules. He secured a win last month when a Missouri judge banned St. Louis County from enforcing its mask mandate while Schmitt's lawsuit plays out in court.

A number of Missouri attorneys general have used the position as a steppingstone to higher political office.

Republican John Ashcroft was attorney general from 1977 to 1985 and later was elected Missouri governor and U.S. senator and then appointed U.S. attorney general under President George W. Bush.

The stakes are high for Schmitt, who faces a slew of other Republican Senate candidates, including former Gov. Eric Greitens, who resigned amid scandal in 2018, and Mark McCloskey, who was recently pardoned along with his wife for waving guns at social justice demonstrators last year. U.S. Reps. Vicky Hartzler and Billy Long also are running.

And even though Missouri now is considered a red state, there’s concern among Republicans that the crowded field could give Greitens a path to the GOP nomination and possibly squander what should be an easy win for Republicans.

“This allows for name recognition to occur in this crowded field, and also some credit claim in that he has this position as attorney general and is acting on defending Missouri’s laws,” she said.