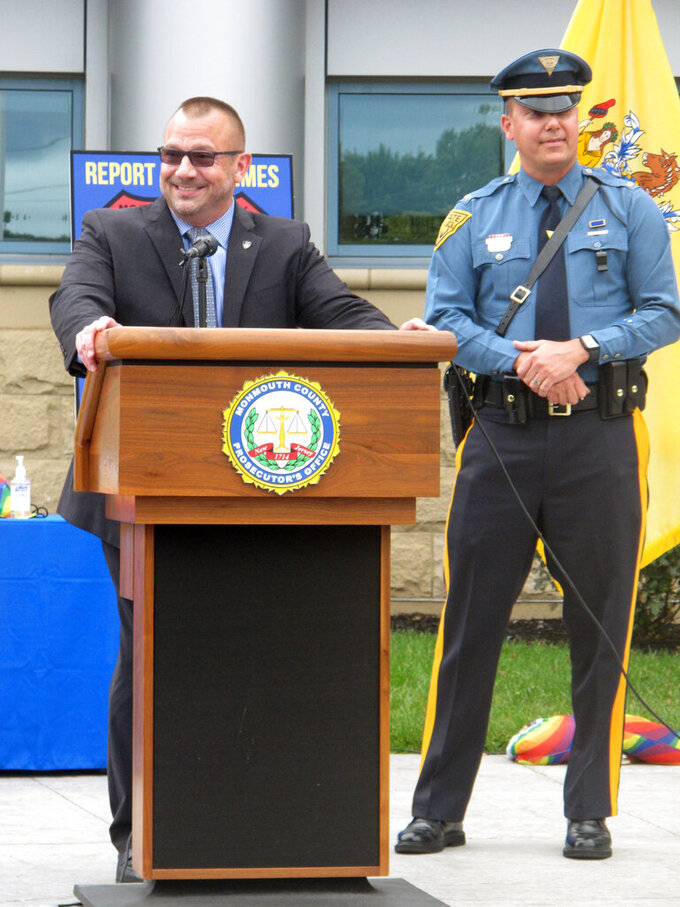 Wayne Parry, ASSOCIATED PRESS
David D'Amico, chief investigator with the Middlesex County Department of Corrections, left, and Lt. John Hayes of the New Jersey State Police, right, speak at a news conference Wednesday, Oct. 6, 2021 in Freehold N.J. announcing an outreach program to the LGBTQ community, including a program where victims of bias crimes can seek temporary shelter in local businesses while waiting for authorities to arrive. (AP Photo/Wayne Parry)

FREEHOLD, N.J. (AP) — Building relationships with the LGBTQ community and enrolling local businesses to act as shelters where bias crime victims can seek immediate help are parts of a new program rolled out Wednesday by a New Jersey prosecutor's office.

Acting Monmouth County Prosecutor Lori Linskey introduced the program to assign liaisons to members of the gay, lesbian and other communities to chip away at decades of distrust between them and law enforcement.

She enlisted the help of three Jersey Shore cities to conduct the pilot program called “Safe Place,” modeled after a similar initiative in Seattle. The program works with local businesses to display the rainbow-colored “Safe Place” logo in their windows to let victims of bias or hate crimes know their establishment is somewhere they can enter to seek shelter while authorities are called.

Christian Fuscarino, executive director of Garden State Equality, New Jersey's largest gay rights organization, welcomed the outreach. He said years of mistrust have built up between law enforcement, dating back to years when authorities would raid and close establishments catering to a gay clientele.

“We are working to address decades of injustices, and this should help,” he said. “There has been a culture of implicit and even explicit bias in law enforcement that needs to be addressed. This is an important step, and we commend Prosecutor Linskey for her help.”

The prosecutor said her office is also soliciting the help of members of law enforcement who are part of the LGBTQ community, pledging to support them in their jobs.

David D'Amico, chief investigator for the Middlesex County Department of Corrections, who is gay, said it can be challenging to work “in a profession that sometimes does not look at you as an equal.”

State Police Lt. John Hayes, who also is gay, said the program is “a step in the right direction.”

The Safe Space program will initially operate in Asbury Park, Long Branch and Red Bank, three of the county's largest urban areas. Linskey said her agency is the 293rd to adopt such a program in the U.S., Canada and Europe.