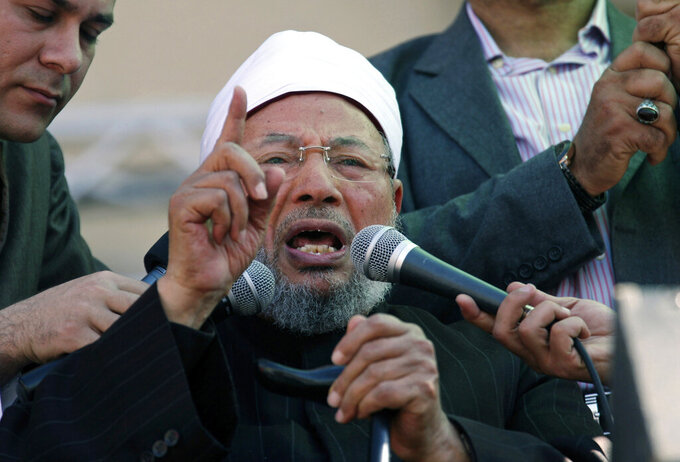 Khalil Hamra, ASSOCIATED PRESS
FILE -Senior Egyptian cleric Sheik Youssef al-Qardawi speaks to the crowd as he leads Friday prayers in Tahrir Square in Cairo, Egypt, Feb. 18, 2011. Al-Qardawi, a cleric who was seen as the spiritual leader of the pan-Arab Muslim Brotherhood, has died at the age of 96. (AP Photo/Khalil Hamra, File)

DOHA, Qatar (AP) — Youssef al-Qaradawi, an Egyptian cleric who was seen as the spiritual leader of the Muslim Brotherhood and became the Islamist “voice of revolution” during the popular uprisings around the Arab world more than a decade ago, died Monday at the age of 96.

Al-Qaradawi, whose death was reported on his official website, was central in shaping the Brotherhood’s ideology in the 1990s and 2000s of using democratic means to achieve their goal of Islamic rule in Egypt and other nations. His critics accused him — and the Brotherhood — of hiding extremism behind moderate rhetoric.

That ideology was tested on the ground in the Arab Spring revolts of 2011, when Egypt’s longtime autocrat Hosni Mubarak was ousted — and ended disastrously.

The Brotherhood came to power in subsequent elections, the freest ever held in Egypt. But Brotherhood moves fueled opponents’ fears that the group aimed to monopolize power. After giant protests, the army ousted the Brotherhood in 2013 and crushed it in a bloody crackdown. The ensuing rule of President Abdel Fattah el-Sissi has been criticized by rights groups as more autocratic than Mubarak’s.

Al-Qaradawi died in the Gulf Arab nation of Qatar, where he had been living in exile for decades and was supported by the ruling family. In 2013, he was tried and sentenced to death in absentia in Egypt.

Al-Qaradawi’s high point came in February 2011, days after Mubarak’s ouster. He made a triumphant return to Egypt and gave a speech to a gigantic crowd in Cairo’s Tahrir Square, the epicenter of the anti-Mubarak protests.

“The revolution is not over until we have a new Egypt,” he said, calling for a purging of Mubarak-era corruption and urging Copts and Muslims to remain united as they had been during protests.

It was a speech that avoided strong shows of Islamist or Brotherhood rhetoric. Still, many secular pro-democracy advocates saw his appearance in the square as symbolizing Islamists’ moves to dominate the uprising and claim it in their own name.

Al-Qaradawi had been in the public eye since the 1990s as a pioneer among Muslim clerics of using then-newly emerging satellite TV to project their voice regionwide.

He had a popular talk show on the Qatar-based Al-Jazeera network called “Shariah and Life,” in which he took calls from across the Muslim world and offered advice on everything from mundane aspects of daily life to controversial political issues. He presented himself as an international, independent alternative to leading Muslim clerics in Arab countries who were usually dominated by their governments — though critics accused him of being a tool of Qatar.

He supported suicide bombings and other attacks by Palestinians against Israel. He also voiced support for the Iraqi insurgency against the U.S. presence in Iraq after the 2003 invasion that toppled dictator Saddam Hussein.

He had strongly criticized the U.S.-led invasion, calling on all Muslim nations at the time to prepare to fight the Americans there “if the Iraqis fail to drive them out.”

“By opening our ports, our airports and our land, we are participating in the war,” al-Qaradawi said in a pointed critique of U.S.-allied Arab governments. “We will be cursed by history because we have helped the Americans.” Notably, Qatar hosts American troops and now serves as the forward headquarters of the U.S. military’s Central Command.

But al-Qaradawi described his own thought as “al-wasatiya,” meaning a middle path — conservative but not rigid or extremist, as he depicted it. That earned him many admirers across the Arab and Islamic world, even among some liberals.

He was sharply critical of Arab regimes but said he opposed violence in overthrowing them, to distinguish himself from radical organizations like al-Qaida — though he was often reluctant to outright condemn militant groups.

Throughout, he was close to the Brotherhood.

Al-Qaradawi was born on Sept. 9, 1926 in a small village in Egypt’s Nile Delta. He studied at Egypt’s Al-Azhar University, the leading center of Sunni Muslim scholarship, and became involved with the Brotherhood.

He fled to Qatar in the early 1960s, when then-president Gamal Abdel Nasser waged a fierce crackdown on the group. A U.S. diplomatic cable from 2005 published by WikiLeaks said Qatar, a strong backer of the Brotherhood, gave al-Qaradawi “substantial properties" and income.

When the wave of “Arab Spring” protests began in late 2010 in Tunisia and intensified in 2011, al-Qaradawi threw his support behind them, criticizing clerics who called for obedience to rulers.

He raised controversy by calling for the killing of Libyan dictator Moammar Gadhafi and by backing NATO’s intervention in Libya in 2011 in support of rebels. Gadhafi was eventually ousted and killed.

Al-Qaradawi also painted the civil war in Syria in starkly sectarian terms, despite his past call for better Sunni-Shiite relations. In a 2013 speech, he said Shiites — Iran and Hezbollah backing President Bashar Assad — were waging a “war against Islam and the Sunnah.” He urged “all those capable of Jihad and fighting” to travel to Syria — seen as encouraging young Muslims to join militant groups in Syria.

In Egypt, al-Qaradawi threw his weight fully behind the Brotherhood-led government, headed by a veteran of the group, Mohammed Morsi. He called Morsi’s election “a victory for the revolution” and said he would achieve “justice, freedom and human dignity.”

As opposition to Morsi and the Brotherhood swelled, he said protests against them were forbidden, insisting Morsi was the “legitimate” ruler and that the people should obey him. Al-Qaradawi's son, Abdel-Rahman, criticized his backing of Morsi.

The military’s ouster of the government was followed by a crackdown in which hundreds of Brotherhood members were killed and thousands arrested.

Egypt banned the Brotherhood as a terrorist group. Ahmed Mussa, a prominent pro-government TV host, called al-Qaradawi “the biggest inciter of terrorism” and blamed him for attacks inside Egypt. Bahrain, Egypt, Saudi Arabia and the United Arab Emirates included al-Qaradawi on a list of dozens of organizations and individuals sanctioned for alleged terrorism in 2017 as part of a diplomatic dispute with Qatar.

Krauss reported from Ottawa, Ontario; Samy Magdy in Cairo contributed to this report.