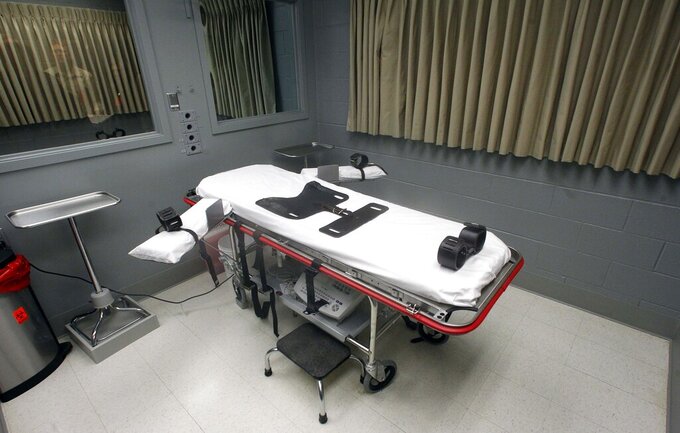 Rick Bowmer, ASSOCIATED PRESS
FILE - This Nov. 18, 2011, file photo, shows the execution room at the Oregon State Penitentiary in Salem, Ore. The Oregon Supreme Court stuck down the death sentence of an inmate in a ruling, Thursday, Oct. 7, 2021, that found lawmakers had fundamentally altered "prevailing societal standards" for executions with a 2019 law change. Experts believe the decision could eliminate the death sentence for all inmates facing the penalty. (AP Photo/Rick Bowmer, File)

SALEM, Ore. (AP) — The Oregon Supreme Court struck down the death sentence of an inmate in a ruling Thursday that found lawmakers had fundamentally altered “prevailing societal standards” for executions with a 2019 law change.

Oregon Public Broadcasting reports experts believe the decision could eliminate the death sentence for all inmates facing the penalty.

State lawmakers passed SB 1013 in 2019. The bill narrowed what crimes qualify as aggravated murder — the only charge that carries capital punishment in Oregon — to murders of children younger than 14 years old, murders of law-enforcement officers, terrorist attacks that kill at least two people, and prison killings carried out by someone who’d previously been convicted of murder. That’s a narrower scope than what formerly constituted aggravated murder.

While the law change included a provision that did not make it retroactive, the court’s ruling appears to do that, relying on a section of the state’s Constitution that prohibits disproportionate punishments.

“My expectation is that every death sentence that is currently in place will be overturned as a result of this,” said Jeffrey Ellis, co-director of the Oregon Capital Resource Center.

The ruling Thursday stems from the case of David Bartol, who killed Gavin Siscel on June 4, 2013 in the Marion County Jail. At the time, Bartol was awaiting trial in a separate case.

The Oregon Supreme Court upheld Bartol’s conviction, but ordered him resentenced, likely for first-degree murder, which is punishable by life in prison rather than death.

“The enactment of SB 1013 reflects a legislative determination that, regardless of when it was committed, the conduct that had constituted ‘aggravated murder’ does not fall within the narrow category of conduct for which the death penalty is appropriate,” the court wrote in its opinion. “Given that determination, we conclude that, although the legislature did not make SB 1013 retroactive as to sentences imposed before its effective date, maintaining defendant’s death sentence would violate Article I, section 16 (of the Oregon Constitution.)”

“Regardless of one’s opinion of the voter passed death penalty, the fact remains that every one of these previously sentenced cases represents a victim, victims’ families and loved ones whose faith in the criminal justice system is shaken today,” Clarkson said in a statement.