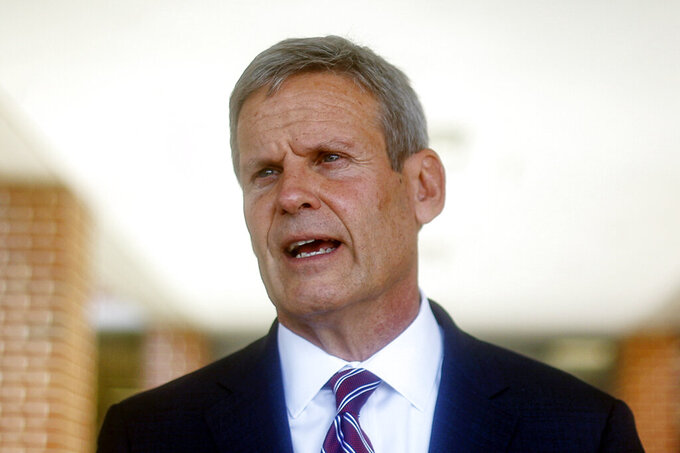 Troy Stolt, ASSOCIATED PRESS
FILE - Tennessee Gov. Bill Lee speaks to local media at the front of McConnell Elementary School on Aug. 11, 2021 in Hixson, Tenn. Emails obtained by The Associated Press show that Lee’s office warned top legislative staffers that a bill limiting public health measures during the COVID pandemic would violate federal law. They passed it anyway and the Republican governor signed it into law even though his legislative counsel warned that Tennessee risks losing federal funding for violating the Americans with Disabilities Act. (Troy Stolt/Chattanooga Times Free Press via AP, File)

NASHVILLE, Tenn. (AP) — Tennessee Gov. Bill Lee on Thursday granted clemency for the first time since taking office to 17 people, among them a man who was freed in 2019 after spending 12 years in prison for a killing he has long argued he didn't commit.

Lee exonerated Adam Braseel, who was charged in the 2006 bludgeoning of Malcolm Burrows despite no physical evidence tying him to the scene. He was sentenced to life in prison.

Braseel eventually left prison after entering an Alford plea to aggravated assault. The plea allowed him to maintain his innocence but left him with a felony on his record. Only the Tennessee governor has the power to change that.

“After reviewing the unique merits of each case, I have made the decision to grant these individuals executive clemency,” Lee said in a statement. “These men and women have shown they are ready for productive lives beyond their sentences, and I appreciate the Board of Parole’s consideration in this process.”

Along with the exoneration, Lee fully pardoned 13 people and commuted the sentences of three others. An exoneration means the governor declares the applicant didn't commit the crime; a pardon serves as a statement of forgiveness; while commutation shortens a sentence but lets the conviction stand.

Among those Lee pardoned was Zenobia Dobson, who has become a vocal advocate for ending gun violence after her 15-year-old son died in 2016 while protecting friends from a shooting in Knoxville. Dobson had been convicted of property theft and various misdemeanors between 1999 and 2011 that were related to substance abuse.

“Zenobia Dobson has become a guiding force in Knox County following the tragic murder of her son who died six years ago while shielding three children from a random drive-by shooting,” said Rep. Sam McKenzie, a Democrat from Knoxville. “She has since dedicated her life to preventing more senseless killings in her community."

Those who will have commuted sentences include Mindy Dodd of Rutherford County, who was imprisoned for 20 years for the 2000 shooting death of her then-husband and former stepfather. Advocates who fought for her commutation argue that Henry Dodd abused her throughout her childhood and married her after she became pregnant at 18 years old.

Last year, the Tennessee Parole Board unanimously voted that her sentence be commuted to immediate parole eligibility. Lee agreed to do so in Thursday's announcement.

Jamie Grimes of Davidson County, and Charles Hall of Shelby County will also have commuted sentences.

Lee, a Republican, was elected governor in 2018 and has focused on pushing criminal justice reform measures during his time in office. He commonly repeats that Tennessee must be “smart on crime while being tough on crime" as he balances a Republican-controlled General Assembly that has favored increasing criminal penalties.

When asked if he'll grant more clemency before the end of his first term, Lee said he was unsure and pointed to the lengthy process each clemency application takes.

Lee is currently running for reelection in 2022.