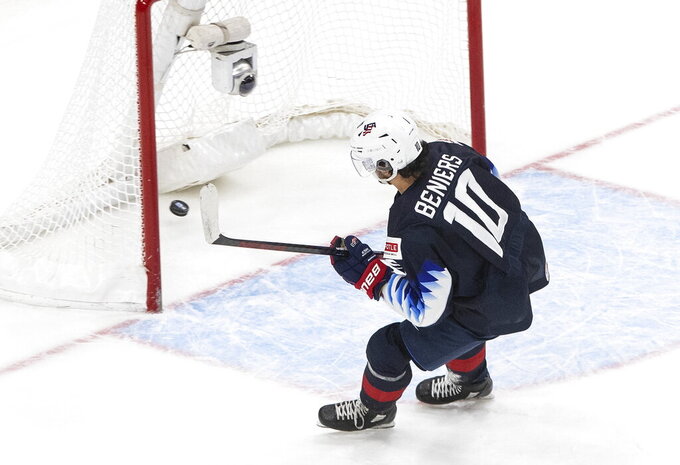 SEATTLE (AP) — The Seattle Kraken found their potential center of the future with the first draft pick in franchise history.

The expansion NHL franchise selected University of Michigan player Matthew Beniers with the No. 2 overall pick in the entry draft on Friday night.

There was no big party for the first selection in Kraken history, unlike earlier this week when fans crammed into a lakeside park for Seattle’s selections in the expansion draft. But with the Kraken home arena in the background, general manager Ron Francis announced Beniers as the inaugural selection from inside the Space Needle.

“There’s so many words I can use describe it. It’s surreal. It’s honestly amazing. I could not be happier, and I’m honestly at a loss of words just thinking about what just happened,” Beniers said. “Being drafted in the first place, going second overall and going to a new expansion team, I’m so unbelievably excited and thankful for everything.”

But when Francis called Beniers to let him know of the selection, he was inadvertently dumped into voicemail.

“That was great,” Francis said. “We’re all excited to call him and say hello and the phone goes right to voicemail. So a lot of fun, but we got him the next time around."

Beniers made perfect sense for Seattle to grab. A two-way center, Beniers had 10 goals and 14 assists in 24 games in his first season at Michigan. The 18-year-old also played for the United States at the world juniors and the world championships, appearing in 13 games on the international stage in the past year.

Beniers was originally bound for Harvard but when its season was canceled, pivoted to joining the Wolverines. Now the question will be whether Beniers chooses to join the Kraken now or if he’ll return to Michigan for at least one more season.

“Every kid is different and I think the key is when you go and see them play you want to do what’s right for the kid and make sure that you’re not rushing them,” Francis said. “The NHL is a heck of a league, they’re big guys, strong guys and fast guys and you want to make sure that when we bring them in you’re giving them the opportunity to be successful.”

Beniers sounded likely to return to Michigan, saying there is a desire to have a normal college season after last year’s truncated schedule. But said there would be discussions with Francis and the Kraken front office on what is the best decision.

“I want to have a real year. I want to try and make a run at the national championship,” Beniers said. “Obviously, if that’s not the best decision for my development and me as a hockey player then so be it, but I think those are kind of some perks, something that I kind of want to do. But I think at the end of the day it’s kind of what is the right thing for me to do as a hockey player and as a person.”