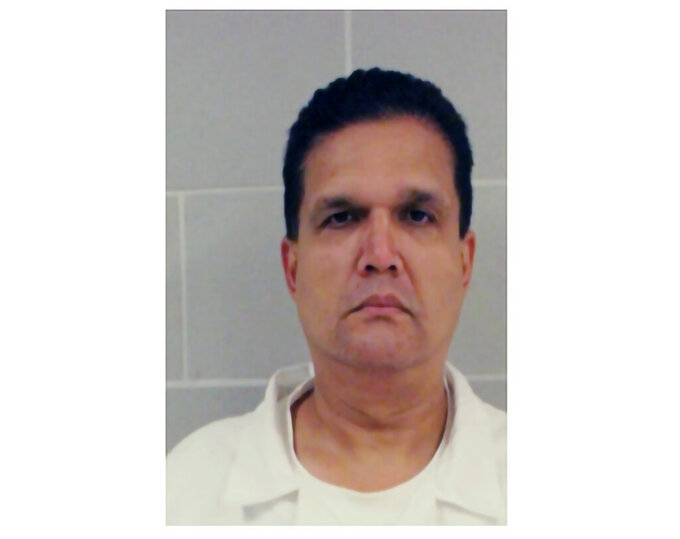 Uncredited, ASSOCIATED PRESS
This undated photo provided by the U.S. Marshals Service shows Leonard Francis, also known as "Fat Leonard," who was on home confinement, and allegedly cut off his GPS ankle monitor and left his home on the morning of Sept. 4, 2022. Multiple agencies were searching for Francis on Tuesday Sept. 6, but they acknowledged he may already be in Mexico with the border only a 40-minute drive from his home. (Courtesy of U.S. Marshals Service via AP)

SAN DIEGO (AP) — The big, jovial personality of the Malaysian defense contractor nicknamed “Fat Leonard” got him favors across Asia, where he became rich by wooing U.S. Navy commanders with wild sex parties and luxury gifts.

Leonard Francis has admitted to being the mastermind of one of the most extensive bribery scandals in U.S. military history. Now after staging a bold escape executed in broad daylight over the holiday weekend in a upscale suburban San Diego neighborhood, many are asking if he employed that same charm to get help to disappear. Here is a look at the case and what is known and not known.

WHO IS ‘FAT LEONARD' AND WHY WAS HE CONVICTED?

Francis owned and operated his family's ship servicing business, Singapore-based Glenn Defense Marine Asia Ltd. or GDMA, which supplied food, water and fuel to vessels. An enigmatic figure, Francis was a main point of contact for U.S. Navy ships at ports across Asia for more than two decades. He was photographed wining and dining with top Navy brass. He plied officers with Kobe beef, expensive cigars, concert tickets and wild sex parties at luxury hotels from Thailand to the Philippines. In exchange, officers concealed his company's overbilling of the U.S. military. After investigators caught on, Francis was lured to San Diego on false pretenses and arrested at a hotel in 2013. He pleaded guilty in 2015, admitting that he had offered more than $500,000 in cash bribes to Navy officials, defense contractors and others who helped his scheme. He used his influence to get commanders to steer their ships mostly from the Navy's 7th Fleet to ports he controlled so he could cover up fake charges. Prosecutors say he bilked the Navy out of at least $35 million.

WHY DID HE NOT GET SENTENCED YET?

Francis was facing up to 25 years in prison but his sentencing hearing date was pushed back repeatedly until the latest date of Sept. 22 because he was a key witness for the U.S. Attorney's case. As part of his plea deal, he agreed to cooperate with the investigation stemming back to 2009. With his help, prosecutors secured the convictions of 33 of 34 defendants, including more than two dozen Navy officers. But while in custody, he was hospitalized and treated for renal cancer and other medical issues, undergoing unspecified procedures, according to court transcripts. After leaving the hospital, he was allowed by the judge to stay at a condominium in 2018 to continue to receive medical care there but was ordered to wear a GPS monitoring ankle bracelet and have round-the-clock security guards on site.

WHAT IS KNOWN ABOUT HIS HOUSE ARREST?

Francis moved from the condominium after having a falling out with the landlord, according to court transcripts. But rather than returning to jail, Francis' attorneys were able to convince the judge to allow him to continue to remain on medical furlough. He moved to another rental property. He would remain under house arrest for nearly five years. But U.S. District Court Judge Janis Sammartino expressed repeated reservations about the arrangement that included Francis covering the costs of the private security firm in charge of watching him. It was unclear from court records how many guards were on duty and where they were stationed, and what adjustments were made depending on his medical care. At a December 2020 court hearing, the judge learned that the home had been left unguarded for three hours while a security officer went to lunch.

WERE CONCERNS RAISED BEFORE HE ESCAPED?

Yes. Sammartino questioned defense attorneys who said Francis was too ill to be able to be treated by medical staff at the U.S. Bureau of Prisons. She also was surprised to learn at one closed-door hearing that Francis' three children and his mother were living in the main residence on the property where he was. His attorney asked the judge to allow him to walk his children to school and go to the grocery store on occasion, but she expressed concern that he already had a lot of leniency, according to court transcripts. Questions about whether he still warranted medical furlough came up in late 2020 after the judge was sent a letter from a San Diego surgeon who gave Francis a clean bill of health after treating him. But his attorney argued there were other health issues, and his medical furlough was extended to May 23, 2022. No other public transcripts regarding his living situation were released.

HOW DID HE ESCAPE?

Neighbors spotted U-Haul trucks coming and going from the residence as early as Friday, two days before Francis snipped off his monitoring bracelet with heavy scissors and disappeared on Sunday. San Diego police were called out to the home nearly six hours later.

WHAT IS BEING DONE TO FIND HIM?

Ten U.S. federal, state and local agencies are searching for Francis. Mexican authorities have also been notified to be on alert for him since his home was only 40 minutes from the U.S.-Mexico border. The U.S. Marshals Service has put out a notice asking the public for information.