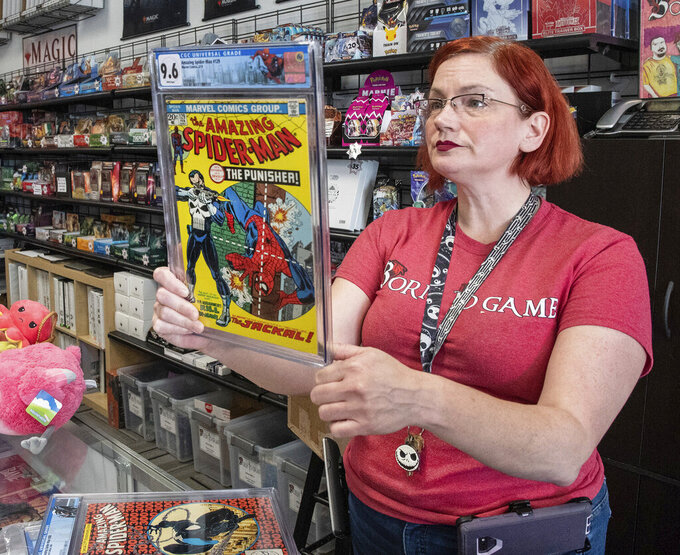 DOVER, Del. (AP) — Clad in his iconic Superman T-shirt, James Jerman provided the stereotypical look one would expect from a man who owns his own gaming and comic book shop.

But then, faster than a speeding bullet, he reached for a Spider-Man comic book that was marked by the first appearance of The Punisher — worth $13,000 — and it was quickly apparent that while owning Born to Game in Dover can be fun and games, it can also be serious business.

Mr. Jerman has owned Born to Game on the south end of a shopping center at 547 South Red Haven Lane, behind Piazza Mia Italian Bar & Grill in South Dover, for the past six years. He has another location in Middletown that has been in business for the past three years.

Gaming and comic books are just something that are in his blood.

“I played games all over the place (when I was younger),” Mr. Jerman said. “It’s always been about the community. The biggest thing about opening a game store is … I always had a family game night with my parents.

“That was something that’s been lacking with the current generation, and I was like, ‘No, I wanted to bring that back.’ So, we have board games and families go play in the back room and everything.”

He added, “I used to play at Gladiators, Illusions … there’s a mess of (gaming) places down in Salisbury (Maryland) up to Dover. I played at Days of Knights (in Newark) for 15 years, probably.”

The most popular game of choice at Born to Game is “Magic: The Gathering,” which is a fantasy card-based game.

“Magic: The Gathering’ is our most popular game,” said Mr. Jerman, who co-owns his store with his wife, Samantha Ames. “Obviously, the big craze right now is Pokemon. We have Pokemon in stock and everything, where Walmart and Target are always sold out of that. We try to keep it in stock.”

A player in “Magic” takes the role of a Planeswalker and battles with other players by casting spells, using artifacts, and summoning creatures as depicted on individual cards drawn from their individual decks.

A player defeats their opponent typically, but not always, by casting spells and attacking with creatures to deal damage to the opponent’s ‘life total,’ with the object being to reduce it from 20 to 0.”

FILLING A VOID IN DOVER

It’s that passion that drove him to open his own gaming store, particularly after other locations in the Dover area were closing over the past several years.

“That’s been basically the thing that drove it is that a lot of the Dover stores were closing,” Mr. Jerman said. “There were still people that needed a place to come and play and trade and do all the stuff they wanted to do.”

Opening a gaming and comic book shop was something he had always wanted to do but he didn’t want to compete against his favorite store — Superior Comics — which closed its doors in 2015.

Once that store closed, Mr. Jerman decided to make his foray into the business world.

He laughs at TV shows that depict gaming and comic book shops like “The Big Bang Theory” appearing to always be filled with obsessed, nerdy types. He said that’s far from the case.

“‘The Big Bang Theory’ is probably the worst (comparison),” said Mr. Jerman. “The owner of The Big Bang Theory comic book shop doesn’t make any money and has no friends … I’m like no, but I get a Stuart and a Leonard and everybody coming in the store, but I also get older people coming into the store looking for presents for their grandkids.

“My employees all look like they come from different walks of life and that’s how our customers are, too.”

It can be visually overwhelming when a customer first walks into the store with so many different things to look at.

Crystal Burnett, who manages the Dover location, said coming to work is not like going to a regular job.

“I love working here,” she said. “It is the best job ever because I’m very passionate about comic books, which were my first love. I’ve been into comic books since I was in middle school, so that’s my biggest passion here.

“We have a little bit of everything. I love the customers, the people that come in here helping people find stuff that they’re also passionate about and introducing them to new things that I think they’ll enjoy.”

Anyone interested in gaming is welcome to come and play their favorite games in the store’s dedicated gaming area or participate in its tournaments. It hosts five or six events a week.

“It’s exactly like a bowling league where you come in and you play every week and just hang out with your friends and have fun,” Mr. Jerman said. “Even when I have tournaments for say, ‘Magic,’ we have like 20 people play, and I’ll have five or six people who might not want to play in a tournament but they’re still there.

“They’re still hanging out with their friends, and they make new friends, and their little group grows and then occasionally they’ll be like, ‘Yeah, I’ll pay the $5 for the tournament.’”

Individuals can purchase Born to Game memberships for $100 for their first year with a $60 renewal fee which are valid at both locations.

The memberships take percentages off the purchase of items in the store and members receive special products and exclusive events.

“The companies know this business is community driven, so they usually give the stores a discount on promotional materials that I can give out to the players,” said Mr. Jerman.

He said that even his store, which is meant to escape from the routine and ordinary, was hit hard during the COVID-19 pandemic.

“COVID was very difficult for the two months that we were locked down,” he said. “I basically became a pizza delivery driver for the board games, so customers would call me up and I would throw (games) in my car and drive to their house and leave it on their porch at keep it six feet away.

“It was a struggle. As soon as we opened back up, I’ve had record sales. They wanted to come back and do everything and I was very happy about that.”