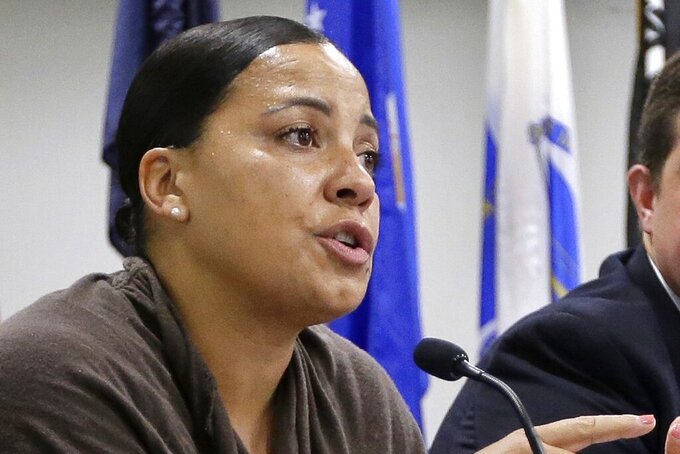 Steven Senne, ASSOCIATED PRESS
FILE — In this June 26, 2018, file photo, then-Suffolk County District Attorney Democratic candidate Rachael Rollins addresses an audience in Boston. Rollins, who has led the Suffolk County district attorneys office since 2019 as the first woman of color to serve as a district attorney in Massachusetts, is being nominated by President Joe Biden to become the state's top federal prosecutor. If confirmed by the U.S. Senate, Rollins would become the first Black woman to serve as U.S. attorney for Massachusetts. (AP Photo/Steven Senne, File)

BOSTON (AP) — Rachael Rollins, who has pushed for progressive criminal justice reforms as the first woman of color to serve as a district attorney in Massachusetts, has been nominated by President Joe Biden to become the state's top federal prosecutor.

If confirmed by the U.S. Senate, Rollins, who has led the Suffolk County district attorneys office since 2019, would become the first Black woman to serve as U.S. attorney for Massachusetts.

Rollins defeated the district attorney candidate backed by the longtime incumbent and police groups in the 2018 Democratic primary on a promise to decline prosecution for certain low-level crimes. She argued people shouldn’t be jailed for crimes that result from mental health or addiction problems and said she wanted to focus her attention on serious crimes, like homicides.

Rollins' office said in an emailed statement that she is “incredibly humbled” by the nomination and “remains focused on doing the hard work of keeping the residents of Suffolk County safe.”

Sens. Ed Markey and Elizabeth Warren, who recommended Rollins for the job, said they are “certain that she will be a tremendous U.S. attorney" and pledged to work to make sure she's confirmed as quickly as possible.

“District Attorney Rollins is a national leader on transforming the criminal justice system and shifting away from an approach based on punishment and penalization to one that combats the root causes of injustice, whether it be poverty, substance use, or racial disparity," they said in an emailed statement.

As the top prosecutor for Boston and surrounding communities, Rollins has been outspoken about the need for police reform in the wake of high-profile killings of people of color by law enforcement across the U.S. In an interview with The Associated Press in April, she said the country must do away with the misconception that questioning the police or suggesting ways they can improve means “you don’t back the blue.”

“The police have an incredibly hard job, and believe me, I know there are violent people that harm community and police but that’s not all of us. So we have to acknowledge that it’s not working and we have to sit together to come up with solutions, but it’s urgent,” Rollins said at the time. “I’m afraid, I’m exhausted and I’m the chief law enforcement officer so imagine what other people feel like,” she said.

Rollins has also sparred with Boston’s largest police union, which accused her last summer of inciting violence against law enforcement after she tweeted: “We are being murdered at will by the police ... No more words. Demand action.” Rollins rebuffed the union’s criticism, saying on Twitter, “White fragility is real people.”

In one high-profile Boston case, she moved to overturn the remaining firearm conviction for a man who spent more than 20 years in prison for the killing of a police officer before his murder conviction was overturned. Rollins' said the case of Sean Ellis, whose fight to prove his innocence was documented in the Netflix series “Trial 4," was “tainted by significant and egregious police corruption and prosecutorial misconduct.”

Rollins has also pledged to vacate drug convictions for potentially tens of thousands of defendants whose cases are tied to a troubled former state drug testing lab. Two chemists who worked there, Annie Dookhan and Sonja Farak, were convicted of tampering with evidence. Thousands of convictions across the state have already been tossed because of their misconduct.

As district attorney, Rollins has also vowed to push to end mandatory life-without-parole sentences for those who committed killings between the ages of 18 and 20. Such punishments are already outlawed in Massachusetts for juveniles. She said in an interview with the AP last month that she would ask the state's highest court to rule that people who commit killings as young adults a special sentencing hearing to consider their youth before punishments can be handed down.

“We are going to move now to make sure that overwhelmingly Black and brown men aren’t disproportionately impacted by the criminal legal system,” Rollins told the AP. “We’re going to do what’s right and at least have them have more hope and opportunity … to believe that they can change after 10, 15, 20 or so years.”