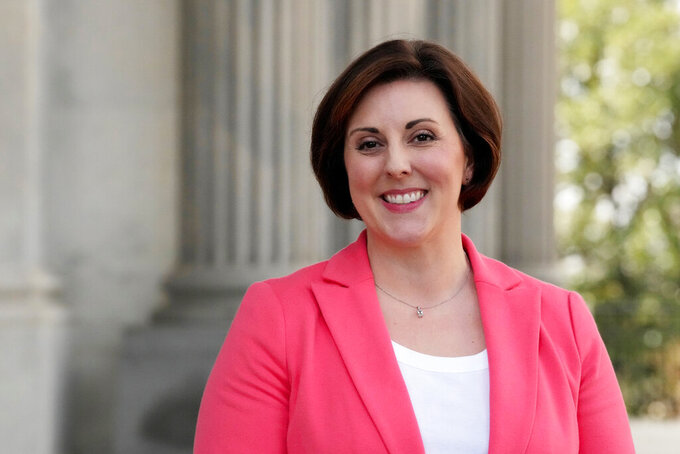 Meg Kinnard, ASSOCIATED PRESS
FILE - School-choice advocate Ellen Weaver smiles during a stop at the Statehouse on Monday, March 7, 2022, in Columbia, S.C. Weaver has received endorsements from a number of officials across South Carolina in her campaign for education superintendent. (AP Photo/Meg Kinnard, File)

COLUMBIA, S.C. (AP) — The South Carolina education superintendent candidate backed by the Republican establishment came back from her second place finish in the primary to win the runoff.

Also on Tuesday, state Rep. Krystle Matthews won the runoff to be the Democratic candidate for U.S. Senate and will take on incumbent Republican Sen. Tim Scott in November.

Conservative think tank CEO and chairwoman of the South Carolina Education Oversight Committee Ellen Weaver won her party's nomination on Tuesday, but she still could face a rough road to the job even in a GOP-dominated state.

A new South Carolina law requires education superintendents to have at least a master’s degree. Weaver doesn’t have one, but started a program in April. She said she should earn her degree in time.

Election officials said there is no precedent for what happens if she wins in November without an advanced degree, meaning the issue could be decided in court if someone sues.

Weaver will face Democrat Lisa Ellis in November. Ellis is a high school English teacher who founded the group SC for Ed on social media. Hundreds of teachers joined the group, calling for education improvements and higher pay and better treatment for teachers. The group brought 10,000 people to rally at the Statehouse, one of the biggest crowds of the past 20 years.

Ellis already has an advanced degree, as does the opponent Weaver defeated in the runoff, Palmetto State Teachers Association Executive Director Kathy Maness.

Maness won the primary, but fell well short of the 50% needed to avoid a runoff. She had grassroot support from teachers and educators.

Maness faced an onslaught of television ads, campaign mailers and appearances by prominent Republicans who painted her as a Democrat posing as a member of their party.

Maness secured one big endorsement when Republican Education Superintendent Molly Spearman, who is leaving the job after eight years, threw her support behind Maness. Spearman said Maness has been a teacher, knows what goes on in schools and is familiar with the legislative process.

Ellis has raised just under $15,000, according to state campaign finance reports, but won the three-way Democratic primary without a runoff.

There are six state House runoffs. Only one involves incumbents. Democratic Reps. Roger Kirby and Cezar McKnight were drawn through redistricting into the same district that stretches across three counties but is centered in Williamsburg County.

The two Democrats basically get to run primary night over again, but this time the winner likely returns to the Statehouse because no Republicans filed to run in the general election.

Tuesday's results were too early to call.

McKnight won the June 14 primary by seven votes out of the 5,557 cast. A third candidate threw the race into a runoff.

McKnight has represented much of the district for eight years from its anchor of Kingstree, but dwindling population in South Carolina's rural areas drew Kirby into the district when new lines were approved this year. Kirby is from Lake City and has been in the House as long as McKnight.

In the other five South Carolina House races, four Republican runoffs and one involving Democrats will decide nominees for open seats already controlled by their parties.

Six Republican House incumbents lost primary races earlier this month and a Democratic incumbent lost after her district was combined with another House member. About a dozen of the 124 members of the House also aren't running for reelection.