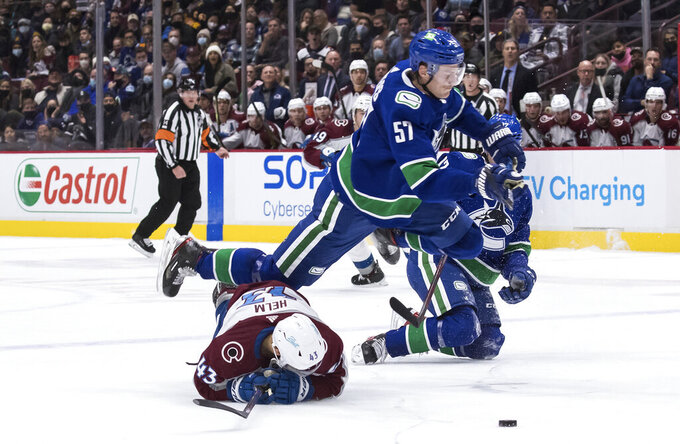 VANCOUVER, British Columbia (AP) — Nazem Kadri and Mikko Rantanen each had a goal and two assists as the Colorado Avalanche beat the Vancouver Canucks 4-2 on Wednesday night.

Cale Makar had a goal and an assist and Gabriel Landeskog added an empty-netter for the Avalanche. Darcy Kuemper stopped 30 shots.

The Avalanche have been paying more attention to details on their power play lately, according to Kadri, trying to execute better and make more tape-to-tape passes.

“The guys that we have out there have been communicating a lot and just trying to dot our I’s and cross our T’s, just trying to execute at a high level,” he said. “We’ve got the skill set out there, it’s just about executing the game plan and tonight was I think one of our better nights on the power play.”

Tucker Poolman had a goal and an assist, and Conor Garland also scored for Vancouver, which lost its fifth straight to fall to 5-10-2. Thatcher Demko had 26 saves.

The Avalanche were 3 for 5 with the man advantage while the Canucks went scoreless on three power plays. Vancouver came into the game with the worst penalty kill in the league at 62.3%.

“It’s a bit of a broken record, I’m sure,” Poolman said. “Just every game it’s a play here or there and it happens to be on special teams one way or another. But we’ve got to stick with it as a group here, play hard for each other and just keep grinding.”

Trailing 3-2 late in the third, the Canucks pulled Demko for an extra skater, but Landeskog buried an empty-net shot with 10 seconds left.

The Canucks briefly took the lead 1:30 into the third when Poolman scored his first goal in a Canucks jersey. His shot from the top of the faceoff circle hit Keumper and got caught under the goalie’s pads before trickling over the goal line to put Vancouver up 2-1.

“Frustrating to lose, especially with an effort like that,” Canucks coach Travis Green. “Five on five was one of our better games of the year. Obviously the penalty kill let us down.”

The Canucks had little time to celebrate, though — seconds later, Alex Chiasson was called for elbowing. The ensuing penalty kill saw Demko lunge across the goalmouth before Kadri tapped a puck into the open net to knot the score at 2-2 at 2:19.

Pushing and shoving followed the goal, and both Rantanen and Vancouver forward J.T. Miller were sent to the box for roughing.

The Avalanche regained the lead at 3:12 after Vancouver’s Quinn Hughes was called for cross checking Samuel Girard. Devon Toews sent a slick pass to Makar, who unleashed a rocket from the top of the faceoff circle to make it 3-2 just 10 seconds into the power play.

“I thought they were the quicker team, the hungrier team, the heavier team but I did like the resiliency from our guys to kind of stick with it,” Avalanche coach Jared Bednar said. “It wasn’t coming easy for us and then we had a good third. So, you fall behind and you’re on the road but our guys wanted it tonight and they went to work for the third period, had a good period.”

Colorado got off to a strong start, outshooting the Canucks 9-1 in the first 10 minutes of the game. Alex Newhook had a prime opportunity when he tried to jam a puck in from the top of the crease, only to see Demko make the stop. Russian rookie Vasily Podkolzin was called for hooking Newhook on the play.

The Avs capitalized on the man advantage at 7:17 with Rantenan blasting a wrist shot over Demko’s glove for his sixth goal of the season.

Vancouver tied it at 8:52 of the second following heavy pressure on the Avs’ net.

Garland had a shot at one side of the net blocked, with the puck bouncing out to Jason Dickinson at the top of the crease. Dickinson got a piece of the puck and sent it rolling through the blue paint as Garland made his way to the other side of the net in time to tap a backhanded shot in behind Keumper’s skate for his fourth goal of the year.

The Canucks followed the tally with a great 2-on-1 just moments later, but Keumper got a piece of Nils Hoglander’s shot, sending it up and out of play.

NOTES: Chants of “Fire Benning” broke out in the upper bowl midway through the third period, referring to Canucks general manager Jim Benning. ... Colorado D Bowen Byram was scratched from the lineup after suffering a concussion in the Avs’ win over the Canucks last week.

Avalanche: At Seattle on Friday night to wrap up a two-game trip.

Canucks: Host Winnipeg on Friday night in the middle game of a three-game homestand.