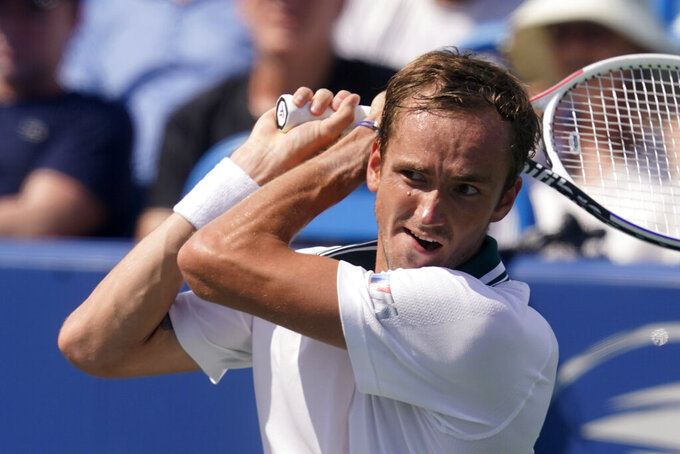 NEW YORK (AP) — Daniil Medvedev can offer a unique perspective on U.S. Open spectators: During his run to the final two years ago, he transformed from a “hated villain” who taunted the paying customers to a “fan favorite” backed by raucous support from some of those same folks.

So the second-seeded Russian, twice a Grand Slam runner-up, is as eager as anyone to see what things will be like Monday night when he steps into Arthur Ashe Stadium on Day 1 of the tournament.

Ticket holders were barred in 2020 because of the coronavirus pandemic, but the stands will be at 100% capacity again.

“It’s going to be funny on my first match to see how the crowd reacts to see me back in New York with fans here. I just hope, because it finished on a good note, it’s going to continue the same way,” said Medvedev, who faces Richard Gasquet on Day 1. “I love a New York crowd. It was (an) amazing experience in 2019, in every aspect. I’m just curious to see what it’s going to be like.”

Back then, Medvedev was jeered in Week 1 for his on-court behavior — and trolled his detractors by sarcastically thanking them, saying their vitriol was why he won — but by Week 2, the seats were packed with people pulling for him during a five-set loss to Rafael Nadal in the title match.

This time around, everyone 12 and older must show proof of at least one dose of a COVID-19 vaccine to enter the National Tennis Center — a change in policy announced Friday.

( Players don't need to be vaccinated; about half are, according to the ATP and WTA tours).

The U.S. Open is the first tennis major allowing fans at full capacity for the full two weeks since the Australian Open in January-February 2020.

“Having fans back is a total delight. It’s a treat. ... Especially New Yorkers. I mean, what better fans to have for our first 100% go than the local New York crowd?” said Reilly Opelka, an American seeded 22nd. “That’s what makes the U.S. Open the U.S. Open. That’s what makes sports in New York so iconic. That’s why the Yankees are a legendary team, the Knicks, as well. It’s the fans, the fan base, the culture of New York, New Yorkers.”

One on-court storyline outweighs all others: Novak Djokovic aims to make history in two significant ways at the U.S. Open. He can become the first man since Rod Laver in 1969 to win all four Grand Slam singles titles in a season and he can break the men's record of 20 career majors he shares with Roger Federer and Rafael Nadal.

“That would be incredible to witness,” said Casper Ruud, a Norwegian who is seeded No. 8. “He has 127 players that will try to stop him, of course, but he’s still the favorite.”

Federer and Nadal are done for the year with injuries, part of a significant list of absentees that includes 2020 champion Dominic Thiem and sisters Serena and Venus Williams.

For the women, contenders include two-time champion Naomi Osaka, who returns to Grand Slam action after a mental health break, and No. 1 Ash Barty. On Sunday, Osaka posted some thoughts on social media about self-worth, saying, “internally I think I'm never good enough,” that she's “gonna try to celebrate myself and my accomplishments more, I think we all should” and that she “can't burden myself with (others') expectations anymore.”

“The guard is definitely changing,” American Frances Tiafoe said, looking at the future of men's tennis with Federer at age 40, Nadal at 35 and Djokovic at 34. “It’s a matter of who’s going to take it.”

By speaking about her own anxiety and depression, Osaka drew put a spotlight on the issue of mental health. More players are discussing it openly, and the U.S. Tennis Association is making some changes.

Players have access to licensed mental health providers and quiet rooms as part of an initiative “to make mental health services as readily available to athletes as services for a sprained ankle,” said Dr. Brian Hainline, a USTA first vice president.

The USTA also said it will look at alternatives for athletes who cite mental health as a reason for not wanting to attend news conferences.

There won't be line judges at the U.S. Open this year, just chair umpires, with Hawk-Eye Live electronic line-calling used for all courts.

Last year, only the two main courts had line judges, Arthur Ashe Stadium and Louis Armstrong Stadium. During a match at Ashe against Pablo Carreño Busta, Djokovic was disqualified for hitting a ball that inadvertently struck a line judge in the throat after a game ended.