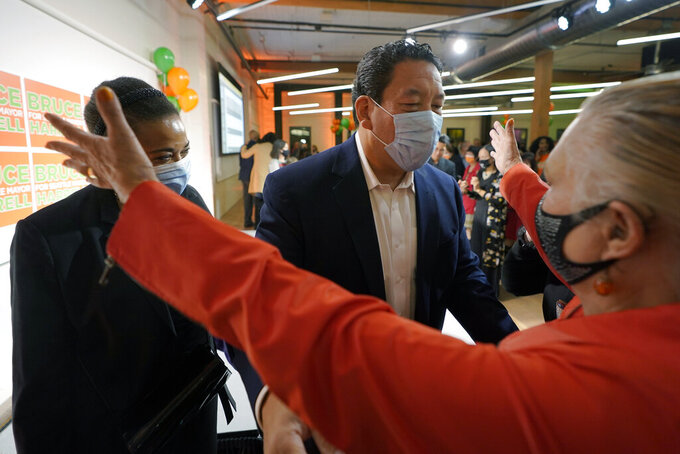 In the mayor’s race, Bruce Harrell, a former City Council president, was ahead of current City Council President M. Lorena González. Harrell had criticized his opponent for supporting the goal of cutting the Seattle Police Department’s budget in half — a position she has since softened.

And in the normally low-key contest for city attorney, which also drew national attention, Ann Davison, who pronounced herself a Republican in overwhelmingly Democratic Seattle in 2020, was leading police and jail abolitionist Nicole Thomas-Kennedy. Davison had said Thomas-Kennedy’s policies would jeopardize public safety.

While Harrell and Davison now hold strong leads, it could be days before there are clear winners. Liberal candidates in Seattle tend to gain ground in later vote counts. And in Washington’s vote-by-mail system, ballots need only be post-marked by Election Day, not received.

The moderate versus left dynamic in Seattle mirrored that in other liberal cities, with “back-to-basics” candidates who promise law and order facing off against progressives who insist that new approaches are needed to solve intractable problems. The Seattle positions are officially nonpartisan.

The 63-year-old Harrell, who grew up in a redlined city neighborhood, would be Seattle’s first Asian American and second Black mayor. He has strong backing from business and real estate executives.

“We’re going to bring Seattle back together,” Harrell told supporters after initial results were posted.

González, 44, the daughter of migrant farmworkers, would be the city’s first Latina mayor. She’s been endorsed by service-worker unions as well as environmental and urbanist groups.

In a statement Tuesday, she said she wasn't conceding, noting late-arriving votes and “the fact that the votes of so many of our voters, who tend to vote at the very end, have not been counted means we may not know until late in the week or next week who the next mayor will be.”

González and other leftist candidates have said they want to tax large corporations to provide money for affordable housing. They would end forcible removals of homeless encampments when there isn’t enough shelter or housing for the residents; end single-family zoning that prevents the construction of affordable housing; and invest in alternatives to policing, prosecution and incarceration.

Harrell has said he wants to bolster the police force. The department is down hundreds of officers because of retirements and resignations amid the talk of defunding, and Harrell has called for the hiring of more police, including some unarmed officers, as well as the appointment of a cabinet-level position to address rising gun violence in the city.

Harrell has courted voters frustrated with visible homelessness. He said he would keep parks clear of tent encampments while also increasing shelter space.

Incumbent Mayor Jenny Durkan is not running for re-election.

In the city attorney race, real estate and business executives have plowed money into opposing Thomas-Kennedy, who during and after the racial-justice protests of 2020 often tweeted vulgarly of her hatred for police.

Thomas-Kennedy is promising to stop prosecuting most misdemeanors. Citing her experience as a public defender, she describes such crimes as being largely crimes of poverty and says the city can’t prosecute its way out of the problem. Critics say her election would make it even more difficult to hire and retain officers and it would send a message to criminals that they can get away with stealing.

Davison has her own baggage in deep-blue Seattle: She announced in 2020 that she was leaving the Democratic Party and running for lieutenant governor as a Republican. She has stressed that she is “not a partisan” — and that she voted for Barack Obama, Hillary Clinton and Joe Biden for president, not Donald Trump.

In recent years, Davison has advocated for sweeping homeless encampments and moving residents into relief shelters set up in warehouses, and she has opposed safe-injection sites and a sex-education law.

Davison’s critics have questioned whether she would enthusiastically defend left-leaning laws adopted by the council, including renter protections and progressive taxation.

Virginia Newman, who dropped off her ballot on Tuesday, said she was concerned about law enforcement in Seattle, citing “the national outrage last year and what’s happening in our city in terms of keeping those who don’t have access to safe spaces who are marginalized and oppressed and how we police them unjustly in a city that considers itself so progressive.”

“I mean, our police will keep us safe,” Vert said. “And then we want to defund them. And then where does that leave us now with the problem we got? Look at the crime rates in Seattle right now.”