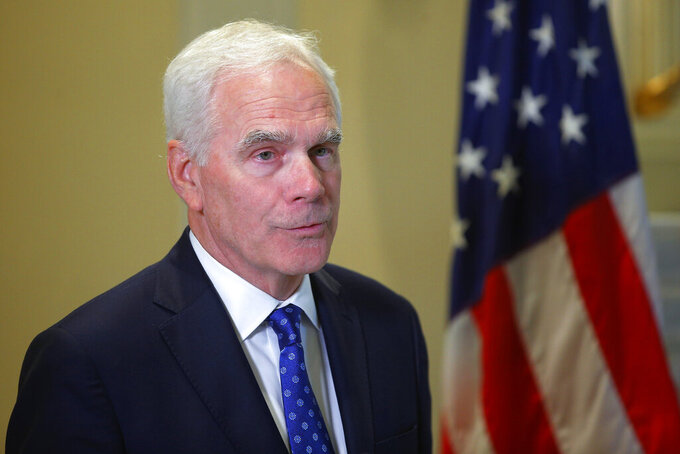 Bryan Terry, ASSOCIATED PRESS
FILE - In this July 23, 2021, file photo, John O'Connor speaks after being sworn in as Oklahoma's new attorney general at the state Capitol in Oklahoma City. Attorney General O'Connor says he is dropping his appeal to the U.S. Supreme Court in the first-degree murder case of death row inmate Shaun Bosse. O'Connor said Friday, Sept. 3, 2021, he made the decision after a state appellate court ruled the high court's decision in a landmark tribal sovereignty case does not apply retroactively. (Bryan Terry/The Oklahoman via AP, File)

O’Connor said he made the decision after a state appellate court ruled the high court’s decision in a landmark tribal sovereignty case — dubbed the McGirt decision — does not apply retroactively.

As a result of that ruling, Bosse’s conviction and sentence were reinstated earlier this week. Bosse, who is not Native American, was convicted in the 2010 killings of Katrina Griffin and her two young children, who were Native American, on land within the Chickasaw Nation’s historic reservation.

Still, O'Connor said he was pushing forward with U.S. Supreme Court appeals in other McGirt-related cases, asking the high court to either overturn or limit the decision. O'Connor claims last year's 5-4 decision was wrongly decided and has led to a “criminal justice crisis" in Oklahoma where federal and tribal courts are overwhelmed trying to prosecute cases that were previously handled in state courts.

“Although the Bosse case has now been resolved, many other criminal convictions were overturned because of the McGirt decision," O'Connor said in a statement. “Each case is important to the victims of the terrible crimes at issue, so we will continue to appeal these decisions to the U.S. Supreme Court."

Attorneys for some of the tribes have argued that the state’s dire warnings are overblown, and federal and tribal courts are working to handle the additional caseload.

“If the state continues trying to overturn rather than implement the law, we will continue to shine a light in court on the risks that attend their placing political position ahead of the public’s interest in the law," Stephen Greetham, senior counsel for the Chickasaw Nation, said in a statement. “In the meantime, we renew our call for all governments to work together out of our shared commitment to the public’s safety and effective law enforcement.”