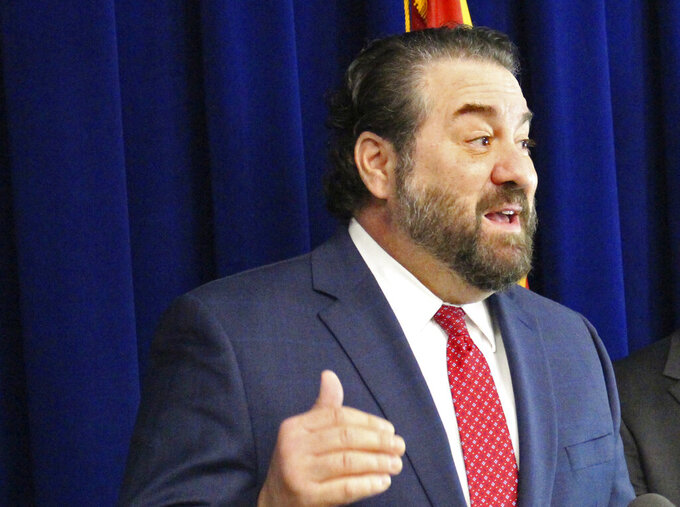 The unions joined the case last week after Phoenix's city manager said all employees must be vaccinated by Jan. 18 so the city can comply with the rules created by President Joe Biden's administration.

Federal contractors are required to have their employees vaccinated and an Occupational Health and Safety Administration rule that has been put on hold by a federal appeals court would require employers with more than 100 workers to regularly test anyone who isn't inoculated. Phoenix officials say the city has federal contracts so it must ensure all employees are vaccinated.

Attorney General Mark Brnovich, who is running in a crowded Republican primary for U.S. Senate, has for weeks drawn attention to his court filings opposing Biden's vaccine requirements, which he says are an abuse of the president's power.

That continued Monday as Brnovich called a news conference with leaders of Phoenix police and firefighter unions.

The vaccine mandate will drive people out of the profession and leave the remaining firefighters overworked, said Bryan Willingham, a Phoenix firefighter and executive vice president of the United Phoenix Firefighters Association.

“The community cannot lose these individuals. They can’t,” Willingham said. “We cannot survive the staffing crisis if we lose these members.”

Willingham said he's not disputing the vaccine's efficacy and doesn't believe he's contributing to false narratives about the vaccine, but rather sticking up for the firefighters he represents.

When a reporter asked Brnovich if he was vaccinated, his press secretary stepped in to call the question “inappropriate.” Brnovich waved her off and asked the reporter, “Have you had an STD?”

“The question should be, once you allow or cede this authority to the federal government, where does it stop?" Brnovich said.

Also Monday, two Republican members of the Arizona Corporation Commission proposed that regulated utilities be fined up to $5,000 per violation if they require employees to be vaccinated against COVID-19.

Commissioners Justin Olson, who is also seeking the GOP U.S. Senate nomination, and Jim O’Connor want the five-member commission to consider the new rule at their next open meeting in mid-December. They are worried that utilities such as Arizona Public Service and Tucson Electric Power will be compelled by Biden administration policies mandating that government contractors require their employees to take the vaccine.

“Ultimately, employees of a (regulated utility) should not have to decide between violating their convictions and keeping their job,” Olson and O’Connor wrote in a letter posted on the commission’s docket.

Sherine Zaya, a spokeswoman for Arizona Public Service, said in an email that the state's largest electric utility is “monitoring the developments relating to vaccine requirements.” She said COVID-19 safety protocols remain in place and that the company does not currently have a vaccine mandate.

O’Connor secretly lobbied utilities not to require the vaccine earlier this year, according to the Arizona Republic. He told the newspaper in May that thousands of people who received the vaccine had died and tens of thousands were left as “potted plants” and had lost their ability to function. There’s no evidence to back his statements about COVID-19 vaccines.

Arizona on Monday reported 3,249 new cases of COVID-19 and two additional deaths. Since the start of the pandemic, nearly 22,000 deaths and more than 1.2 million COVID-19 infections have been reported in the sate.