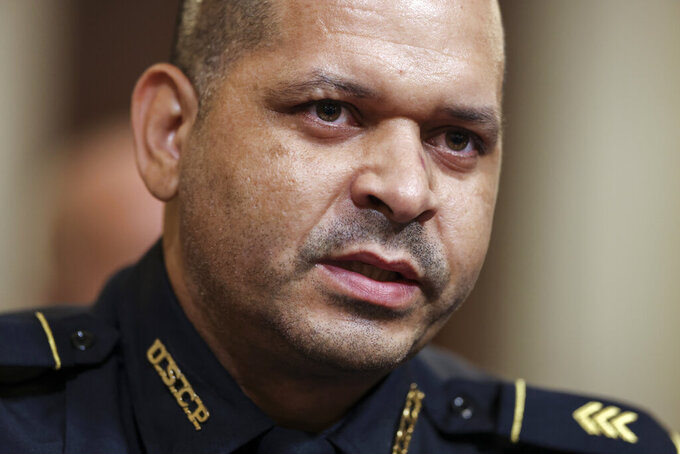 WASHINGTON (AP) — The Republican Party's self-portrayal as champions of law and order collided with searing testimony Tuesday from police officers themselves. Officers described in vivid, personal terms the terror of defending the U.S. Capitol from violent Trump-inspired insurrectionists on Jan. 6.

Will it matter in next year's elections?

Heading into the 2022 midterms, the GOP is seeking political advantage in Americans' concern about rising crime nationwide. But the police testimony at Tuesday's debut hearing of the congressional panel investigating the insurrection could undercut that effort.

It highlighted the GOP's effort to brush past the violence unleashed by a mob of then-President Donald Trump's supporters that endangered hundreds of officers.

“You’re talking about people who claim that they are pro-law enforcement, pro-police, pro-law and order," said Capitol Police Sgt. Aquilino Gonell. “Yet when they have the chance and the opportunity to do something about it, to hold people accountable, you don’t, you pass the bucket, like nothing happened.”

The hearing brought greater focus to how the debate over who's stronger or weaker on crime may unfold in elections. Republicans eager to pounce on Democrats may find themselves facing questions about whether the GOP did enough to stand up for law enforcement when put to the test.

Longtime GOP strategist Scott Jennings, who said it was hard to watch the officers’ testimony and not feel “outraged” and “disgusted,” said he expects crime to be “a massive issue” in the upcoming midterm contests. And while he expects Democrats to remain on the defensive, he said Republicans’ response to Jan. 6 had given Democrats an opening “to distract from some of their real shortcomings.”

“Republicans are certain to attack Democrats over what we would say are efforts to undermine the police. And Democrats are certain then to parry those attacks with, ‘Well you weren’t so pro-police when it comes to Jan 6,”’ he said. "When you’re thinking about campaign messaging, it just sort of makes it less clean.”

Republicans are struggling to form an effective response to the testimony. The two GOP members of the panel, Reps. Adam Kinzinger of Illinois and Liz Cheney of Wyoming, are participating over the objection of their party's leaders. House GOP Leader Kevin McCarthy backed away from the panel after Speaker Nancy Pelosi rejected two of his appointees, a decision that makes it harder for him to influence the narrative of the hearing.

Leading Republicans are ultimately working to avoid angering Trump, who remains popular among many GOP voters and is becoming increasingly assertive in the party's primaries.

What did he have to say about the hearing?

In a statement, he said nothing about the Capitol conduct of his supporters and offered no sympathy for the testifying officers. Instead, he repeated his broader accusations that the press is ignoring crime that “is eating away at our cities and our country.”

“America needs law and order, not defunding the police," Trump said. "We need our police back. America should and can be safe!”

Republicans’ tough-on-crime strategy, which dates back decades to the Nixon era, was a winning one in many 2020 congressional races after Trump and other candidates seized on calls from some Democratic activists to “defund the police” and invest in alternative measures as part of sweeping changes to address systemic racism. Candidate, now-President Joe Biden notably rejected those efforts and instead called for reforms paired with additional resources for law enforcement.

Polls have found Americans give Biden lower marks when it comes to handling crime than other issues, though a new poll from The Associated Press-NORC Center for Public Affairs Research found voters split on which party they trust to do a better job of handling crime. Some 32% said Republicans, 30% Democrats. Roughly a third said they trust neither or both equally.

While most voters have made up their minds about what happened, Alex Conant, a Republican strategist, said he expects Tuesday's testimony to nonetheless figure prominently in Democrats' campaign ads next year.

It's a tactic Democrats have already been using, including at the White House, where Press Secretary Jen Psaki on Monday accused Republicans of hypocrisy.

“Many of the Republicans in Congress who are the most vocal about supposedly supporting the police and law and order are the same ones who have dismissed and downplayed the shameful events of that day,” she said.