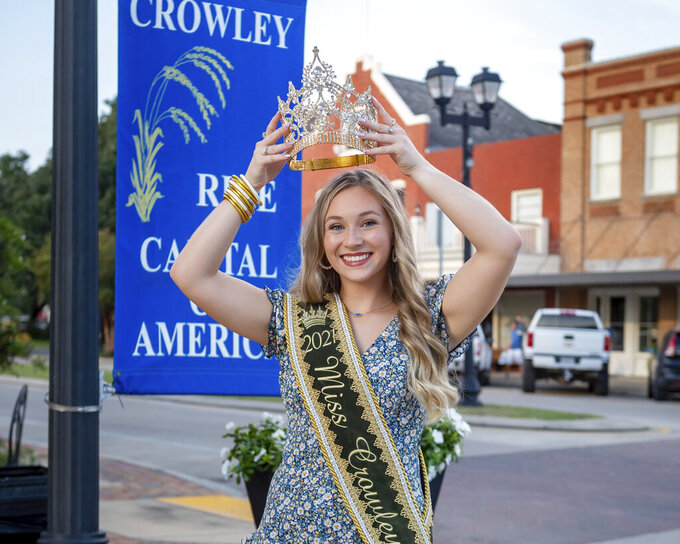 Scott Clause, ASSOCIATED PRESS
This Tuesday, Sept. 21, 2021 photo shows Molly Jo Webb, who was named the 84th Miss Crowley in Lafayette, La. . Tuesday, Sept. 21, 2021. Crowned in August, Webb represents the small town as the 84th Miss Crowley. Announcing the win on Facebook, her mom, Ginger Webb, remarked that 2020 was full of ups and downs, but “there are always special moments and people that are placed in your life that let you know all will be more than just OK!” (Scott Clause/The Daily Advertiser via AP)

CROWLEY, La. (AP) — When Molly Jo Webb and her family returned to their house in Lake Charles after Hurricane Laura had ripped through the city, they were relieved to see it had sustained minimal damage. Webb’s high school — where she was meant to be starting 11th grade after six months out due to COVID-19 — however, was another story.

They drove the few blocks to Barbe High School and knew Webb wouldn’t be going back to campus anytime soon. The school was so wrecked by the category 4 hurricane that it would remain closed another two months.

The Webbs worried about the impact of staying out of school even longer, so they started looking at schools in Acadiana where they’d evacuated. They decided to try Notre Dame High School in Crowley, at least temporarily, and Webb quickly fell in love with the small Catholic school.

A year later she still feels the same way. Now a senior, she’s a cheerleader and on the tennis team. She loves her classes, especially pre-calculus and history, and the friends she’s made in her new home.

“From day one I came into the school, and everybody knew my name,” she said. “They were so welcoming and kind. I didn’t always feel like the new kid.”

There are just over 100 students in her senior class at Notre Dame, a far cry from the 5A high school she left in Lake Charles. She likes being able to recognize everyone, seeing some of the same students in multiple classes, and to have more one-on-one time with teachers because classes are smaller.

But it’s not just the school that’s keeping the Webbs in the area. They’re putting down roots in Crowley, buying a home and embedding themselves into the community.

“I kind of forget I’m not from here. Crowley feels like home,” the 17-year-old said.

Crowned in August, Webb represents the small town as the 84th Miss Crowley.

Announcing the win on Facebook, her mom, Ginger Webb, remarked that 2020 was full of ups and downs, but “there are always special moments and people that are placed in your life that let you know all will be more than just OK!”

“Crowley has been all that and more to this young lady over the past year and will continue to bring her special memories to last a lifetime!” she continued.

Webb had a little pageant experience heading into the Miss Crowley contest. In eighth and ninth grades she competed in the Miss Cal Cam pageant in Calcasieu Parish. She didn’t place, but learned a lot about interviewing and being natural on stage, she said.

She’d been interested since middle school when she’d attended the International Rice Festival Queen’s Ball in Crowley. She was mesmerized by the beauty and the history behind the festival and the town, so when she moved there years later, it seemed like fate.

Webb signed up and got to work. Each night after school she would rehearse the contestants’ group dance routine and field practice interview questions from her mom, a former queen herself.

“I played in my mom’s crowns as a kid,” Webb admits with a smile.

She also has her sights set on the International Rice Festival pageant, which she’ll enter next fall after she passes the Miss Crowley title on to her successor.

To prepare she’s talking with past queens to better understand the pageant and studying the history of rice. She even has a favorite. Blanca Isabel Purple Rice is a naturally black-purple long grain rice that was developed by Milton C. Rush, a rice pathologist at Louisiana State University.

In the meantime, Webb is focusing on school and representing her town well.

“Some days, when I don’t have the crown on, it’s really regular,” she said. “When I have the crown on it’s a dream come true. I get to go out and show who I am and who Crowley is — how welcoming and loving of a town it is.”