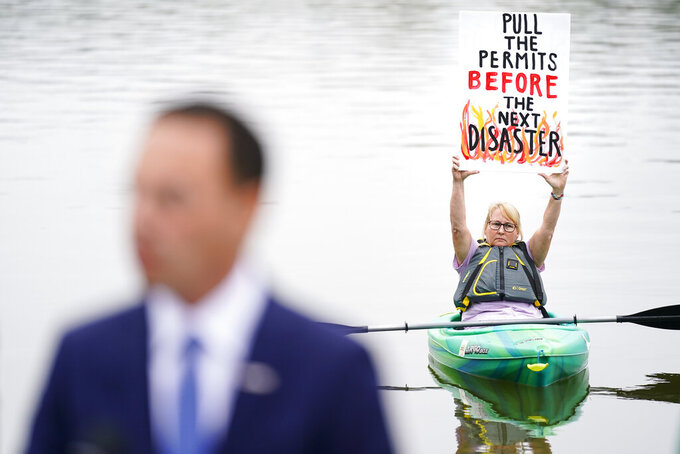 Matt Rourke, ASSOCIATED PRESS
FILE - In this Oct. 5, 2021, file photo, Libby Madarasz displays a protest placard against a pipeline as Pennsylvania Attorney General Josh Shapiro speaks during a news conference at Marsh Creek State Park in Downingtown, Pa. Shapiro, the Democratic candidate for governor, is breaking with Gov. Tom Wolf on the centerpiece of Wolf’s plan to fight climate change amid the strong and sustained pushback it has received from building trades unions that have long backed the party's candidates for governor. (AP Photo/Matt Rourke, File)

HARRISBURG, Pa. (AP) — Josh Shapiro, the Democratic candidate for governor, is breaking with Gov. Tom Wolf on the centerpiece of Wolf’s plan to fight climate change amid the strong and sustained pushback it has received from building trades unions that have long backed the party's candidates for governor.

Wolf — a fellow Democrat who has endorsed Shapiro, the state's two-term attorney general — has worked for two years to finalize regulations to make Pennsylvania the first major fossil fuel state to adopt a carbon pricing policy by imposing a price on carbon dioxide emissions from power plants.

Wolf has called it a “historic, proactive and progressive approach that will have significant positive environmental, public health and economic impacts.”

But Shapiro, in a statement from his 2-week-old campaign, suggested that Wolf's plan — which involves joining the multistate consortium, the Regional Greenhouse Gas Initiative, or RGGI — does not satisfy criticism that it will hurt the state's energy industry, drive up electric prices and do little to curtail greenhouse gases.

“We need to take real action to address climate change, protect and create energy jobs and ensure Pennsylvania has reliable, affordable and clean power for the long term," Shapiro said in the statement. “As governor, I will implement an energy strategy which passes that test, and it’s not clear to me that RGGI does.”

That, he said, “is a determination I will make as governor, in close consultation with workers and affected communities.”

Even if he wins next year’s election, Shapiro — as state attorney general — could before then be in the position of rendering legal judgement on Wolf’s carbon-pricing regulation.

Shapiro’s statement came just before he spoke Wednesday to a conference of union leaders from the pipeline trades. They are among the building trades unions whose members work on power plants, gas pipelines and refineries and, in addition to endorsements, those unions are a huge source of campaign contributions, primarily to Democrats.

Shapiro has made similar comments previously, both to the Indiana Gazette and officials from the Boilermakers' union. The day Shapiro formally announced his candidacy, Oct. 13, he had lunch at the electricians' union hall in Pittsburgh, where they asked him about his position.

“He told me he does not stand for RGGI the way it stands right now and he feels it should be run through the Legislature,” John Hughes, the business manager of Boilermakers Local 154, said Tuesday. “We should get everyone to the table and talk about it. ... I said, ‘We are going to support the guy who doesn’t support RGGI,’ and he told me, ‘I can’t support it as is.’”

Wolf said Tuesday that he still expects his plan to take effect next year. For now, Wolf’s plan faces solid opposition from Republicans in the Legislature and in the double-digit-deep GOP field running for governor in next year’s election.

Republicans who control the Legislature can halt Wolf’s carbon-pricing regulation if they win over enough Democrats to muster veto-proof majorities in both the House and Senate.

A Senate vote on a disapproval resolution Wednesday fell two short of that threshold after three Democrats joined all 29 Republicans in the 50-seat chamber. The Senate could take another vote in the coming months, once Wolf vetoes the resolution, as expected.

If the regulation survives, the state attorney general’s office must review it — as it does every regulation — for “form and legality” before it can take effect. Last October, Shapiro's office deemed a draft version of the regulation to be legal.

Wolf’s regulation also faces litigation from opponents who question its legality, and Shapiro's office could be tasked with defending it in court.

Heavily populated and fossil fuel-rich Pennsylvania has long been one of the nation’s biggest polluters and power producers, and the jury is out on whether a carbon-pricing program on power plants would significantly reduce greenhouse gas emissions.

Its effectiveness could depend on where emissions caps are set and whether money from the emissions credits are wisely spent on clean energy and energy efficiency programs.

In some cases, Wolf’s plan received support from backers of higher-efficiency natural gas plants and labor unions involved in renewable energy projects. It also motivated the Ohio-based owner of nuclear-powered Beaver Valley Power Station to put off plans to close the plant.

Coal advocates say the plan will prematurely shut down coal mines and coal-fired power plants in Pennsylvania, while many in the natural gas industry have opposed it.