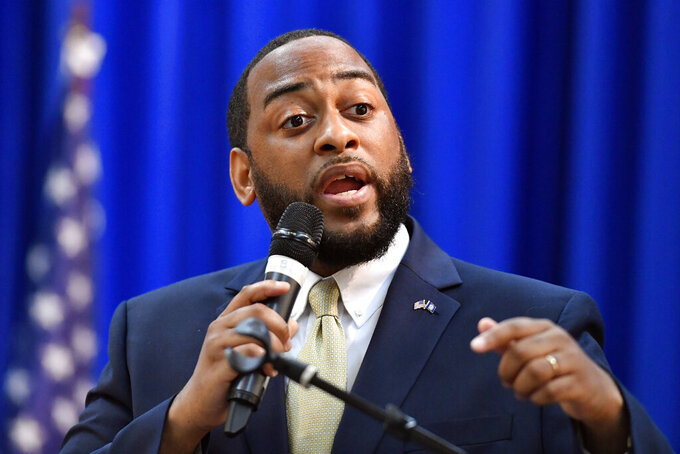 Timothy D. Easley, ASSOCIATED PRESS
FILE - In this July 1, 2021, file photo, Democrat Charles Booker speaks to a gathering of supporters as he announces his candidacy for United States Senate during a news conference at the Kentucky Center for African American Heritage in Louisville, Ky. Booker, who is a potential challenger to U.S. Sen Rand Paul, said in a social-media post Tuesday, Oct. 5, 2021, that he has raised $1.7 million from more than 55,000 contributions across Kentucky since entering the campaign. (AP Photo/Timothy D. Easley, File)

FRANKFORT, Ky. (AP) — Republican U.S. Sen. Rand Paul stepped up his fundraising during the summer, posting his best-ever total as a Senate candidate as he pursues a third term in Kentucky, his campaign said Tuesday.

Paul, who will be on the ballot next year, raised more than $4 million in the period between July 1 and Sept. 30, his campaign said in a news release. That number surpassed the amounts he raised in any three-month period during his two previous successful Senate campaigns.

Paul's potential Democratic challenger, Charles Booker, said in a social-media post Tuesday that he has raised $1.7 million — reflecting support from “grassroots small donors” throughout Kentucky — since entering the campaign at the beginning of the quarter.

The race will be a battle between candidates with starkly different philosophies. Paul is a libertarian-leaning conservative while Booker is a progressive who touts an activist role for the federal government.

In a tweet Tuesday, Paul characterized his quarterly fundraising as “MASSIVE.” Thanking his contributors, he wrote, “we’re in this fight to win and we will.”

Booker countered that he will develop the “largest statewide deep organizing campaign” that the Bluegrass State has ever seen, and he vowed to “change the face of Kentucky politics for decades to come.”

“Rand Paul and the Republican establishment are already on the full offense against us because they recognize us as a threat,” Booker said in a statement.

Booker, a Black former state lawmaker, rose to prominence in 2020 by touting racial and economic justice themes that coincided with protests erupting in Louisville and other cities across the country after the deaths of Breonna Taylor and other Black Americans in encounters with police. He touts Medicare for all, anti-poverty programs, a clean-energy agenda and criminal justice changes.

Paul, once a presidential campaign rival of Donald Trump, became an ally of the former president. First elected to the Senate in the tea party-driven wave of 2010, Paul rails against socialism and big-government programs he says encroach on individual liberties and drive up the nation’s debt.

In his statement Tuesday, Cox said Paul has been “at the forefront of standing up for our liberties, calling out unelected bureaucrats and fighting wasteful spending.”

Kentucky has not elected a Democrat to the U.S. Senate since Wendell Ford in 1992.