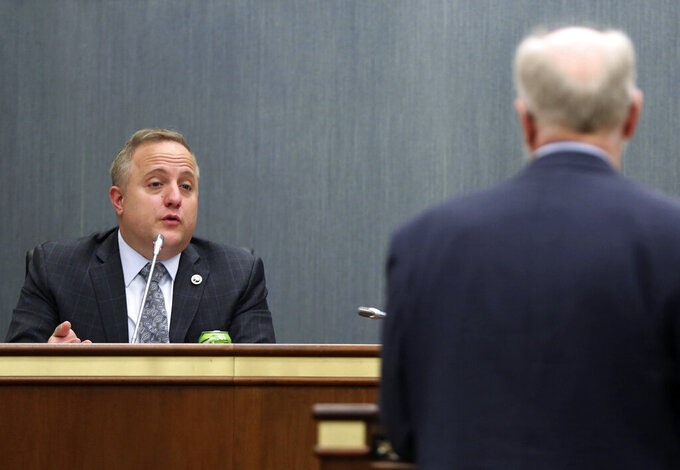 In an interview Thursday with The Associated Press, state Rep. Russell Fry said that he will be a candidate for Congress, running against Rice, who, up until his surprise vote in January, had always been a consistent supporter of the former president, representing an area that voted heavily for Trump in both presidential elections.

“I think the people of the Grand Strand and the Pee Dee deserve someone they can trust again, and I think I'm that person,” he added.

Rice was among 10 GOP representatives who joined Democrats on Jan. 13 in voting to impeach Trump for his role in the violence a week earlier at the U.S. Capitol. Trump was not convicted during a subsequent Senate trial.

A day after his vote, Rice told AP “it hurts my heart” to have gone against the president, but he decided to back impeachment after seeing what he characterized as Trump’s inaction during the Capitol Hill riot.

Since then, Republicans in his district and across the state have declared their displeasure with Rice, who has represented the district since its creation in 2012. The South Carolina GOP formally censured him to show disapproval over his vote, a step also taken by other party committees across the country to punish many of the 10 House Republicans who supported Trump’s impeachment.

The symbolic expression was seen as a possible bellwether of a tough 2022 primary for Rice, long a reliable backer of Trump’s policies who campaigned with the president and, according to FiveThirtyEight, voted 94% of the time in favor of Trump-backed legislation — the highest percentage among South Carolina’s current delegation.

Had he been in Congress at the time, Fry said that he would have opposed the impeachment vote, which he said came too quickly for a proper case to be made.

“At the very least, you have to build a case, and I think that the speed at which the House of Representatives brought impeachment charges and impeached President Trump really left devoid any factual record,” he told AP.

Fry, 36, has been in the state House since winning a special election in 2015. Planning to formally kick off his campaign August 5 in Myrtle Beach, Fry told AP that his legislative record opposing abortion and supporting pro-gun legislation makes him the right choice to represent the 7th District.

About a dozen Republicans have formally announced they will challenge Rice or expressed interest in doing so. Earlier this year, Rice told the AP he knew he’d likely face a difficult primary and that the impeachment vote could potentially cost him his seat.