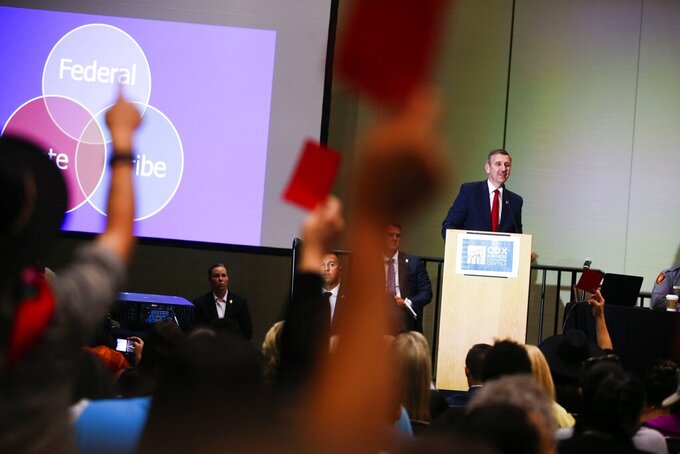 Michael Noble Jr., ASSOCIATED PRESS
Tulsa District Attorney Steve Kunzweiler speaks during panel to address post-McGirt concerns on Tuesday, July 13, 2021 in Tulsa, Okla. The panel ended early as frustration grew among audience members with the panel. The U.S. Supreme Court case McGirt v. Oklahoma, found that the Muscogee (Creek) Nation had remained a reservation after Oklahoma became a state, despite the fact that those lands had been parceled off and sold to private owners. (Michael Noble Jr./Tulsa World via AP)

OKLAHOMA CITY (AP) — Oklahoma Gov. Kevin Stitt was forced to end a forum early after he and a panel of district attorneys were berated as they sought to explain the position prosecutors are taking on the U.S. Supreme Court's McGirt decision.

Stitt ended the “McGirt v Oklahoma Community Forum” roughly an hour earlier than planned on Tuesday amid jeering from the audience as he tried to explain how the high court's decision had unintended consequences for victims of crime regardless of tribal citizenship.

The McGirt decision determined that a large swath of eastern Oklahoma remains an American Indian reservation and that state prosecutors lack the authority to pursue criminal charges in cases in which the defendants or victims are tribal citizens. It has led to dozens of criminal convictions in Oklahoma being overturned, including some death row cases. Most of those cases are having to be retried in federal court.

However, the main source of frustration for Native Americans who attended the forum was the lack of tribal representation on the panel, the Tulsa World reported.

The forum, which was organized by Tulsa County District Attorney Steve Kunzweiler and Stitt's office, was designed to inform the public about the implications of the McGirt decision. Many Native American activists and attorneys have accused Stitt and prosecutors of trying to stir up public sentiment against the decision. Most of the prosecutors on Tuesday were subjected to questions about why tribal leaders or their attorneys general were not among the panelists.

“Had an official invitation been extended to Muscogee Nation, we would have welcomed the opportunity to work with local officials to make this an informative and productive session. But that invitation never came,” Muscogee Nation Principal Chief David Hill wrote in his statement released Tuesday afternoon. “Unfortunately, this has become a pattern of behavior.”

Stitt, a Cherokee Nation citizen himself, said his office emailed attorneys general for the Cherokee, Choctaw and Muscogee nations on June 3 notifying them about the forum. But the tribes each said they did not receive a meaningful invitation.

Okmulgee-based attorney Brenda Golden briefly addressed the crowd in the forum to call for civility, but maintained that the state should understand that the Supreme Court has affirmed tribal sovereignty.

“Tribes and the state are equals as far as the federal government is concerned,” Golden said. “We are a sovereign nation, and the same for our states. They (the states) don’t like that. The fact that now their power is getting taken away is why we are here today.”