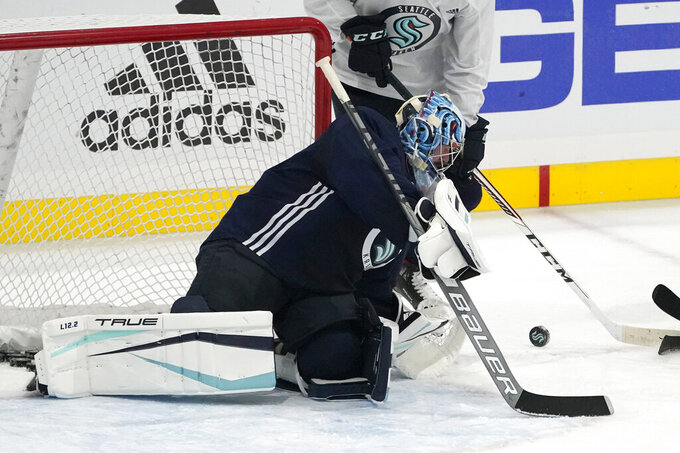 Ted S. Warren, ASSOCIATED PRESS
FILE - Seattle Kraken goalie Philipp Grubauer watches the puck as he takes part in a practice session during a media event for the grand opening of the Kraken's NHL hockey practice and community facility in Seattle, in this Thursday, Sept. 9, 2021, file photo. This was an unprecedented offseason of goaltender movement around the NHL. Vegas traded Vezina Trophy winner Marc-Andre Fleury to Chicago. Finalist Philipp Grubauer couldn't agree to a deal with Colorado and signed with expansion Seattle in free agency. And those moves set off a domino effect that included 25 different goalies changing teams. (AP Photo/Ted S. Warren, File)

Marc-Andre Fleury was the face of the Golden Knights franchise, won the Vezina Trophy as the NHL's best goaltender and received assurances from Vegas owner Bill Foley that he'd retire there.

So, naturally, he was surprised to find out he'd been traded to Chicago.

“I know I don’t have many years left,” the 36-year-old Fleury said. “I thought I could end up there, maybe live there after hockey, too, so that’s why it’s a big change.”

Fleury to Chicago was far from the only goalie change during an unprecedented offseason of movement at the position. A total of 24 different veteran netminders switched teams, turning over more than a third of the available spots.

“More than a normal basis,” said fellow Vezina finalist Philipp Grubauer, who couldn't get a deal done with Colorado and signed in free agency with Seattle. “There's a shuffle. The salary cap doesn't help, so guys have to move and some contracts run out, too. I was actually surprised.”

Two Vezina finalists changed teams before the start of the following season for the first time since the NHL began presenting the award to one goalie in 1982. The third finalist, Tampa Bay's Andrei Vasilevskiy, isn't going anywhere after backstopping the Lightning to a second consecutive Stanley Cup championship.

Incredibly, the goalie he beat in the final almost moved in the aftermath of a spectacular run. Montreal exposed Carey Price in the expansion draft, but his contract scared off the Kraken, who took Florida's Chris Driedger and Washington's Vitek Vanecek instead.

The Capitals actually reacquired Vanecek, making him the only goalie to change teams twice this offseason. His agent prepared him for the possibility after Grubauer signed with Seattle.

“He told me: ‘Just wait. You can’t do anything,’” Vanecek said. "I was just waiting, and then they called me (at) 2 a.m., so they wake me up. I am traded back to Washington. After seven days, I was back.”

In a matter of two days, Braden Holtby got bought out by Vancouver and signed with Dallas. The Stars are his third team since winning the Stanley Cup with Washington in 2018.

Grubauer, who started that Capitals Cup run, was traded that offseason to the Avalanche and given an opportunity to be the starter. Helping Colorado reach the postseason three years in a row and win the Presidents' Trophy last season was not enough for the sides to come to an agreement: The Avalanche prioritized re-signing captain Gabriel Landeskog and hammering out a new contract for young defenseman Cale Makar.

It wasn't until the clock struck 6 p.m. back home in Germany and the free agent market opened that Grubauer thought he would not be back in Colorado. Of course, the trade of Fleury a day earlier made him realize anything was possible.

"Nobody’s safe, even if you win the Vezina," Grubauer said.

Vegas captain Mark Stone figured one of his team's big-money goalies would get traded. But instead of Robin Lehner, it was Fleury, three years removed from leading the Golden Knights to the final in their inaugural season.

Count Blackhawks winger Alex DeBrincat among the pleasantly surprised. “We’re happy we have him,” DeBrincat said of Fleury. “Hopefully we can do something good for him.”

Grubauer leaving led the Avalanche to acquire Darcy Kuemper from Arizona, one of a handful of teams that turned over its entire goalie tandem from last season.

The Sabres were as unable to re-sign Ullmark, let Carter Hutton leave for Arizona and turned to Aaron Dell and Craig Anderson for what could be a very long season in Buffalo.

Fleury going to Chicago opened a spot for longtime Winnipeg backup Laurent Brossoit to sign with Vegas. After bouncing around off the waiver wire the past couple of years, Eric Comrie finally gets a chance to show the Jets he can be the No. 2 behind 2020 Vezina winner Connor Hellebuyck.

After Vasilevskiy started 42 times during the 56-game regular season and 23 more in the playoffs, the Lightning upgraded behind him by signing 36-year-old Brian Elliott. Tampa Bay is Elliott's sixth different NHL team as he continues chasing the Stanley Cup.

“It's always good when a two-time Cup champion calls and wants you on their team, and it's really hard to say no to that,” Elliott said. “If any group can go for three in a row, it's this one.”