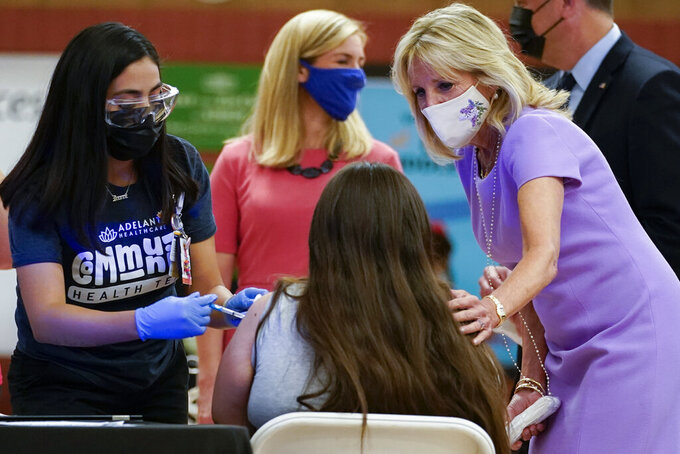 Carolyn Kaster, ASSOCIATED PRESS
FILE - First lady Jill Biden comforts a person as they get a COVID-19 vaccination during a tour of the site at Isaac Middle School in Phoenix, Wednesday, June 30, 2021. Arizona Attorney General Mark Brnovich said, Thursday, Nov. 4, 2021, that he plans to sue to block the Biden administration's new mandate that large employers require their workers to either be vaccinated for COVID-19 or undergo weekly testing starting in January. (AP Photo/Carolyn Kaster, Pool, File)

PHOENIX (AP) — Arizona Attorney General Mark Brnovich said Thursday he plans to sue to block the Biden administration’s new mandate that large employers require their workers to either be vaccinated for COVID-19 or undergo weekly testing starting in January.

The Republican said the suit challenging the new Occupational Safety and Health Administration regulations targeting employers with 100 or more workers would be filed Friday.

“When faceless government bureaucrats dictate what you must inject into your body, that’s the furthest thing in the world from a safe workplace,” Brnovich said in a statement. “The government doesn’t get to be your nanny, and it’s certainly not your doctor.”

“This is a direct attack on not just personal liberty but also the very businesses - large and small - that keep our state, country and economy running,” Ducey said in a statement. “After the difficulties that COVID-19 has posed for individuals, businesses and the current workforce shortages, the administration should be assisting with getting them back on their feet rather than imposing more regulatory burdens.”

Ducey said the rule was adopted without public input and said that was akin to taxation without representation.

In a background briefing on the new rules Wednesday evening, a senior Biden administration official said they were needed to ensure worker safety.

“A virus that has killed more than 745,000 Americans, with more than 70,000 new cases per day currently, is clearly a health hazard that poses a grave danger to workers,” the official said.

U.S. Rep. Raul Grijalva, a Democrat who represents parts of southern Arizona, called the regulations “welcome news" that will save lives and prevent losses by businesses that experience COVID-19 outbreaks among their workforces,

“With COVID-19 as the new leading cause of death in Arizona, I applaud this effort to mitigate transmission of the virus in the workplace,” Grijalva said in a statement. “Right now, people are uncomfortable risking themselves or their families to be in unsafe working conditions – and that must change.”

Arizona is already facing issues over how it oversees workplace safety. Last month, the Biden administration threatened to revoke the authority of Arizona and two other Republican-controlled states to handle their own workplace safety enforcement because they have refused to adopt rules to protect health care workers from COVID-19.

The lawsuit will be the second filed by Brnovich, who is seeking his party’s 2022 U.S. Senate nomination, over federal vaccine or testing mandates. A suit he filed in September alleged the government was violating the Constitution’s equal protection clause because it is treating citizens differently than people caught crossing the U.S.-Mexico border illegally. Those people are offered vaccines but not required to be inoculated.

A hearing on Brnovich’s request for a preliminary injunction in that case is set for next week.

— The Arizona Department of Health Services on Thursday reported an additional 3,352 new confirmed COVID-19 cases and 17 more deaths, increasing the state’s totals to 1,179,072 cases and 21,290 deaths since the pandemic began.

According to Johns Hopkins University data, Arizona's seven-day rolling average of daily new cases has risen over the past two weeks from 2,131 per day on Oct. 19 to 2,684 new cases on Nov. 2.

The rolling average of daily deaths has risen over the past two weeks from 39 per day on Oct. 19 to 40 per day on Nov. 2.

— The Pinal County Board of Supervisors reversed itself and narrowly voted to accept a $3.3 million federal grant to help provide COVID-19 vaccines to underserved populations in the semi-rural county in south-central Arizona, the Casa Grande Dispatch reported.

The board voted 3-2 on Wednesday to accept the grant, with Supervisor Jeffrey McClure reversing his earlier vote on Sept. 1 against accepting the grant. A request by McClure for reconsideration prompted the re-vote on Wednesday.

Supervisor Kevin Cavanaugh again voted against accepting the grant, saying “it’s a waste of money to hire a vaccine equity coordinator … when we could do this much better on a local level.”