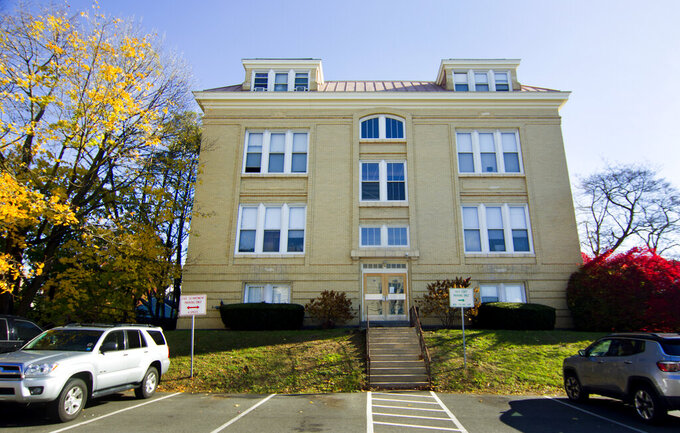 Christian Abraham, ASSOCIATED PRESS
A view of the Greenwich Communities building across the street from the Greenwich Police Department in Greenwich, Conn., Friday Nov. 19, 2021. An arrest has been made in a 1986 homicide of an infant boy linked to the property. (Christian Abraham/Hearst Connecticut Media via AP)

A woman who lived a seemingly quiet, normal life with her family in Florida for three decades was charged with murder Friday in connection with the 1986 killing of her infant son in Connecticut, according to police and her lawyer.

Greenwich police said new DNA testing linked Janita Phillips to the crime scene and she later admitted during an interview with detectives that she was the baby's mother and caused his death.

Phillips, 62, of Lake Mary, Florida, surrendered to Greenwich police Friday morning, police said. She initially was detained on $50,000 bail but was released without bail following a court arraignment. Her next court date is Jan. 26.

Prosecutor Paul Ferencek did not oppose releasing Phillips without bail, saying she has no previous criminal record and was not considered a flight risk.

The newborn child, named Baby John by police, was found dead in a garbage truck on May 16, 1986, after it had emptied a dumpster at an apartment building in Greenwich where Phillips lived at the time, authorities said. The chief medical examiner’s office determined the baby was strangled shortly after being born and ruled his death a homicide.

“We are grateful that justice is finally being obtained for this infant child of our community,” Deputy Police Chief Robert Berry said in a statement. “The investigation of his tragic death has taken many long years, but he has always been remembered and we hope this conclusion will bring him peace and recognition.”

Phillips' lawyer, Lindy Urso, said the defense will contest the murder charge and Phillips will plead not guilty at a later court date.

Urso said he has not seen the evidence yet, but he questioned how the medical examiner could conclude the child's death was a homicide. He said it was possible the baby was strangled by the umbilical cord.

“Obviously it's a tragic situation," Urso said in a phone interview Friday. “She’s been dealing with this grief for 35 years.”

Phillips moved to Florida shortly after the baby's death, police said. She lives with her husband and has two children and a stepchild who are all adults, Urso said. He said she has been working in the insurance industry and “just living a completely quiet, normal life.”

During the investigation in 1986, police said they found items soaked with blood and other evidence at the crime scene, and they interviewed residents of the apartment building. But nothing positively identified the killer.

Police asked Phillips in 1986 to provide a blood sample for testing and she agreed, but later canceled the appointment, according to an arrest warrant affidavit released Friday.

Police developed information that Phillips was living in Florida and took items out of the trash and recycling at her home in June 2020 for DNA testing, the affidavit says. That testing showed Phillips and her husband were the parents of the infant, police said.

Phillips told police she hid the pregnancy from her husband and other relatives after he said he did not want a second child, the affidavit says. Police said her husband did not know about the baby's death and had no involvement.

In September, Greenwich detectives including Christy Girard went to Florida and interviewed Phillips with help from the Seminole County Sheriff's Office, police said. An arrest warrant charging her with murder was issued Wednesday.

This story corrects the spelling of Phillips' last name.