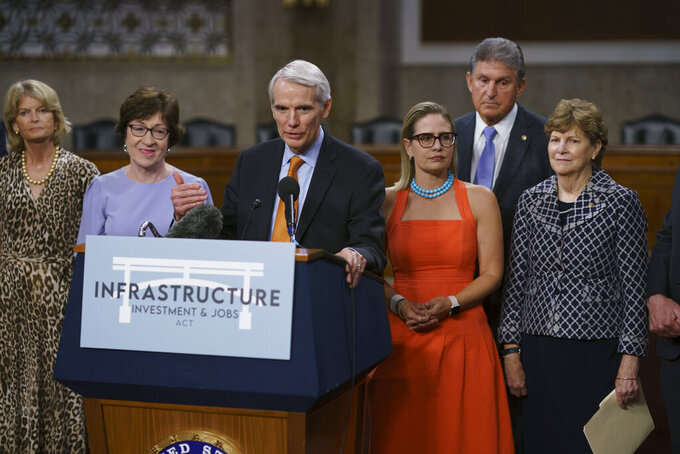 WASHINGTON (AP) — For President Joe Biden and the senators laboring over a nearly $1 trillion infrastructure package, there’s just one question left: Can enough Republicans get to yes?

Seventeen GOP senators joined all Democrats in voting this week to start the debate, launching what will be a dayslong process to consider the bill. The 67-32 vote was a surprisingly strong bipartisan showing, a rarity these days in the narrowly split Congress.

But whether the number of Republican senators willing to pass a key part of Biden's agenda grows or shrinks in the days ahead will determine if the president's signature issue can make it across the finish line.

Sen. Rob Portman of Ohio, the lead Republican negotiator, predicts support will only swell ahead of final votes.

“That’s pretty darn good for a start,” Portman said after Wednesday’s outcome. “We can build on that as members begin to realize the impact of these projects on their states and the people they represent.”

For Republican senators weighing their options, there are plenty of reasons to stick with no.

The bipartisan Biden plan is big, with $550 billion in new spending beyond the typical highway and public works accounts. It’s being financed from funding sources that may not pass muster with deficit hawks, including repurposing untapped COVID-19 relief aid and relying on projected future economic growth.

Besides, GOP opponents of Biden's plan argue, passing this first part of the White House's infrastructure agenda almost certainly helps pave the way for Democrats to pass a much bigger $3.5 trillion package on child care, health care and other far-reaching proposals that Republicans staunchly oppose. They call that plan a “reckless spending spree," but can do little to stop it under special budget rules that won't require the 60-vote threshold that will be needed to advance the bipartisan package over a filibuster in the evenly split 50-50 Senate.

Sen. James Lankford, R-Okla., who voted against launching debate this week, seems inclined to oppose the bipartisan package, even as he acknowledged the potential popularity of new roads, bridges, broadband internet and other infrastructure spending.

“That's always the challenge,” Lankford said Thursday. “People always say, ‘We want more.’ But when you say, ‘How do we pay for it?’, they’ll often say, ‘Yeah, we need to make sure it’s paid for as well.’”

Yet some Republicans say it’s time to say yes.

After voting against Biden's $1.9 trillion COVID-19 relief aid bill earlier this year and preparing to vote against the next big infrastructure package on deck, some Republicans worry about ending the first year of his presidency almost empty handed.

“It feels like you’re against everything,” said Sen. Kevin Cramer, R-N.D., who was among the 17 voting to start work on the bill. “And I think that’s how it looks.”

Infrastructure is a topic that has typically generated bipartisan support, and senators are hearing from mayors and other local officials about the need for federal investments in the big-ticket public works items that cities, counties and states cannot typically afford on their own.

Included in a 57-page summary distributed to the Republican senators about the bipartisan plan were polling results, including a recent survey from The Associated Press-NORC showing 8 in 10 Americans support some infrastructure spending.

While Senate Republican leader Mitch McConnell has been open about his plan to be “100% focused” on stopping Biden’s agenda, he also knows other GOP senators wouldn’t mind having something to show voters back home.

The political calculation among the Republicans played out in a closed-door lunch meeting this week, when one side argued that a yes vote would only help Biden and Democrats push their big spending plans forward.

Their arguments against the bill echoed a statement from Donald Trump, the former president, who called Republicans derisive nicknames for working with Democrats. Trump encouraged Republicans to wait and try to pass their own bill if they regain the Senate majority in next fall's midterm elections.

Cramer said he stood up in the lunch meeting and told his colleagues that if they kept at it, neither Democrats nor Republicans would ever end up supporting the other side, and nothing would ever get done.

“There can be winners and winners,“ he said. “Not every transaction in this place requires there to be a loser for there to be a winner.”

One Republican strategist who spoke on condition of anonymity to discuss the private thinking said more senators are expected to get to yes.

The strategist said GOP senators are weighing the idea that a yes vote could be seen as a political win, showing they worked to support the bipartisan infrastructure plan. They could then shift attention to Democrats, who face their own internal divisions as they try to carry Biden's proposals to final passage.

McConnell signaled the GOP's political strategy at work as he joined those voting to start the debate but quickly blasted Democrats for their big spending plans.

"Our country would benefit a whole lot from some targeted investment," McConnell said Thursday. "The kind of focused compromise that our colleagues have been hashing out could not contrast more sharply with the multitrillion-dollar reckless taxing and spending spree that Democrats hope to ram through on a party-line vote later this year.”

Biden has been an integral partner in the debate, drawing senators close with one-on-one meetings at the White House, while giving the lawmakers space to negotiate with one another and work out the contours of the bipartisan bill.

The process has been long, tedious and full of starts and stops that made a deal seem out of reach. It has been more than a month since Biden and the senators first struck an accord to get this far, with this week’s floor votes in the Senate. And there are still days to go.

“I think it’s an important statement for Republicans to come together with us, but we are clear that we are going to make these investments in our economy, because those are investments in the American people," said Rep. Katherine Clark, D-Mass., the assistant speaker. "And we hope the Republicans will join us, but that will be our outcome, whether they decide to be on the side of the American people or not.”