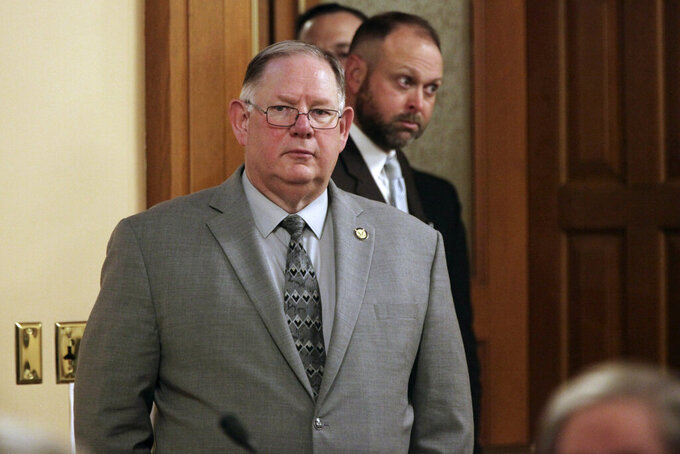 John Hanna, ASSOCIATED PRESS
Kansas House Majority Leader Dan Hawkins, R-Wichita, watches negotiations between his chamber and the Senate over legislation aimed at financially protecting workers who refuse to comply with federal mandates to get COVID-19 vaccines, Monday, Nov. 22, 2021, at the Statehouse in Topeka, Kan. Republican lawmakers want to make it easy for workers to claim religious exemptions from the mandates. (AP Photo/John Hanna)

Gov. Laura Kelly said she would sign the bill, angering some fellow Democrats in the GOP-controlled Legislature. Most Democratic lawmakers opposed it, arguing that it was a symbolic measure that won't provide any real protections for workers who refuse to get vaccinated in the face of federal mandates imposed by President Joe Biden.

The bill would require employers to grant a religious exemption to COVID-19 vaccine mandates for any worker who seeks one in writing, without second-guessing that employee. Republican leaders initially were divided over whether it was necessary to also promise fired workers unemployment, but House leaders who'd resisted came around during negotiations with the Senate.

The votes were 24-11 in the Senate and 77-34 in the House. Republican legislators had forced Kelly to call the one-day special session to consider ways for Kansas to push back against Biden's mandates. The full Legislature had been out of session since May and wasn’t set to reconvene until January, but many GOP lawmakers believed that vaccine-refusing workers couldn’t wait for help until then.

“Many of us here tonight wanted a lot more, but this is a victory for liberty and the patriots standing tall across Kansas,” said Sen. Mike Thompson, a conservative Republican from the Kansas City suburb of Shawnee.

During negotiations between Monday evening between the House and Senate, GOP senators dropped a proposal from conservatives in their chamber to prohibit private employers from imposing their own vaccine requirements, whether or not Biden's mandates survive the federal lawsuits challenging them. Attorney General Derek Schmidt, a Republican seeking to oust Kelly in next year's governor's race, has brought Kansas into three multi-state lawsuits.

“We have to stay focused on the priority, which is protecting those people right now that could be losing their jobs,” said Senate President Ty Masterson, an Andover Republican and one of the negotiators.

Republicans hold supermajorities in both chambers, but a few GOP lawmakers joined most Democrats in voting against the measure. Rep. Vic Miller, a Topeka Democrat who was among the negotiators, called it a “sham" that will mislead vaccine-resistant workers who want some protection from Biden's policies.

Kansas’ special legislative session comes as Republican governors, state attorneys general and lawmakers are pursuing ways to push back against the Biden mandates. Iowa enacted a law last month extending unemployment benefits to workers who refuse to get vaccinated, and provisions in the Kansas legislation were inspired by measures enacted last week in Florida.

One question is whether such state laws can be enforced because federal law is supreme.

Supporters argued that the Kansas measure would stand because it wouldn’t conflict with Biden’s mandates, which allow for religious exemptions. But some business owners and the Kansas Chamber of Commerce, often influential with Republicans, were skeptical. They worried that businesses would be caught between conflicting state and federal mandates.

“You’re going to make a wrong decision, no matter what,” said Alan Rupe, a Wichita attorney who represents companies in employment law cases.

The Kansas chamber also opposed provisions that said if employers don't grant a religious exemption to workers who ask for them, they could be fined up to $50,000 per violation.

“What business owner wants to raise their hand in the air and say, ‘Fine me’?” said Eric Stafford, a chamber lobbyist.

Meanwhile, Republicans faced pressure from anti-mandate activists to prohibit mandates from private employers. However, the House did not consider the idea, and Masterson said it could get a full vetting starting in January.

Evon Smith, a registered nurse who left her job in Topeka in October because she didn't think she would get a religious exemption, said it’s important to hold employers accountable. She was at the Statehouse on Monday.

“I should be able to state that I don’t want this shot because of God," she said. "That should be the end of it.”

The measure says religious exemptions would cover beliefs that aren’t tied to a belief in God but simply a strong moral objection.