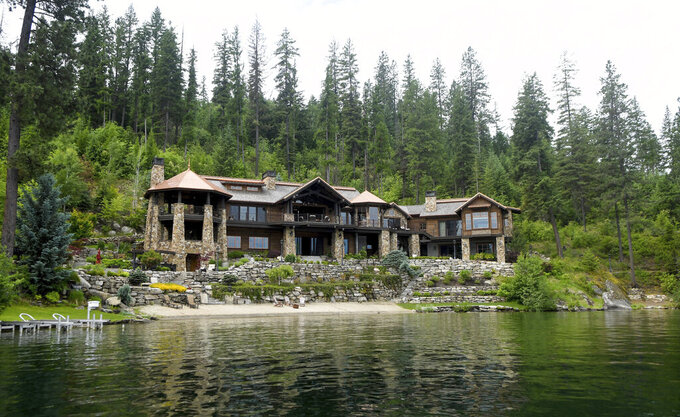 Kathy Plonka, ASSOCIATED PRESS
This $27 million lakefront mansion in Coeur d'Alene is photographed on Wednesday, June 23, 2021. The Spokane real estate market is booming. Spokane County's median home price in May 2021 reached another all-time high at $375,000. That was 29.5% greater than the $289,900 median in May 2020, according to the Spokane Association of Realtors. (Kathy Plonka/The Spokesman-Review via AP)

SPOKANE, Wash. (AP) — The way Darin Watkins sees it, the real estate boom in the once-sleepy Spokane, Washington, metropolitan area is a numbers problem. Far too many people are moving in, far too few homes are being built and prices have skyrocketed.

Half of renters in Spokane County want to buy a house, but they can’t find one, said Watkins, government affairs director for the Spokane Association of Realtors.

“We’re at the lowest level of inventory in the history of Spokane County,” he said.

In May, the Wall Street Journal/realtor.com Emerging Housing Markets Index ranked Coeur d'Alene, Idaho, part of this combined metropolitan statistical area, as having the fastest-rising home prices in the nation. Spokane County came in at No. 5.

It's an astonishing development in an area that had long languished behind the glitter of the booming Seattle area. It illustrates how many people are moving out of crowded coastal cities seeking cheaper land and an easier lifestyle in secondary cities, Watkins said.

The COVID-19 pandemic only accelerated the trend as millions of people found they could work effectively from home without going to an office. “There are a lot of portable jobs,” Watkins said.

The phenomenon has also led to housing booms in other cities in the inland West, such as Bozeman, Montana, and Boise, Idaho.

High prices may pose little problem for people selling million-dollar homes in California and moving north, but it's a major issue for homebuyers stuck in low-wage cities like Spokane and Coeur d'Alene, Watkins said.

The high prices have also put pressure on the rental market, leaving the area with a vacancy rate of less than 1%, according to the University of Washington’s Center for Real Estate Research. In King County, which includes Seattle, the vacancy rate was 7.1% of apartments.

As a result, rental costs have also skyrocketed.

“It creates a two-caste system,” Watkins said of the rising housing costs. “The haves are happy with their home equity growth.”

But for lower-income people, “their costs keep going up,” he said.

Ben Stuckart, executive director of the Spokane Low-Income Housing Consortium, has called on the city of Spokane to declare a housing state of emergency.

On the other end of the spectrum, Coeur d’Alene, built along the shores of a beautiful lake, has boomed as a destination for the rich and famous, and well-off retirees. A custom luxury estate just steps away from Lake Coeur d’Alene is currently on the market for $27 million, making it the most expensive home listed in Idaho.

But it's not all rich people drawn to the region. Amazon has added about 4,000 jobs in the Spokane area in the past year, and it plans to add 1,000 more. Other employers are also expanding. But many jobs don't pay well enough to afford a home, Watkins said.

An issue is Washington state laws that sought to limit urban sprawl by concentrating housing largely within existing boundaries, Watkins said. Those laws were enacted three decades ago as the population of the Seattle area surged thanks to the high-tech boom.

Those laws need to be revisited so builders can start erecting needed homes, Watkins said.

The Spokane-Coeur d'Alene area has more than 745,000 residents and is ranked 71st among combined metro areas in the nation, between Lexington, Kentucky, and Syracuse, New York. The population is expected to continue growing in the metro area in the next decade.

Grant Forsyth, the chief economist for Avista, the region's primary electrical utility, pointed to a lack of home construction since the recession of 2008 as a major contributor to the rising home prices. He also cited very low interest rates and a pandemic-spawned desire among people to own their own homes.

He noted the United States as a whole is barely growing in population, at less than half a percent a year. But Spokane is growing at 1% and Coeur d'Alene about 2% per year.

“Compared to the rest of the U.S., we are growing quite rapidly,” Forsyth said.