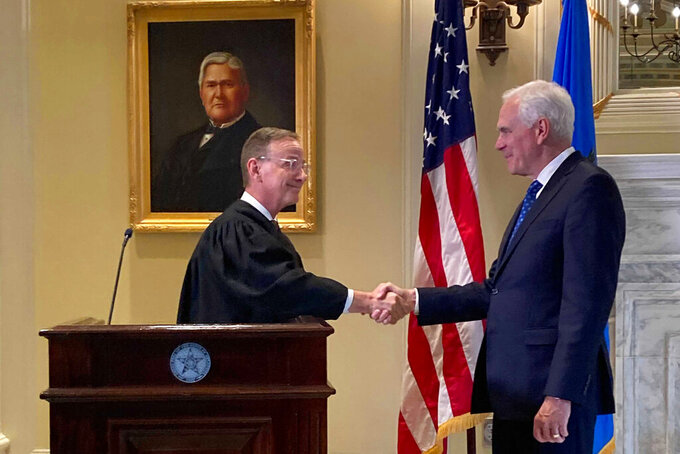 OKLAHOMA CITY (AP) — A Tulsa attorney whom the American Bar Association rated as “ not qualified " to serve as a federal judge was tapped Friday by Oklahoma Gov. Kevin Stitt to serve as the state's next attorney general.

After a two-month search that began in May after Republican Mike Hunter stepped down suddenly, Stitt selected John O'Connor, 66, to fill the vacancy, giving the governor an ally in his increasingly contentious relationship with some of the Native American tribes in the state. Stitt and Hunter, both Republicans, occasionally clashed on various matters, including over Stitt’s decision to renegotiate the state’s gaming compacts with Native American tribes.

“It was so important to me to find someone who was highly competent in the law, but more importantly, I was looking for someone with high moral character who will do the right things for the right reasons and never for personal gain," Stitt said after announcing his pick in Tulsa.

“As the state’s top law enforcer, we needed someone willing to fight and defend what’s best for all 4 million Oklahomans."

O’Connor was formally sworn into office Friday afternoon by Oklahoma Supreme Court Justice John Kane during a ceremony at the state Capitol.

Stitt said he's known O'Connor for more than 20 years and considers him a “mentor" who helped advise him when Stitt was CEO of a mortgage company.

O'Connor will have to run for the seat in a statewide election in 2022, and he indicated Tuesday that he “absolutely" plans to do so.

“I want to get in there, get my hands dirty, and I’m sure it will take longer than 16 months," O'Connor said.

O'Connor clearly sides with the governor in his opposition to the U.S. Supreme Court's ruling last year in McGirt v. Oklahoma that a large swath of eastern Oklahoma remains an Indian reservation. He said he hopes the high court reverses its position in the landmark tribal sovereignty case.

“We need to limit McGirt, if it’s not going to be overturned, to the prosecution of major federal crimes in federal court," O'Connor said, voicing concern that the opinion in the case was written in a way that could potentially expand tribal sovereignty beyond criminal jurisdiction.

At least one Republican challenger, Tulsa attorney Gentner Drummond, has filed paperwork indicating he plans to seek the post. Drummond lost to Hunter in a GOP primary in 2018 by fewer than 300 votes and said Friday he was undeterred by the governor’s pick.

“While I respect his authority to appoint a candidate of his choosing, my passion to serve as the next elected attorney general remains undaunted,” Drummond said in a statement.

O'Connor, an attorney with the Oklahoma-based firm Hall Estill, was nominated for a federal judgeship in 2018 by former President Donald Trump, but failed to advance past a Senate panel after the American Bar Association unanimously rated him not qualified to serve. In a letter to the Senate Judiciary Committee, the then head of the association's Standing Committee on the Federal Judiciary, Paul Moxley, said O'Connor's unanimous rating was on the basis of “integrity and professional competence."

In the September 2018 letter, Moxley said Tulsa-area attorneys questioned by the panel stated that O'Connor lacked trial experience and questioned his fitness to perform as a judge.

O'Connor “does not have experience trying jury cases in any court, has not appeared often in federal court in any capacity, and has no discernable criminal experience," Moxley wrote.

Attorneys also indicated O'Connor's requests for legal fees in a number of cases were excessive, and at least two complaints were made to the Oklahoma Bar Association about O'Connor charging excessive fees and not being truthful.

“Attorneys who had direct professional dealings with the nominee cited other examples of his dishonesty and disregard of ethical and professional obligations," Moxley wrote.

When asked Friday to respond to the American Bar Association’s findings, O’Connor responded: “I’m happy to address that question,” before walking away from a reporter and into the governor’s office.

A spokesman for the Attorney General's Office, Alex Gerszewski, later said in a statement that the ABA has a history of bias against conservative appointees to the bench.

“The last two Republican presidents opted out of the private trade group's assistance in evaluating candidates because of their liberal positions," Gerszewski said.

Stitt, through a spokesman, referred to the national group's 15-member panel that unanimously voted for O'Connor's rating as an “out-of-state, liberal special interest group" and said he had “zero concerns" about their opinion.