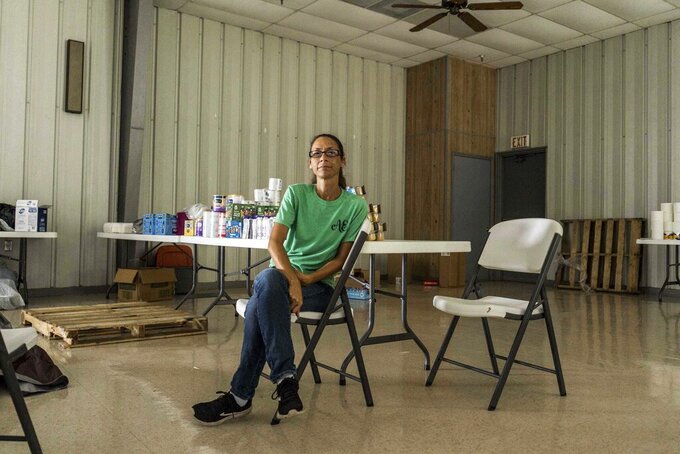 TERREBONNE, La. (AP) — A patchwork of grassroots and government efforts are working to help members of one local Native American tribe recover after Hurricane Ida.

Chief Shirell Parfait-Dardar says the homes of almost all of the Grand Caillou-Dulac Band of Biloxi-Chitimacha-Choctaw’s members sustained damage from the Category 4 storm.

She has set up shop with other tribal members and nonprofits to help bring resources and services to the community at the American Legion hall in Chauvin and Anchor Foursquare Church in Dulac.

More than a month after the storm, Parfait-Dardar has collaborated with grassroots organizations and other volunteers to fill in the gaps. Tribal members and other residents in Terrebonne’s hard-hit bayou communities need help applying for FEMA aid and temporary housing and, in the longer-term, rebuilding with more resiliency.

“We can’t do temporary fixes,” Parfait-Dardar said. “If we don’t take a more proactive approach we’re not going to make the next one.”

Parfait-Dardar’s own heavily damaged home is uninsured because it wasn’t complete when the storm hit. She has applied for grants and worked with other coastal tribes and groups, including the nonprofit Lowlander Center, to receive funding that would help residents rebuild homes designed to withstand a Category 5 storm.

One student, Emily Torrey, said the process has been muddled by barriers. She has one example where a resident was not able to process a FEMA claim because the number on file goes to a phone that was damaged by the storm. The students plan to return next week.

“We’re going to assist in between as much as we possibly can,” Parfait-Dardar said. “I got a whole list of people that I still need to reach out and thank for all of their advocacy, for their love and for their support.”

Most tribal members have been displaced, and Parfait-Dardar said she is frustrated by the slow action from FEMA and the state to serve residents. It’s been over 40 days and the first tent base camps for displaced residents have arrived around Terrebonne Parish.

The first, for Chauvin area residents, opened Oct. 8 along Klondyke Road and can handle up to 100 people.

Parish officials have said about 5,000 Terrebonne households have applied for temporary housing since the storm. More tent camps are expected to open over the coming week throughout the parish.

“These programs have been here for too long for them to still be this ineffective,” Parfait-Dardar said.

She’s continuing to talk with state and parish officials about the tribe’s needs, adding that tribal communities know their situation and the best ways to recover.

“We’re making progress, advocating for the people we serve,” Parfait-Dardar said. “It takes the entire community to recover.”