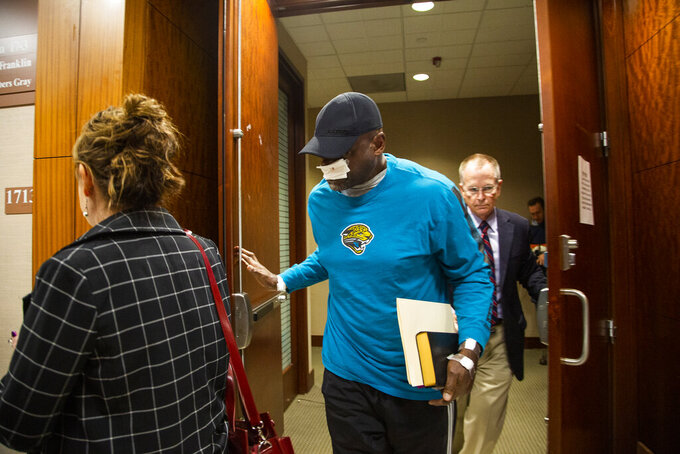 Marie D. De Jesús, ASSOCIATED PRESS
FILE - Former Houston police officer Gerald Goines, center, exits the 338th District Criminal Court on Jan. 9, 2020, in Houston. A judge said Thursday, July 21, 2022, that a man who has been serving a 25-year prison sentence based mostly on testimony from the ex-Houston police officer whose cases are being reviewed following a 2019 deadly drug raid should have his conviction overturned. (Marie D. De Jesús/Houston Chronicle via AP, File)

HOUSTON (AP) — A man who has been serving a 25-year prison sentence based mostly on testimony from an ex-Houston police officer whose cases are being reviewed following a 2019 deadly drug raid should have his conviction overturned, a judge said Thursday.

Frederick Jeffery was convicted in April 2018 for possessing methamphetamine based mostly on evidence and testimony from former Houston officer Gerald Goines, according to prosecutors.

Goines has been charged with murder and is facing other counts in state and federal court in connection with a deadly raid that he led in January 2019 in which Dennis Tuttle, 59, and his wife, Rhogena Nicholas, 58, were killed. The families of Tuttle and Nicholas filed federal civil rights lawsuits against the city and 13 officers.

Prosecutors allege Goines lied to obtain the warrant to search the couple’s home by claiming a confidential informant had bought heroin there. Goines later said there was no informant and that he bought the drugs himself, they allege. Police found small amounts of marijuana and cocaine in the house, but no heroin.

In Jeffery’s case, prosecutors allege Goines also lied to obtain a search warrant that allowed officers to go into a home where Jeffery was arrested.

A confidential informant later told investigators she never bought cocaine at one of the homes tied to the search warrant in Jeffery’s case and that she and Goines had started doing things “the wrong way” several years earlier and she would get paid for some drug buys she never made, according to court documents.

Prosecutors also allege Goines testified at trial that he was told by Jeffery that he had a phone inside the home and when Goines went to retrieve it, he found drugs next to the phone. Authorities allege Goines lied about having this conversation with Jeffery regarding the phone.

“I think what all this shows is he and others were really engaged in a pattern of fictitious buys, perjured warrants and straight up graft,” said Josh Reiss, chief of the Post-Conviction Writs Division of the Harris County District Attorney’s office.

Prosecutors said Thursday Jeffery’s case was the fifth one related to Goines’ work they have recommended that the conviction be overturned.

Associate Judge Stacy Allen agreed with prosecutors and following a court hearing on Thursday, she signed an order saying that Jeffery should have his conviction overturned. The order was forwarded to the Texas Court of Criminal Appeals, which will make the final decision.

“Confidence in the criminal justice system cannot tolerate such behavior,” Allen said in her 19-page order.

In a March letter to the judge in his case, Jeffery wrote that he was “fighting for my freedom for a crime I didn't commit."

Patrick McCann, Jeffery’s attorney, said he was overjoyed by the judge’s order as his client was “in custody for far too long” because of false testimony against him.

McCann said he was working to have Jeffery, who had been transferred from state prison to the Harris County Jail in Houston for Thursday’s court hearing, freed on bond while the appeals court issues its ruling.

“I hope it’s an example of the system working correctly and catching a bad case and turning it around,” McCann said.

“There is NO evidence beyond wishful thinking and conjecture that there was anything wrong with the conviction the DA’s office is issuing press releases about,” DeBorde said in an email.

In a January affidavit, Goines declined to answer questions about Jeffery’s case, asserting his Fifth Amendment right against self-incrimination.

A dozen officers tied to the narcotics squad were indicted following the 2019 deadly raid. Most of the officers face charges related to the alleged overtime scheme, allegations of falsifying documentation about drug payments to confidential informants or for allegedly lying on police reports.

After the raid, prosecutors sent out 1,405 letters to individuals whose convictions were tied in some way to Goines.