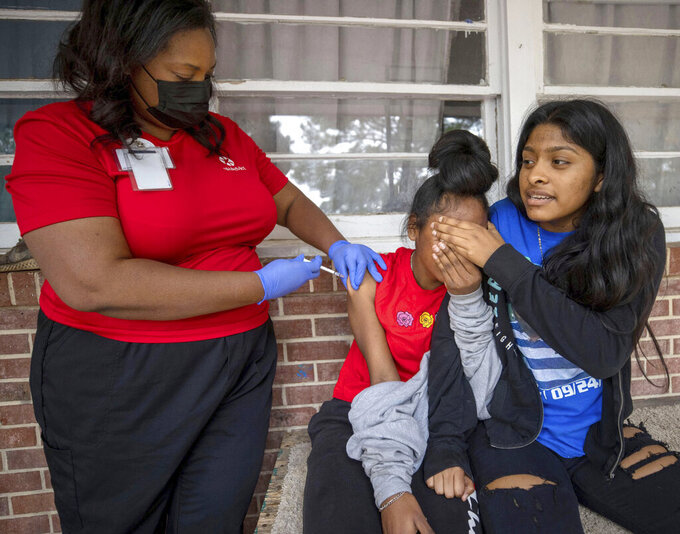 RALEIGH, N.C. (AP) — Before they became known as the Sister Circle and appeared on the “CBS Evening News,” the six African-American doctors were friends and colleagues at WakeMed in Raleigh.

Their conversations became more frequent and pointed last year, as the COVID-19 pandemic highlighted disparities in health care for Black people and other people of color. The murder of George Floyd spurred a wider reckoning with racial inequality.

The doctors — two family physicians, two OB-GYNs, a pediatrician and a psychiatrist — talked of their own experiences, as Black women working in a white- and often male-dominated field, and of what they were seeing in their practices. People of color were less able to avoid the coronavirus and more likely to get sick and die of COVID-19.

And as vaccines became available, the doctors suspected, correctly, that people of color and marginalized communities would be less likely to receive them, either because of a distrust of the science or because they were disconnected from the health care system.

The doctors talked about what they could do to help. It started with posting photos of themselves getting vaccinated on social media in December 2020 to encourage other Black residents to get vaccinated, too.

“Just a simple thing like that, being a model to people,” says Dr. Netasha McLawhorn, an OB-GYN. “We were figuring that we’re African-American doctors, and if other African-Americans see us maybe they would trust us and do it, too.”

Dr. Rasheeda Monroe, a pediatrician, then volunteered to help with one of WakeMed’s first drive-thru vaccination events at its main campus in Raleigh. It was exciting to finally be able to protect people from the virus, Monroe says, but something was wrong: Almost everyone who came through the line was white.

“And it struck me,” she says. “I said, ’Man, here we are in 27610, which is seen as one of the hardest hit ZIP codes in the entire state, which is 65% Black, and we are a hospital system situated in that ZIP code, giving shots out in that ZIP code, and that is not reflected in the people getting vaccinated through our efforts.”

Monroe talked it over with her five colleagues, and they agreed that the big problem was that WakeMed, like other hospital systems, was signing up existing patients through their online accounts, something the elderly residents of 27610 were less likely to have.

“That’s when we said, ‘Hey, let’s change the strategy. Let’s bring vaccine to people,’” Monroe says. “Reach out to where people who lack access are, through the leaders who they trust.”

WakeMed agreed to provide vaccine if the doctors could find 300 people willing to be vaccinated. With the help of the Wake County Public Health Department, they began reaching out to pastors at Black churches and members of historically Black sororities and other organizations. Within 48 hours, Monroe had more than 700 sign-up forms in her inbox.

And the forms kept coming. Each weekend through the winter, the doctors and the county health department worked to line up churches where they could administer the vaccines and the hundreds of volunteers and other health care workers needed to help.

Because of their work to get people vaccinated against COVID-19, the doctors of the Sister Circle are The News & Observer’s Tar Heels of the Month, which honors people who have made significant contributions to North Carolina, the region and beyond.

The doctors’ involvement in the vaccination efforts “meant everything,” said Lechelle Wardell, the community outreach and engagement manager for the county health department.

“We would not have been able to get folks vaccinated at the rate that we did without their help,” Wardell says. “And without them saying, ‘We’re concerned that Black and brown folks aren’t having the same kind of access, and we’ve got to get out into the community and take it to them.’”

The six doctors administered many of the vaccines themselves, which helped people feel more comfortable, Wardell says.

“One, it’s a medical expert, and people trust their doctors,” she says. “And two, they look like them. It was folks from our own community that were out there giving them their shots.”

THE SISTER CIRCLE IS BORN

A few weeks into the vaccination effort, ABC11 aired a story about the doctors. In it, Monroe refers to the group as the “sister circle,” a phrase that they had casually used to refer to themselves.

The name was repeated nationwide when “CBS Evening News” aired its segment on the doctors in March.

“It’s not like we dubbed ourselves this group of vaccinating heroes and called ourselves the ‘Sister Circle,’” Monroe says. “But it just kind of stuck, and it had a ring to it, so that’s how people started referring to us.”

“It denotes the warm relationship that we have,” Benoit-Wilson says. “A supportive relationship.”

By late spring, the COVID-19 vaccines were more widely available at pharmacies and physicians’ offices, and supplies were plentiful. There was less need for the mass vaccination events at churches and community centers.

By then, the Sister Circle had organized dozens of clinics and administered 14,000 doses of vaccine.

But the pandemic wasn’t over. The number of people who had gotten vaccinated plateaued in the summer. Then the more contagious delta variant of the coronavirus hit, creating new urgency to reach the people who remained unvaccinated.

But the strategy had changed. Rather than mass events, the doctors were doing more speaking than giving shots. They served on panels and met with small groups, trying to reach people who were less eager to get the shot.

“You’re talking to a group of five people, 10 people, and you’re really able to spend a half an hour discussing their concerns and listening to their experiences,” Benoit-Wilson says. “I think that’s where some of that change starts, and that’s where we’ve been focusing.”

The doctors are regulars on the Wake County Public Health Department’s Ask the Doc virtual town hall meetings about COVID-19. Wardell says she often turns to the Sister Circle for other engagements as well.

“When I get speaking requests or somebody wants a trusted messenger to speak to their group of parents or their community group, I send out an email to those ladies,” she says. “And inevitably one of them says, ‘I can do it. I’ll take it on.’”

The Sister Circle had another mass vaccination event in late October, this time to arrange booster shots for 600 seniors they inoculated last winter.

But Price has continued to vaccinate people in person, by visiting home-bound seniors and others on her own or through a Wake County program called Doses to Doors.

As her workday ended one Friday this month, Price drove to the home of Emily Gutierrez to give the 15-year-old Broughton High School student a second dose of the Pfizer vaccine. Price had given Emily her first shot at the home of a relative three weeks earlier. The teen was the first in her immediate family to get vaccinated.

“So you’re the hero in the family,” Price told her. “Because I know that they’re watching to see what happens.”

As Emily waited for her shot on the porch of their apartment, she was joined by her 13-year-old sister, Eily. Their mother, Vanessa, was inside.

Eily, an eighth-grader at Moore Square Middle School, said her mother wanted her to get her first dose of the vaccine but that she didn’t want it.

“I think it’s going to hurt,” she said, “because every time they put a needle in me, I move my hand like this.”

“Ah, so like right before they give you the stick, you move?” Price said. “But if I did it so fast, you wouldn’t have a chance. I’m serious. Watch me with your sister, and then we’ll re-discuss. And it’s OK either way.”

Eily relented, mostly because her mother insisted. Eily and Emily both covered Eily’s eyes with their hands as Price quickly stuck the needle in.

Price said she’d be back to give Eily her second dose. But Argenis said another day of the week would work better, and they settled on the following Wednesday evening. By then, Vanessa Gutierrez had joined them on the porch, and Price asked if she wanted to get vaccinated, too.

Speaking through an interpreter, Vanessa said she had heard the vaccine might have long-term side effects, and that worried her. Price turned to the couple and said she couldn’t say what the future will bring.

“But what we do know is what the present disease, COVID, can do, and it’s been killing people. It’s been making normal, healthy-looking people sick,” Price said. “So I think a lot of times we have fears with new things, and I understand that. But I can only know what I know now, and what I know now is that the disease seems to be a lot worse than this vaccine.”

Argenis and Vanessa Gutierrez both got their first shot when Price returned the following week.

‘THIS IS WHY WE WENT INTO MEDICINE’

In early February, Black people had received fewer than 13% of first doses of COVID-19 vaccine, despite making up nearly 23% of the state’s population. That gap has narrowed, so that Blacks now account for 18% of first doses, according to the state Department of Health and Human Services. Hispanic residents are now as likely to be vaccinated as non-Hispanics.

The narrowing of those gaps has taken concerted efforts by health care organizations and volunteers across the state, including the Sister Circle.

In addition to media attention, the Sister Circle has begun to collect awards for its vaccination efforts. This month, the doctors were among WakeMed employees who received the annual Pyramid Society Award for helping improve community health, and WakeMed is producing a commercial that will highlight their work.

The recognition is gratifying, the doctors say. But Monroe says she also wonders why reaching out to historically marginalized communities should be so special.

“Why is it so unique and interesting a story that you promote equitable access?” she says. “It’s flattering but also disappointing.”

As the doctors prepared to be filmed walking up a Southeast Raleigh street for the commercial, Dr. Tiffany Lowe-Payne, a family physician, said she didn’t mind the attention if it helps shine a light on health care inequality.

“This was our way of making a small difference,” Lowe-Payne says. “We just wanted to do good.”

The doctors all say their vaccination work felt empowering and fulfilling, as they took on both racial inequality and a deadly disease at the same time.

Benoit-Wilson says there were several points when the doctors looked at each other and said, “This is why we went into medicine.”

Dr. Jacqueline Hicks, a primary care physician, said months of battling a deadly disease and meeting patients by computer to avoid spreading the virus had left her worn down and anxious.

Bringing the vaccine to people who needed it lifted her spirits, Hicks says.

“It ignited my love of health care again,” she says. “It made me realize why I do what I do. Because there is a need there for me to be in the place that I am.”

Members of the Sister Circle don’t expect to drift apart or stop working in the community when or if COVID-19 goes away.

The doctors say there are still health care disparities in low-income and minority communities, and that’s something they plan to confront somehow, together.

“We are brainstorming,” Hicks says. “I do think you will hear more from us.”